Organotin compounds are those with tin linked to hydrocarbons.

Organotin compounds or stannanes are chemical compounds based on tin with hydrocarbon substituents. Organotin chemistry is part of the wider field of organometallic chemistry.[1] The first organotin compound was diethyltin diiodide, discovered by Edward Frankland in 1849. An organotin compound is commercially applied as a hydrochloric acid scavenger (or heat stabilizer) in polyvinyl chloride and as a biocide. Tributyltin oxide has been extensively used as a wood preservative. Tributyltin compounds are used as marine anti-biofouling agents. Concerns over toxicity[2] of these compounds (some reports describe biological effects to marine life at a concentration of 1 nanogram per liter) have led to a worldwide ban by the International Maritime Organization. n-Butyltin trichloride is used in the production of tin dioxide layers on glass bottles by chemical vapor deposition.

Organotin compounds can be synthesised by reaction of a Grignard reagent with tin halides for example tin tetrachloride. An example is the organic synthesis of tributyl-[(Z)-5-phenyl-2-penten-2-yl]stannane:[3][4]

The Wurtz-like coupling of alkyl sodium compounds with tin halides yield tetraorganotin compounds. Another method is an exchange reaction of tin halides with organoaluminium compounds (AlR3). Triorganotin halides can be prepared in the Kocheshkov redistribution reaction.

Organotin compounds are used commercially in a wide range of applications such as biocides, insecticides, chemical intermediates and as catalysts.

Stannoles are the structural analogs of pyrrole. Unsaturated organostannanes also exist: stannenes are compounds of the type RRC=SnRR with a formal double bond (also see stannabenzene) and distannenes have a tin to tin double bond as in RRSn=SnRR. A stannyne contains a carbon to tin triple bond and a distannyne a triple bond between two tin atoms (RSnSnR) . Tin radicals are called stannyl radicals and tin carbenes stannylenes (RSn:)[8]

Unlike their carbon analogues, tin compounds can also be coordinated to five and even six atoms instead of the regular four. These hypercoordinated compounds usually have electronegative substituents for stabilization. Lithium pentaorganostannates were first detected and characterized in solution in 1986,[9] while in the subsequent year a six-coordinated tetraorganotin compound was reported.[10] In 2007 a crystal structure of room-temperature stable (in argon) all-carbon pentaorganostannane was reported as the lithium salt with this structure:[11] 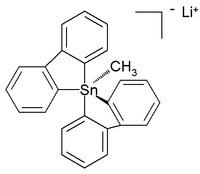