Orange is a mobile network operator and internet service provider in the United Kingdom, which launched in 1994. It was once a constituent of the FTSE 100 Index but was purchased by France Télécom in 2000, which then adopted the Orange brand for all its other mobile communications activities. Orange UK has since merged with Deutsche Telekom's T Mobile UK to form a joint venture, Everything Everywhere. Orange UK has over 17 million customers through its mobile and broadband services.[2]

Microtel Communications Ltd. was formed in April 1990 as a consortium comprising Pactel Corporation, British Aerospace, Millicom and French company Matra (British Aerospace soon acquired full control of the company). In 1991 Microtel was awarded a license to develop a mobile network in the UK, and in July 1991 Hutchison Telecommunications (UK) Ltd acquired Microtel from BAe. BAe was paid in Hutchison Telecommunications (UK) Ltd. shares, giving the company a 30% share. Hutchison Whampoa held 65% and Barclays Bank the remaining 5%. Microtel was renamed Orange Personal Communications Services Ltd. in 1994. The Orange brand, at the time an unusual name for a telecommunications firm, was created by an internal team at Microtel headed by Chris Moss (Marketing Director) and supported by Martin Keogh, Rob Furness and Ian Pond. The brand consultancy Wolff Olins was charged with designing the brand values and logo and advertising agency WCRS created the Orange slogan "The future's bright, the future's Orange". The Orange 1800-MHz GSM network was launched on 28 April 1994. Orange plc was formed in 1995 as a holding company for the Orange group.

The company was bought by Mannesmann AG in October 1999.[3] Vodafone subsequently acquired Mannesman in February 2000[4] and, not being allowed to hold two mobile telephone licences in the UK, decided to sell Orange UK to France Télécom in May 2000.[5]

France Télécom subsequently rebranded all its mobile telecommunications as Orange. The company was initially 100% owned by France Telecom (although there were and still remain minority investors in some of the national operating companies). In 2001 15% was sold in an IPO, but in 2003 the outstanding shares were bought back by France Telecom.

On September 8, 2009 France Telecom's Orange and T-Mobile parent Deutsche Telekom announced they were in advanced talks to merge their UK operations to create the largest mobile operator with 37% of the market. The long-term future of either brand is unclear though both would be retained for the first eighteen months at least.[6]

Consumer Focus and the Communications Consumer Panel sent a joint letter to the then Competition Commissioner Neelie Kroes in December 2009 asking for the merger to be investigated by authorities in the United Kingdom, rather than Brussels.[7] The British Office of Fair Trading joined this call by asking the EU to allow it to investigate the proposed deal in February 2010, saying that it believed the merger could have a 'significant' effect on competition.[8]

On 1 March 2010 the European Commission approved the merger, on the condition that the combined company sell 25% of the spectrum it owns on the 1800 MHz radio band and amend a network sharing agreement with smaller rival 3.[9]

On 1 April 2010 Deutsche Telekom and France Telekom finalised the deal and completed the merger of their UK based operations, causing Orange UK and T-Mobile UK to cease to exist, although the brands will be maintained for at least 18 months.[10]

On 11 May 2010 it was announced that both the Orange and T-Mobile brands will remain on British high streets, although their new merged parent company will be called Everything Everywhere.[11] 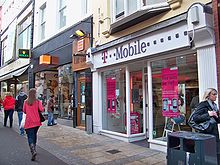 Orange and T-Mobile shops in Leeds.

As with other prepaid plans, pay as you go mobile users are given the option to top-up their phone via a swipe card, over the internet, by voucher bought printed as a receipt from a till or via a credit or debit card.

The pay monthly service gives customers an option of 1, 12, 18 or 24 month contracts. The contracts come 'bundled' with minutes, text messages and within some contracts data and insurance services; additional charges can be incurred for Multimedia Messaging Services (MMS) and Mobile Data services. The 18 and 24 month contracts usually come bundled with a free phone, whereas the 30 day and 12 month plans tend to be 'SIM Only' i.e. the customer provides their own phone. SIM Only plans usually have more minutes and texts than their full phone contract equivalent, as there is no phone cost to factor in.

Orange UK operates a GPRS, EDGE and 3G service and is in the process of rolling out a HSDPA network. Orange's 2G network covers 99% of the UK population and has the largest integrated 3G/2.5G network in the UK, Orange claimed in 2008 it spent up to £1.5 million per day investing in its network.[12] In 2009, Orange UK decided to outsource its mobile network. Therefore, in March 2009, Nokia Siemens Networks[13] was chosen to manage, plan, expand, optimise and provide maintenance services for the Orange UK 2G/3G mobile network for the next five years.[14]

In addition to this Orange UK provides DSL services, under the same brand. Originally operated as Freeserve in the UK it was bought-out by France Telecom, rebranded as Wanadoo and on 1 June 2006 Wanadoo was rebranded Orange. When Orange launched its DSL broadband service it offered it for 'free', joining TalkTalk in the foray for market share.[15] The company has attempted to converge its mobile and DSL broadband products and like its competitors offers DSL broadband services alongside its mobile services, at a subsidized rate (up to £15 off full price per month for Orange mobile customers in an Orange Broadband network area - the prices quoted in Orange publications include these discounts). Orange now offers 'triple-play' services converging mobile, landline and DSL broadband. Orange UK on its highest broadband service used to offer a Livebox which integrates VoIP technology as well as WiFi, but in more recent times, this has router has been replaced by a Netgear router. It has been confirmed that Orange intends to launch a video on demand service through its DSL broadband service.

In April 2006 Orange changed its contract offering by offering four packages to customers, each aimed at different lifestyles and differentiating its offering. Amid much amusement Orange changed the names of its packages to animals: Dolphin, Canary, Racoon and Panther. On some plans there are unlimited minutes (to landlines or Orange UK mobiles), texts or data. In addition to this Orange offers dedicated business plans- Solo and Sense (a sharer plan). Orange also offers 'magic numbers'- unlimited free calls to other Orange UK mobiles on contract or "talk for an hour, pay for a minute" on PAYG (you will have to add it as your "magic number").

Later in April 2008 Orange extended its animals to Pay as you go customers, introducing Dolphin, Raccoon, Canary, Camel and Monkey. Dolphin, Monkey and Canary offer bonuses, whilst Raccoon is a discounted call rate and Camel is for a call-abroad tariff giving discounted calls to foreign countries.

Orange, like other mobile networks, offers an "Internet Everywhere" tariff on pay as you go, pay monthly and business plans. The tariffs names for pay monthly were aligned with the animals theme in May 2010 and Orange now offers both Dolphin and Racoon plans for internet use available on both 1 month and 12 month contracts. In August 2011, the price plans were revised, and names changed to Small, Medium, and Large. Similar to with home broadband, Orange mobile customers receive a £5 discount on their mobile broadband plan. The business plans remained as "Business Everywhere". The 12 month plans come with a USB modem (or dongle) for free. The customer is required to pay a small price for the dongle on the 1 month plans. A portable WiFi dongle can also be purchased, dubbed "Mobile WiFi". The service operates across the network's EDGE, 3G, HSDPA and HSUPA network and offers speeds of up to 3.6 Mbit/s. Orange announced in June 2008 that this speed would be increased to 7.2Mbit/s in the top 30 UK cities and 14.4 Mbit/s in the top 5 cities.[15] 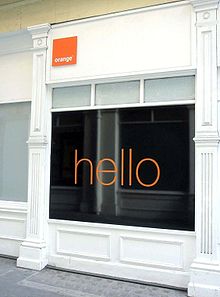 An Orange Shop in London, UK

Orange, like its competitors, operates a retail estate, with over 300 stores. These are branded as "The Orange Shop" and operate as an indirect sales channel. Orange also has some concession stores in HMV branches across the UK.

Contracts and pay as you go phones with Orange are also available from other retailers, such as Carphone Warehouse, Phones4u, Argos and smaller independent mobile phone dealers, operating either in physical retail, online, through call centres or even supermarkets.

Orange were the first British mobile phone network whose products could be bought online, from the UK's first online mobile phone dealer Mobiles.co.uk.[16]

In April 2010, Gold Spots featuring specific forthcoming films replaced the Orange Film Funding Board parodies. The new adverts, promoting specific movies released by 20th Century Fox, feature the stars of the movie filming scenes in-character of crassly incongruous Orange product placement, before breaking character to complain. The first advert featured the cast of The A-Team, followed by a spot starring Jack Black in Gulliver's Travels, followed by a spot Jesse Eisenberg and Anne Hathaway in Rio, followed by a spot in Diary of a Wimpy Kid: Rodrick Rules.

In addition to this Orange has offered "Orange Wednesdays" since 2003. This enables any Orange customer be they pay as you go, pay monthly or an internet customer able to apply for 2 for 1 cinema tickets at participating cinemas, by text message. This was a result of Orange attempting to increase cinema visits during the quiet weekly periods. The Orange Wednesdays promotion also allows Orange customers a 2 for 1 main courses with complimentary appetizers at PizzaExpress restaurants. Both the cinema ticket and meal offers require only a text ticket from Orange, which is entered at point of purchase.[17]

In spirit with Orange's commitment to cinema Orange sponsors the British Academy of Film and Television Arts Awards which includes an award in its own name- the Orange Rising Star Award.

Orange UK has also shown a commitment to music which has included partnering with the Glastonbury Festival to provide mobile charging facilities and offers a music bursary.[18]

Orange also has many other lucrative partnerships through its parent company France Télécom to promote the Orange brand throughout the world.

Orange's previous slogan, "The future's bright – the future's Orange" was used for many years and became extremely well known, so much so that in its later years the second half of the slogan tended to be dropped as unnecessary.[citation needed]

Since July 2008 "I am"' has become the main slogan, shortened from "I am who I am because of everyone", however subsidiary slogans will be used to describe the company's products and services, for example "I am more focus, less fuzz" is used to describe the Samsung Soul handset.