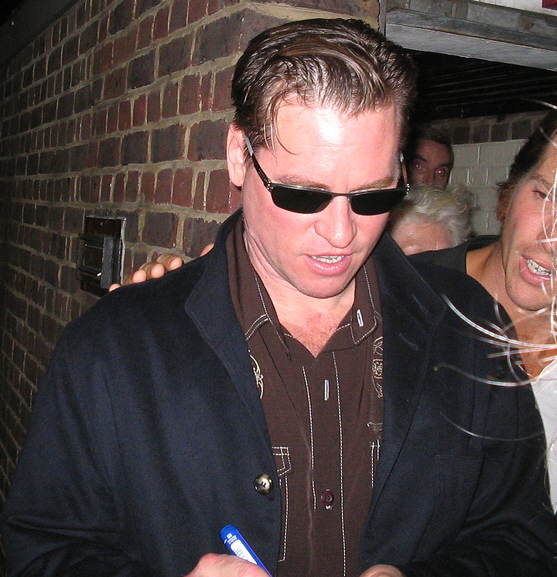 During the 1990s, Kilmer gained critical respect after a string of films that were also commercially successful, including his roles as in "The Doors", in 1993's "Tombstone", and in 1995's "". During the early 2000s, Kilmer appeared in several well-received roles, including "", "Spartan", and acclaimed supporting performances in "" and "Alexander", and he is set to star in the new series of "" as the voice of .

Kilmer, who was raised a ,

In 1981, Kilmer co-authored and starred in the play "How It All Began",

After several delays, director finally started production on the film, "The Doors", based on the popular band of the same name. Kilmer allegedly memorized the lyrics to all of lead singer 's songs prior to his audition, and sent a video of himself performing some "Doors" songs to director Stone, which Oliver Stone actually claims was detrimental to his audition. After Kilmer was cast as Morrison, he prepared for the role by attending Doors tribute concerts and reading Morrison's poetry.

In 1993, Kilmer played in the western "Tombstone" alongside , in what some say is one of Kilmer's finest performances. 1995 saw Kilmer star in "", a 3D film, and in one of his biggest roles, playing in the big budget "", which also starred , and . The film was a success at the box office,

In December 1993, "" director had seen "Tombstone", and was most impressed with Kilmer's performance as . Schumacher felt for him to be perfect for the role of the Caped Crusader, though at the time, the role was still 's.

In February 1996, Kilmer decided not to return for a sequel (1997's "Batman & Robin" with replacing Kilmer), feeling (much as had when he vacated the role) that Batman was being marginalized in favor of the villains.

In 2003, Kilmer starred alongside in the drama/thriller "Wonderland", as well as appearing in "", where he again worked with "Willow" director . The next year, he starred in "Spartan", where he played a government who is assigned the task of rescuing the kidnapped daughter of the President. He received -like training in preparation for the role.

Kilmer was in negotiations with (a leading director of -related films) to play the lead role in a film entitled "Prophet: The Story of Joseph Smith", although the project never materialized.

He will also star in the film opposite .

He was working on writing the movie about the life of , the founder of the church in 2005.

He is the voice of for the "Knight Rider" TV pilot movie which aired on , on , and reprised the role for the television series.

He is set to appear as the main antagonist "Mongoose" in a live TV series adaptation of the comic/video game of "XIII" in 2009.

He dated supermodel in the 1990s. They had a big fight over her hat advertising a bar whose owner Kilmer disliked. He admitted that he was being unreasonable while Cindy was very comfortable with advertising.

Kilmer was married to , an actress and former lead singer of , from March 1988 to February 1996. The two met while working together on the film "Willow".

Following their appearance together in "Top Gun", Kilmer and co-star reportedly have taken their on-screen conflict off-screen. Reports have classified the two as holding a vitriolic hatred of one another. Kilmer even refused to participate in a charity beach volleyball game with Cruise on the grounds that he was, quote, "dangerous".

Other actors have also noted that he prepares for his roles extensively and meticulously, it is often done to the chagrin of cast and crew (although many have argued that this should be seen as a tremendous quality rather than a flaw). Kevin Jarre, the original director of "Tombstone", said that Kilmer once told him, "I have a reputation for being difficult. But only with stupid people."