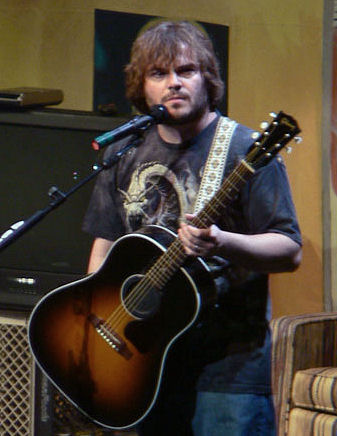 Thomas Jack Black, Jr. (born August 28, 1969) is an American , and . With his friend , he makes up one half of the comedy and rock music duo . The group has two albums and a full-length movie. His acting career is extensive, starring primarily as bumbling, cocky, but internally self-conscious outsiders in comedy films. He is a member of the , a group of comedians who have appeared together in several Hollywood films, and has been nominated for a award.

Black was born in California, the son of two engineers, Judith (née Cohen) and Thomas William Black; his mother worked on the .

When he entered high school, his parents suggested that he should transfer to the Poseidon School, a private secondary school engineered specifically for students struggling in the traditional school system. [cite web | title = Jumpin' Jack Black| publisher = The Sidney Sun Herald | date = | url =http://www.smh.com.au/articles/2003/11/02/1067708067856.html?from=storyrhs | accessdate =2006-11-20] Black eagerly accepted the proposition, afraid that he would only be bullied if he remained in public school.

He also attended the Crossroads School, where he excelled in drama. Black later attended but dropped out during his sophomore year to pursue a career in the entertainment business, at which point his father discontinued his financial support. Fellow UCLA veteran later cast Black in "". He also had recurring roles on the series "Mr. Show".

Black's acting career began with primetime TV. He played roles on several shows such as: "" (Taxi Driver), "Life Goes On" (skinhead), "" (Kevin Wilkins, prom king), HBO's , and (Curtis Williams). In a Season 3 episode of "", titled "D.P.O.", Black played Bart 'Zero' Liquori, friend to Darren, a teen who could cause lightning strikes, played by . Black appeared in an un-aired for a show directed by called "" where he played an ex-astronaut pursued by actor . He was accompanied by his friend who had merged with a motorcycle, voiced by .

His career soon led to leading roles in films such as "", "Orange County", "", "Envy", "", "King Kong", and "". Black starred in two films in 2006: "", in which he played a Mexican friar following his childhood dream of wrestling and pursuing true victory by fighting for the children of an orphanage, and ', a fictionalized account of the band's formation and their quest to obtain a "supranatural" guitar pick. "Nacho Libre" opened on June 16, 2006; ' was released November 22, 2006.

Jack Black has appeared numerous times on the "untelevised TV network" festival , starring in the shows "Computerman", "Timebelt", and "Laserfart". He also provided an introduction for the un-aired sketch comedy, "", donning a Colonial-era military uniform. In the introduction, he claims to be (and takes credit for the accomplishments of other American Presidents such as and ), and gives viewers a general idea as to what they should expect from the show. Black has also guest starred in the show "" as a bear trap store owner.

Black hosted the 2006 "Nickelodeon Kids Choice Awards" on April 1, 2006 and hosted it again on March 29, 2008. He also appeared on the video music awards on August 31, 2006. He is also a member of the , which also includes , , , , , and . Jack Black has made five appearances on "": three times as a host, once as a musical guest (with Kyle Gass as Tenacious D), and another appearance with Tenacious D, not as a host or musical guest. He appeared on 's Internet video show . [cite web|url=http://acceptable.tv|title=acceptable.tv |accessdate=2007-03-24]

Black has also voice acted for "" episode "", voicing the friendly owner of the rival comic book store, Milo. In 2008, he will be voicing the main character, roadie Eddie Riggs, in the rock-themed action-adventure video game, . Black also appeared in a celebrity edition along with , and others and walked away with $125,000.

In 2008 he appeared in three films. Black starred alongside in the film "", which was written and directed by . He voiced the main character, Po, in the 2008 film "" to high critical praise. Finally, he appeared as Jeff 'Fats' Portnoy in "".

Black is the lead singer for the rock comedy band . They have released two albums, a self-titled debut, and the follow up, "", from which one of their songs "The Metal" was used in the music video game "" and "Master Exploder" also went on to be used in music video game ". "These two songs feature in the film "Tenacious D in: The Pick of Destiny". The film, directed by Tenacious D veteran Liam Lynch, features recurring characters such as Lee the superfan and Sasquatch. cameos (both Black and Gass appeared in Robbins' 1999 film ""), as does as . also makes an appearance as a worker at , and also another appearance in the music video for Tribute."

Tenacious D recently helped the United Mitochondrial Disease Foundation [ [http://www.UMDF.org Home - UMDF ] ] to raise awareness and funds in San Diego on June 16, 2007. Tenacious D can also be seen performing in the film , where the duo are performing at a "Save the Environment" party. Black was also a guest star on an episode of "" entitled "Ellen the Musical", alongside Broadway star and teenage singer-actress . On the show, besides singing, he discussed his then-upcoming film "Nacho Libre" with the host.

Black has also appeared on Dave Grohl's "Probot" album, providing vocals for the hidden song "I Am The Warlock", and Lynch's "" album, providing vocals for the song "Rock and Roll Whore". Black performed a cover of 's "" in the last sequence of "High Fidelity". He lent his musical abilities to the song "Burn the Witch" with rhythmic stomps and claps, some performed with his eyes closed.

Regarding exercise, Black has been quoted as saying that Ultimate is the only form of exercise that he doesn't hate.Black dated actress and comedian from 1997 until 2005. In January 2006, he became engaged to (daughter of the double bassist , and sister of violinist and singer ). Haden herself is an accomplished cellist. Both attended Crossroads school, but met again 15 years after graduating, at a friend's birthday party. Black proposed marriage around 2005 with a $50,000 "Neil Lane" ring. They married on March 14, 2006, in . [ [http://www.people.com/people/article/0,,1172114,00.html Jack Black Elopes with Tanya Haden - Marriage, Jack Black : People.com ] ] Their son, Samuel "Sammy" Jason Black, was born on June 10, 2006, at in . [ [http://www.people.com/people/article/0,,1203366,00.html It's a Boy for Jack Black, Wife - Birth, Jack Black : People.com ] ] On May 23, 2008, Black and his wife welcomed their second child, another boy, whom they named Thomas "Tommy" David Black. [ [http://www.usmagazine.com/jack-black-welcomes-son Usmagazine.com | Report: Jack Black Welcomes Son ] ]

Black's comedic style combines many key elements from both sides of the traditional . Black typically begins a skit in which he presents an earnest introduction to a premise or subject that quickly reveals itself to be flawed or fundamentally ludicrous. Black then switches completely to a far-extreme caricature of human emotion.

His would-be straight-man Gass often functions to trigger these outbursts. Tenacious D’s subject matter illustrates this technique. In "Tribute", Tenacious D tells a story in which they claim to have performed, "The Greatest Song in the World," for a, "Shiny Demon," who would otherwise "EAT THEIR SOULS". In "", Black doesn’t merely discover a new vocal technique, he discovers what he refers to as "the most powerful tool in singing technology since ". Black's skits also use the catchphrase 'more cushion for the pushin', a self-deprecating reference to his abdominal body fat.