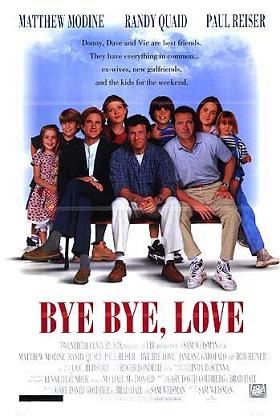 
"Bye Bye Love" is a 1995 comedy-drama that deals with the central issue of divorce. It was directed by and written by and . It stars , , , , , , , and . Goldberg and Hall stated that they included in the script several fictionalized accounts of events that had happened to divorced friends of theirs.

Also acting in the film were , and in his last movie role. A not-yet-famous has one line ("Reefer?") as a disc jockey at a party.

The film's soundtrack includes performances by , , , Ben Taylor, and .

The film was not considered particularly successful, grossing less than $13 million in the U.S. in its theatrical run. It has a 16% rating at . Although overall critical reaction to the film was not positive, Janeane Garofalo's performance as the "date from hell" got good reviews, and earned her a nomination for an . Many of the reviews complained that the movie played more like an episode of a than a feature film.

It was released on DVD in February 2005, possibly in response to the growing popularity of .

Dave is the father of two children: Ben () and Michelle (). Dave dates Kim (), a woman much younger than he. This does not make his ex-wife Susan (Brenneman) happy, nor do his children care for Kim all that much. He also does not realize there are some underlying problems in his relationship with Kim. Dave's profession is not specified, but he may be a professor or a doctor. He appears to be the wealthiest of the three friends.

Vic (Randy Quaid) is a wrestling coach/driver's education teacher. He is the father to Meg, Jed, and toddler Lindsay. Vic is more than happy to be divorced from his wife, Grace (). He assumes that she uses the child support to spend on herself. Vic is also not a big fan of her boyfriend, Gerald. He is probably the most loving father of the group as his children are very well-behaved. However, he knows that he is not perfect.

Donny is a real estate agent and has a teenage daughter, Emma (Dushku). Emma is more interested in hooking up with teenage McDonald's employee, Max Cooper (), than spending time with her father. Donny always feels ex-wife Claire () will come back to him. He also feels he is in competition with Emma's rich stepfather, Phil (), who has more than provided for Claire and Emma. Donny's closest ally through all of this is Susan, to whom he is secretly attracted.

Other supporting characters in the film include: Dr. David Townsend (Reiner), a radio therapist whom the three fathers listen to regularly; Walter Sims (Ed Flanders), a retired auto worker who works at McDonald's and forms a friendship with Max; and Lucille (Garofalo), a woman who Vic takes out on a blind date and finds out she has multiple issues with everything.

Trivia: The characters Meg and Emma are played by and respectively. Both these actresses went on to play main roles on the television series "Buffy the Vampire Slayer", as did . While Benson shared episodes with both Dushku and Crouse, the three actresses never spoke lines to or were featured in the same scenes as each other.