Timeline of the Irish War of Independence

Timeline of the Irish War of Independence

This is a timeline of the Irish War of Independence (or the Anglo Irish War[1]) of 1919–1921. The Irish War of Independence was a guerrilla conflict and most of the fighting was conducted on a small scale by the standards of conventional warfare. Although there were some large scale encounters between the Irish Republican Army and the British state forces (Royal Irish Constabulary and Dublin Metropolitan Police paramilitary units—the Black and Tans and the Auxiliary Division—and the regular British Army), most of the casualties were inflicted in assassinations and reprisals on either side. The war began with an unauthorized ambush by IRA volunteers Dan Breen and Seán Treacy at Soloheadbeg in 1919 and officially ended with a truce agreed in July 1921. However, violence continued, particularly in the disputed territory of Northern Ireland until mid 1922. In the south of Ireland, the war of Independence was immediately followed by the Irish Civil War between supporters and opponents of the Anglo-Irish Treaty. 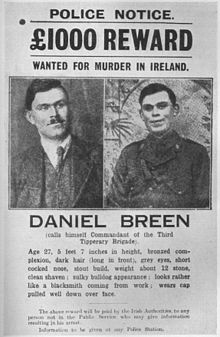 The Seán Hogan flying column during the War of Independence 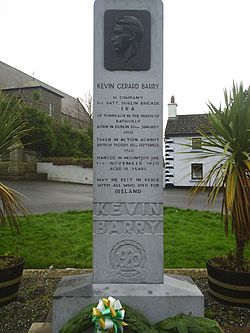 Monument to Kevin Barry in Rathvilly, Co Carlow. Barry was hanged on 1 November 1920, for his part in the killing three British soldiers on 20 September 1920 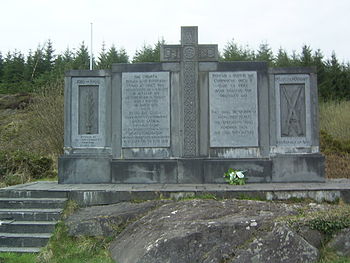 Monument to the Kilmichael ambush of 28 November 1920, in which 3 IRA volunteers and 17 British Auxiliaries were killed 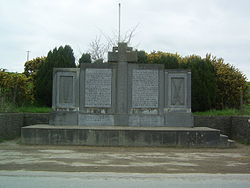 Monument to the Crossbarry ambush of March 19, 1921