County Leitrim (Irish: Contae Liatroma) is a county in Ireland. It is located in the West Region and is also part of the province of Connacht. It is named after the village of Leitrim. Leitrim County Council is the local authority for the county. The population of the county is 31,778 according to the 2011 census.[1]

Leitrim is the 26th largest of the 32 counties by area and the smallest by population.[2] It is the smallest of Connacht’s 5 counties in both size and population. Leitrim is bordered by the counties of Donegal to the north, Fermanagh to the north-east, Cavan to the east, Longford to the south, Roscommon to the south-west and Sligo to the west. Fermanagh is in Northern Ireland while all the other neighbouring counties are within the Republic. 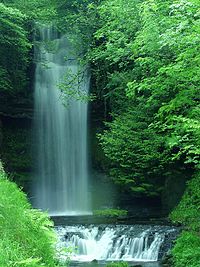 Leitrim has a dramatic hilly and mountainous landscape in its north-west and is relatively flat in the south-east, each separated from the other by Lough Allen in the middle of the county. It is a tranquil area of great natural beauty, consisting of lofty mountains, deep valleys, pastures, lakes, rolling hills and rivers. Leitrim has the shortest length of coastline of any Irish county that touches the sea. At Tullaghan, the coastline is only 2.5 km long.[3] Leitrim offers scenic panoramic vistas of Lough Allen and the River Shannon. The Shannon is linked to the Erne via the Shannon-Erne Waterway. Notable lakes include: 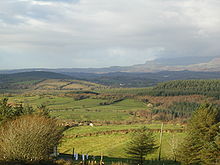 In ancient times Leitrim formed the western half of the Kingdom of Breifne. This region was long influenced by the O'Rourke family of Dromahair, whose heraldic lion occupies the official county shield to this day. Close ties initially existed with East Breifne, now County Cavan, and the O'Reilly clan seated there. The Normans invaded in the 13th century and occupied the south of Breifne. Much of the county was confiscated from its owners in 1620 and given to Villiers and Hamilton. Their initial objective was to plant the county with English settlers. However, this proved unsuccessful. English Deputy Sir John Perrot had ordered the legal establishment of "Leitrim County" a half-century prior, in 1565. Perrott also demarked the current county borders around 1583. Five forests are traditionally said to have stood in Leitrim up till the 17th century.

Leitrim was first hit by the recession caused by the mechanisation of [linen] weaving in the 1830s and its 155,000 residents (as of the 1841 census) were ravaged by the Great Famine and the population dropped to 112,000 by 1851. The population subsequently continued to decrease due to emigration. After many years, the wounds of such rapid population decline have finally started to heal. Agriculture improved over the last century. Leitrim now has the fastest growing population in Connacht.

Working of the county's rich deposits of iron ore began in the 15th century and continued until the mid 18th century. Coal mining became prominent in the 19th century to the east of Lough Allen in Sliabh an Iariann and also to the west in Arigna, on the Roscommon border. The last coal mine closed in July 1990 and there is now a visitor centre.[4] Sandstone was also quarried in the Glenfarne region. William Butler Yeats spent the turn of the twentieth century fascinated with Lough Allen and much of Leitrim. In the northwest, 11 km from Manorhamilton can be found Glencar Waterfall, which was an inspiration to Yeats and is mentioned in his poem The Stolen Child.

Due to its small size, low population density and high migration, the county has been known as a classic example of rural depopulation that is a big problem in Connacht, which is already the least populated province. Evidence of this includes Leitrim been splint between Sligo and Roscommon for general elections.

The county is divided into two constituencies for elections to Dáil Éireann. They are: Roscommon-South Leitrim and Sligo-North Leitrim. This division which was first used for the 2007 general election proved highly controversial as it resulted in no TD whose domicile was in the county. As of 2011, the only Leitrim based TD is Michael Colreavy (Sinn Féin). 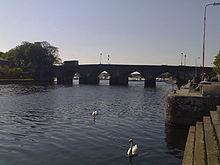