Timeline of the Irish Civil War

Timeline of the Irish Civil War

This is a timeline of the Irish Civil War, which took place between June 1922 and May 1923. It followed the Irish War of Independence (1919–1921), and accompanied the establishment of the Irish Free State as an entity independent from the United Kingdom.

The conflict was waged between two opposing groups of Irish nationalists: the forces of the new Irish Free State, who supported the Anglo-Irish Treaty under which the state was established, and the Republican opposition, for whom the Treaty represented a betrayal of the Irish Republic.

The Government of the Irish Free State (established as a Provisional Government in January 1922 and as a full government in December 1922) was ultimately victorious. The anti-Treaty forces called a ceasefire in April 1923 and ordered their men to "dump arms" in May 1923.

The war involved both conventional warfare (late June–August 1922) when the Free State forces took the major towns and cities, and then a longer period of guerrilla warfare (September 1922–April 1923) as the anti-Treaty forces were gradually brought to a standstill. 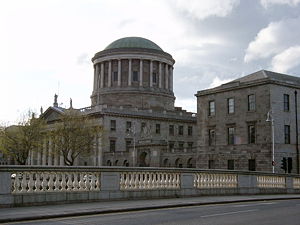 The Four Courts, occupied by Anti-Treaty forces in April and scene of the start of the civil war in June. 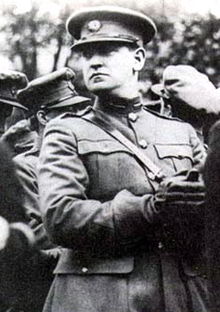 Michael Collins, in his uniform as National Army Commander-in-Chief at President Griffith's funeral, one week before his own death 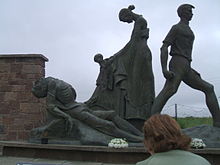 Memorial designed by Yann Goulet to the Republican soldiers killed by Free State troops at Ballyseedy, County Kerry in a mass killing of prisoners on 7 March 1923. The month of March was marked by a series of such atrocities in Kerry

A range is given where casualties are reported but not confirmed.

*this is not a definitive total, but rather what could be found in this article.

Status of those killed

*Civilian casualties, may be far higher, casualties for the Dublin fighting are given as 250, but it is not clear how many of these were killed and how many wounded.

(Statistics are likely to be incomplete, Free State government sources stated that between 540 and 800 National Army soldiers were killed in the war. Historian Michael Hopkinson, in Green against Green, p272-3, states "There are no means by which to arrive at even approximate figures for the dead and wounded. Mulcahy stated that around 540 pro-Treaty troops were killed between the Treaty's signing and the war's end; the government referred to 800 army deaths between January 1922 and April 1924. There was no record of overall Republican deaths, which appear to have been very much higher. No figure exists for total civilian deaths.")