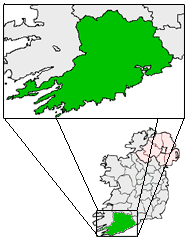 Situated on the coastline of East County Cork, the bustling and picturesque town of Youghal is regarded as one of the most popular tourist destinations in Ireland. The historic walled seaport town of Youghal has many historic buildings and monuments within its ancient town walls, has been designated as an Irish Heritage Port by the Irish Tourist Board.

Fishing in the River Blackwater (noted for salmon, trout and excellent coarse fish), golf, sailing, angling, pitch and putt and yachting are just some of the facilities that are located either nearby or in the town. The town of Youghal continues to experience sustained economic decline and employment in the town itself has seen a marked decreased in 2008. Many of the town's population commute to work in the Cork or Waterford region.

Youghal received its charter of incorporation in 1209, but the history of settlement on the site is much longer, with a Norse settlement being present in the 9th century, the Church of Coran in the town's western suburbs dating from the 5th century, and evidence of habitation at nearby Newport.

Notable buildings in the town include Myrtle Grove and St Mary's Collegiate Church, thought to have been founded by around 450. The church was rebuilt in Irish Romanesque style c. 750, and a great Norman nave was erected in c. 1220. It is one of the few remaining medieval churches in Ireland to have remained in continuous use as a place of worship. The used Youghal as a base for their raids on monastic sites along the south coast of Ireland, and a stone in St Mary's Collegiate Church still bears the etched outline of a . Since the 16th Century it has been the place of worship of the congregation of Youghal and its surrounding areas.

The town was badly damaged on November 13 1579, during the , when it was sacked by the forces of . Desmond had the town's garrison massacred, the English officials were hanged and his soldiers looted the townspeople. The down town area of Youghal is among the best preserved in Ireland. The first record of the walls is a charter of 1275, granted by King Edward I, for their repair and extension. In 1777, the town's Clock Gate was built on the site of Trinity Castle, part of the town's fortifications. The Clock Gate served the town as gaol and public gallows until 1837; prisoners were executed by being hanged from the windows. Tynte's Castle is a late 15th-century urban tower house. There are also 17th-century almshouses, constructed by . The Collegiate church (Church of Ireland) [http://www.youghal.cork.anglican.org/collegiatechurch St. Mary's Collegiate Church] in the town still contains many monuments, including the tomb of Richard Boyle himself. The Mall House and its promenade were built in 1779, and are now used as Youghal's Town Hall. The town's Water Gate was built in the 13th century to provide access through the town walls to the docks. Also known as Cromwell's Arch, it was from here that left Ireland in 1650, having overwintered in the town after his campaign in Ireland.

During the 17th century Youghal was one of Ireland's main ports, far more important than Cork which was described as 'a port near Youghal.' However, from the 18th century onwards, Youghal suffered much the same fate as nearby Ardmore: as ships became larger, they were unable to get into Youghal Harbour because of a shallow sandbar at its moùth.`

In 1840 a large hoard of coins were dug up in a field near Youghal weighing between 'three hundred and four hundred ounces' [http://treasurehunting.tv/?p=115 Coin Hoard Article]

An interesting aside in Youghal's history is that it was the first town in or Britain to have a Mayor when a Mr. William Annyas was elected to that position in 1555.

* Sir was Mayor of Youghal in 1588 and 1599 and lived at Myrtle Grove, the Warden's Residence of the Collegiate Church. The first es in Europe were planted in the gardens of Myrtle Grove in 1585. Myrtle Grove's South Gable is where is reputed to have written part of his poem . The house is not open to the public, except during the summer months when tours are organised for the public.
* Sir , 1st Earl of Cork, 1st Viscount , 1st Baron Boyle of Youghal, Lord High Treasurer of the (although simply known as The Great Earl of Cork), had a substantial residence at Youghal, known today as "The College", close to St. Mary's Collegiate Church. Boyle occupied the office of Sheriff from 1625 to 1626.
* The Countess of Desmond (1464 - 1604), who lived in nearby Finisk Castle is reputed to have fallen to her death at the age of 140 attempting to pick cherries from a tree.
* Communist journalist and his wife Patricia, artist, conchologist and traveller, lived in the town for many years. He described it, memorably, as "standing at a slight angle to the universe".
*Novelist spent some of his early years in Youghal, and featured the town in his short story "Memories of Youghal".
* In 1954, filmed part of there, with the town standing in for New Bedford. A licensed premises in the town still bears the name of the movie. [http://homepage.eircom.net/~youghal/chamber/mobydick/page2.html]
* was appointed Ireland rugby coach in December 2001, replacing Warren Gatland. He had earlier coached Connacht, and was involved in the US Eagles coaching set up with George Hook in the early 1990s.
* (1841-1886), a from , as well as an officer in the during the was born in Youghal.
* (1847&ndash;1919), naturalist.
* (16th April 1800 - 12th September 1849), Writer, Journalist, Historian and anti-Corn Law propagandist. Born in Youghal, died at 20 Herbert Street, Dublin.

Youghal adjoins a number of fine beaches including the famous 5km beach to the east of the town. In 2008, Youghal lost one of its two blue flags. [ [http://www.ireland.com/newspaper/breaking/2008/0507/breaking9.htm Four beaches fail water quality test - The Irish Times - Wed, May 07, 2008 ] ] Untreated sewage continues to flow in to the sea at several points in the town despite attempts by the townsfolk to get Youghal Town Council to act.

In the 1950s and 1960s Youghal was a popular seaside resort, with thousands taking the train to the beach. Many tourists to the town are attracted by its historic buildings and natural surroundings. The town is steeped in history and was once one of the busiest ports in the country, even more important than Cork and Dublin at one time. With the closing of the railway line in the 1970s (see Irish railway history), the town went into a period of decline, reinforced by the difficulties encountered by the town's textile industry. Since the 1990s, aided by favourable property tax concessions, there has been considerable reinvestment and construction to restore Youghal's facilities and popularity.

* is the nearest airport in the region and is located about 40 minutes drive away from Youghal.
* opened on , closed for passenger services on and for goods services on . [cite web | title=Youghal station | work=Railscot - Irish Railways | url=http://www.railscot.co.uk/Ireland/Irish_railways.pdf | accessdate=2007-11-25]