Castlebar (Irish: Caisleán an Bharraigh, meaning "Barry's Castle") is the county town of, and at the centre of, County Mayo in Ireland. It is Mayo's largest town by population. The town's population exploded in the late 1990s, increasing by one-third in just six years, though this massive growth has slowed down greatly in recent years. A campus of Galway-Mayo Institute of Technology and the Country Life section of the National Museum of Ireland are two important local amenities. The town is connected by railway to Dublin and the neighbouring Mayo towns of Westport and Ballina. The town has several small satellite villages around it, such as Breaffy and Parke. The main route by road is the N5. Its economy is primarily service-based. Population as of 2011 is 15,214. 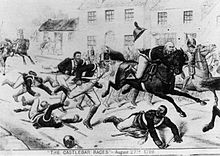 The modern town grew up as a settlement around the de Barry castle, which was built by a Norman adventurer in 1235 and was later the site of an English garrison. The castle was located at the end of Castle Street, where the town river is thought to have originally flowed. A military barracks operates in the town to this day; armed conflict has been the centrepiece of the town's historical heritage. French forces under the command of General Humbert aided in a rout of the English garrison in the town during the failed Irish Rebellion of 1798, which was so comprehensive it would later be known as "The Races of Castlebar". A short-lived provisional Republic of Connaught was declared following the victory and John Moore, head of the Mayo United Irishmen and the brother of a local landowner, was declared its president. His remains are today interred in a corner of the town green, known as the Mall, previously the cricket grounds of Lord Lucan, whose family (the Binghams) have owned and still own large tracts of the town and county. The town received its charter from King James I in 1613, and is today governed by an urban district council, a subdivision of Mayo County Council. The Lake in Castlebar is also known as Lough Lannagh.

The Irish National Land League was founded by Michael Davitt, of Straide in County Mayo, at the Imperial Hotel in Castlebar on 21 October 1879. Castlebar expanded rapidly during the 1980s, 1990s and 2000s largely as a result of the efforts of influential local politicians such as Enda Kenny, Padraig Flynn and Beverly Flynn.

The name of the town comes from the castle built in 1235 (see above). This castle is depicted in the top of the crest, with two yew trees on either side because Castlebar is the county town of Mayo (Irish: Maigh Eo, meaning "plain of the yew trees"). The castle ruins still remain. The crosses represent the parish of Aglish (the official name of the parish of Castlebar). The 1798 'Races of Castlebar' is commemorated with the Pikes in the top left-hand corner. Underneath, the words 'Ar Aghaidh' can be found, which means 'Forward'. 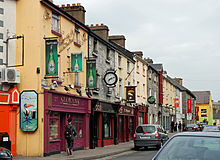 Castlebar is the location for important festivals and traditions, among which is the International Four Days' Walk. A well-established blues music festival in venues across the town takes place on the weekend before the first Monday in June each year. During the 1970s and 1980s the town hosted the International Castlebar Song Contest which was televised nationally on RTE. The Museum of Country Life is located on the outskirts of Castlebar, and is the only branch of the National Museum of Ireland located outside Dublin.

There are Roman Catholic, Church of Ireland (Anglican), Elim Pentecostal and Spiritualist churches in the town. There is a recently-established Mayo male voice choir and Mayo Concert Orchestra. There is also a marching band in the town - one of the few survivng marching bands west of the Shannon Throughout the 1980s and 1990s, Castlebar experienced significant immigration, growth and investment.

A lot of the public houses closed during the building boom during the 1990s. In 1990, Castlebar had 54 licensed premises, although this number had fallen to less than 30 public houses by 2008. Castlebar is a garrison market town; there was a tradition of open air markets mostly selling livestock, which meant there was a healthy daytime drinking trade in Castlebar, but this has disappeared. For a combination of factors since the introduction of the smoking ban and the EU single payment grant to farmers, most public houses offer food to help subsidize the drop in alcohol sales. One of the oldest pubs in Castlebar is John McHale's pub, located on New Line. The pub is known for its sale of a Meejum of Guinness, which is slightly less than a pint. It once officially had 'the best pint of Guinness in Ireland' according to a national tabloid. 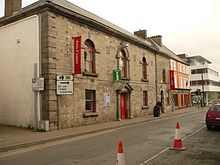 Castlebar is traditionally a market town, and it is still a major destination for shoppers from all over the west of Ireland. It boasts an increasing number of national and international chain stores, and several new shopping areas have been developed in the past 10–12 years on what were considered the outskirts of the town. The modern shopping precinct along Hopkins Road is now the commercial heart of the town, surpassing Main Street. Stores include Argos, Tesco, Dunnes Stores, Aldi, Next and Homebase, as well as smaller names such as McLoughlins Bookshop and Liam Cannons Fruit & Veg.

Castlebar is the second largest retail centre in Connacht, after Galway city. It comes in ahead of Sligo, despite that town's greater population. A survey by consultants Experian showed that €284 million is spent in by shoppers in Castlebar every year. The Irish Retail Centre Rankings show Castlebar is the 12th largest retail centre in the Republic of Ireland in terms of retail spend, and 20th on the island of Ireland overall.[2]

Major renovations have taken place on Main Street, Linen Hall Street and Castle Street in recent months. This has resulted in a more pedestrian friendly environment with attractive features.

Castlebar is a served by the N5 national primary road and the N60 and N84 national secondary roads. In 1990 a relief road was built around Castlebar removing through traffic on the N5 from the main street. This road is a basic 2 lane road with no hard shoulders, and suffers from chronic congestion, particularly in the summer months when thousands of tourists have to negotiate the bottleneck on route to neighbouring Westport and Achill. A bypass of Castlebar of dual-carriageway standard is awaiting funding. 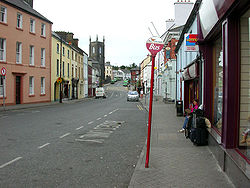 The local Gaelic football and hurling team is the Castlebar Mitchels club; a club with a proud and illustrious past, including 27 Mayo senior football championships and one Mayo senior hurling championship titles. Castlebar Mitchels are second only to Ballina Stephenites in terms of the amount championships won.[citation needed] After a couple of years in the doldrums, the club regained its place amongst Mayo's elite senior football clubs in 2005. The club boasts a very strong youth football structure. McHale Park in Castlebar is one of the major Gaelic Athletic Association grounds in Connacht, with a capacity of 41,000. The Mayo County board has recently built a new stand with dressing rooms and offices underneath and will build fifteen extra rows of seating to the 'Albany' end sometime in the near future. They have also built a new modern press area and TV stand on the Mchale Road side. Other nearby GAA clubs include Breaffy GAA, Parke GAA and Ballyvary Hurling Club.

The local soccer team is Castlebar Celtic, (est 1924) who currently have a team playing in the Mayo Super League and their senior women's side play in the Mayo Premier Division. In addition to this, they have a thriving youth structure in place, providing teams from under 10s to under 18s for boys and under 14 to under 17 for girls, as well as an under 8 Academy. Since the introduction of schoolboy football, the club has seen unmatched success at every age at county, provincial and national level. They play their home games in Celtic Park, in the centre of the town. Their traditional strip is made up of green and white hoops, white shorts and white socks. Castlebar Town FC were formed in the 1970s (as Castlebar United) as an alternative to Celtic. Their strip is made up of black and white striped shirts, black shorts and black socks.

Castlebar RFC, a vibrant Rugby-Union club founded in the 1970s is located at Cloondeash, on the outskirts of the town. There are several pitches and a club house onsite, and the club actively participates in provincial (Connaught Junior League Div.1) and national league competitions. Castlebar are the current Cawley Cup Champions (2009). The Club plays in a navy and light blue strip.

There is an 18-hole golf club in the town, as well as active basketball, racquetball, tennis and other clubs. The council provides an indoor heated swimming pool and there are numerous gyms.

Castlebar also played host to the WOMAA World Martial Games in both 2007 and 2008 which saw hundreds of competitors from all over the world competing over the three day event.

The World Darts Federation will be holding the 2011 World Cup there in September 2011.

The Annals of the Four Masters contain a few references to the Castlebar area, then known as Claenglais:

See also: List of twin towns and sister cities in the Republic of Ireland

Castlebar is twinned with the following places: