Belmullet (Irish: Béal an Mhuirthead, meaning "mouth of the mullet")[2] is a coastal Gaeltacht town with a population of around 2,000 on the Mullet Peninsula in the barony of Erris, County Mayo, Ireland. Its name means the "mouth of the mullet". It is the commercial and cultural centre for the barony of Erris, which has a population of almost 10,000 people.

This was the time of the legend of the Táin Bó Flidhais which concerned the ancient forts at Rathmorgan overlooking Carrowmore Lake and Dún Domhnall at Glencastle on the road leading to Belmullet.

About 1715, according to Pocock, writing on his grand tour, Sir Arthur Shaen 'began building a little town' where Belmullet now stands. The area must have been very wet and marshy at the time because during the reign of Queen Elizabeth I, an Admiral chased pirates into Broadhaven Bay, hauled his boats across the isthmus and caught up with them near the Iniskea Islands. To drain the area and form a passageway from Blacksod Bay into Broadhaven Bay, Shaen had a canal excavated, known thereafter as Shaen's Cut, large enough for small boats to pass through from one bay to the other. However, little 'development of the town occurred and by 1752 the canal was choked up and impassable. In the early 19th century Belmullet consisted of little more than a few thatched buildings.

In 1820 the first post office in Erris opened in the new town of Belmullet. Arthur Rose was the post master. According to Samuel Lewis in his Topographical Dictionary of Ireland, Belmullet 'owes it origin to the establishment of the headquarters of the commander of the coastguard here in 1822'. William Henry Carter had inherited huge tracts of Shaen's land in Erris when he married his daughter and he began to put plans in place to develop the town. He employed Patrick Knight, Engineer to plan the town. A new road was built which connected Belmullet with Castlebar and it was finished in 1824. Carriages could now travel into the area. Work started on the building and in two years there was a large hotel the 'Erris Hotel' in the town.[3]

In 1822 a coastguard station was built. In 1825 William Henry Carter, a local landlord and architect, decided to establish his own settlement and a new pier, large enough to accommodate vessels of 100 tons was built by the Fishery Board and Carter in 1826. W.H. Carter's stated objective was to "create a home market for produce that did not previously exist nearer than thirty miles by land" and his aim was to thrust the older village of An Geata Mór (Binghamstown), a village founded by the powerful Bingham family on the Mullet peninsula into a secondary position.[citation needed] In 1829, Alexander Nimmo, an engineer on the Erris roads, wrote the following 'at Belmullet, the advance is quite surprising; the place only commenced four years ago; it now consists of about seventy respectable houses etc... five ships were loaded with grain and kept; iron hoops and coal were imported; spirits, beer and wine. British manufacturers and tea and sugar were sold; the produce of the fisheries were admitted to a market'.[4] In 1830 a dispensary was built with Dr. Matthew Bournes installed as the first doctor in Belmullet. By 1831 the population of Belmullet was 585 people. A Catholic chapel was built in 1832 at the cost of £300. There was a daily postal service between Ballina and Belmullet. In 1833 a courthouse was built also costing £300 which held weekly court sessions, demonstrating that the town was rapidly growing.

In the 1830s a visitor to the new town of Belmullet described it as 'the youngest town in Ireland and like all young things it is comparatively fresh and fair. The town itself contains a few thatched cabins but consists of small streets of moderately sized slated houses branching from a little square, or market place; the shops looked to be well furnished with not only necessaries but articles conducive to comfort and convenience. Buildings are going on and speculation is progressing'. He also commented that the approach to the town was 'spoiled by deformed, wretched bog huts'.[5] Two new roads were built - one to the east went to Ballycastle and one to the south to Newport. The export of meal from the area to England started. The Protestant Church was built in 1843.

In 1845 work began to re-open the canal which had been made first by Arthur Shaen. Because of the Famine, the canal was not completed until 1851. During the Relief work for the Distress (in the middle of the Great Famine) in 1846 and 1847, the footpaths were formed and flagged [6] Another development during the 1840s was the development of a fishing station to exploit the coast's natural resources. It was opened in 1847 to wash and cure fish. Boats were built there too. The station was forced to close due to local fishermen who were imprisoned for the theft of flour from a passing ship. Many people in Belmullet starved to death while soldiers guarded tons of meal, most of it lined up to be sold to England.

A workhouse was erected on the site of the current hospital. The Head of the Treasury, Charles Trevelyan, notoriously decreed that relief was only to be given to workhouse people. Starving people crowded to the workhouse. At one stage at the height of the Famine, 3,000 people were recorded as being in Belmullet workhouse.

Throughout the second half of the 19th century, many proposals were made regarding the development of a railway line in to Belmullet and the Erris region. Three routes were surveyed and discussed:

People along these routes lobbied for the railway lines to pass through their district. However the merchants of Belmullet were more sceptical, and feared that the introduction of a railway line would adversely affect their trading position, putting Ballina within easy reach of the population. Plans for a railway to Blacksod, which would have served trans-Atlantic shipping , were therefore postponed.

Many still pressed the authorities for a rail line, and this movement gained momentum during the latter days of the First World War, when it was proposed that a line would improve lines of communication between both London and Canada, and London and the USA. However, when the war ended in 1918, the hopes for a railway service to Blacksod ended with it.

Belmullet was the scene of Monster meetings of the Land League at the end of the 19th century. 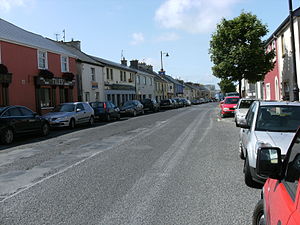 John Millington Synge author of "The Playboy of the Western World" and The Aran Islands, visited Belmullet in 1904, and reported: Belmullet in the evening is noisy and squalid, lonely and crowded at the same time and without appeal to the imagination. So at least one stays for a moment. When one has passed six times up and down hearing a gramophone in one house, a fiddle in the next, then an accordion and a fragment of a traditional lullaby, with many crying babies, pigs and donkeys and noisy girls and young men jostling in the darkness, the effect is not indistinct. All the light comes from doors or windows of shops. Last night was St. John’s Eve and bonfires were lighted all over the country, the largest of all being placed at the Town Square at Belmullet. Today, again, there was a large market in the square, where a number of country people, with their horses and donkeys, stood about bargaining for young pigs, heather brooms, homespun flannels, second hand clothing, blackening brushes, tinker’s goods and many other articles.[1]

On August 6, 1940, during the Second World War, Garda William Cullen of Belmullet station received a phone call from coastwatchers at the nearby Annagh Head lookout post. He learned that the Atlantic currents had washed ashore the body of a British soldier. From his army pay-book, Cullen identified 21-year-old Donald Domican of the 5th Battalion, the Welsh Regiment. On the evening of August 6, Domican’s body was brought to Belmullet hospital. He was buried the following day at the Church of Ireland cemetery in the town. The next day another body of a British soldier was washed up at the same site.[7]

Belmullet established a monthly cattle fair, and the town began to take trade from An Geatta Mór.[8] The Bingham family fought back but their village was more or less deserted by the cattle traders by the late 19th century.[8]

The area around Belmullet was severely impacted by the Great Irish Famine in the 19th century and in the next 100 years many people emigrated from the area to the United States and to England.

In recent years, improvement in the Irish economy has reversed population decline and Belmullet has seen some immigration. Despite many job losses in the area since the recession started in 2007, as with all over Ireland, Belmullet and the Mullet Peninsula has good natural resources in terms of fishing,[9] tourism,[10][11] wonderful location, unspoilt landscape and renewable energy resources (wind, hydro and ocean energy)[12] and related industries are all bringing continued signs of improvement for the area. 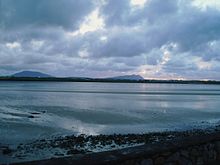 Although officially part of the Mayo Gaeltacht, it is both an English- and Irish speaking town. The area plays host in summer months to students enrolled in local Irish language summer schools.

John Millington Synge's play The Playboy of the Western World was based on his experience of the Belmullet area.[citation needed] Synge also wrote a poem entitled "Danny" about a character who was murdered by a group of local men as he was on his way back into Belmullet from Bangor Erris.

The area is popular for fishing, with both fresh-water and sea-angling off Broadhaven Bay. Watersports are also common, with surfing, windsurfing, kitesurfing and sailing.

This area of Erris was the setting for the Ulster Cycle legend of the Táin Bó Flidhais or the Mayo Táin. 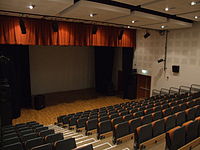 In 2007, a new arts centre, Aras Inis Gluaire, opened in the town. Its mission was to become a leading bilingual arts centre in Ireland. As well as serving as the towns library and art gallery, the centre has a state of the art theatre, which has seen many accomplished artists perform in the town, among them being Mick Flannery and Damien Dempsey.[13]