/niːˈnɑː/ or /ˈniːnə/, locally /ˈneɪnə/; Irish: Aonach Urmhumhan or alternatively An tAonach)[1] is the county town of North Tipperary in Ireland. It is the administrative centre of North Tipperary and in 2011 it had a recorded population of 7,995.[2] It is a civil parish in the historical barony of Ormond Lower. It is also an Ecclesiastical parish in the Roman Catholic Diocese of Killaloe.[3]

Nenagh was originally a market town, and its name in Irish means "The Fair of Ormond" - a reference to the Ormond (East Munster) Fair, of which it was the site. Nenagh is today a busy commercial town and is governed by Nenagh Town Council.[4]

Nenagh, the largest town in North Tipperary, lies to the west of the Nenagh River, which empties into Lough Derg at Dromineer, 9 km to the north-west, a popular centre for sailing and other water sports.[5] The Silvermine Mountain range lies to the south of the town, with the highest peak being Keeper Hill (Irish: Sliabh Ciamalta) at 694 m.[6] The Silvermines have been intermittently mined for silver and base metals for over seven hundred years. Traces of 19th century mine workings remain.[7]

Nenagh is situated on the R445 Regional Road, which links it to the M7. The M7 by-passes the town to the south and provides high quality access to the cities of Limerick and Dublin. The N52 National Secondary Route to Birr (and through the Midlands to Dundalk) starts/terminates at Nenagh. This route also bypasses Nenagh to the north and connects with the M7 to the west of the town towards Limerick.

Nenagh is connected to other main towns and cities by bus services. The main carriers are JJ Kavanagh and Sons and Bus Éireann.[8] [9]. The town centre bus stops are located at Banba Square.

Nenagh railway station is on the Limerick to Ballybrophy line. Passengers can connect at Ballybrophy halt to trains heading northeast to Dublin or southwest to Cork or Tralee. The station opened on 5 October 1863.[10]

The railway line is lightly used. Lack of upkeep means that the line is restricted to a maximum speed of 40 km/h and the existing trains are poorly timetabled for commuters. A committee (the Nenagh Rail Steering Committee) working in conjunction with Irish Railway News, had a meeting with the national railway company Iarnród Éireann (IÉ) on 1 September 2005 to present the results of a traffic study funded by Nenagh Town Council and North Tipperary County Council, and to seek a morning and evening service between Nenagh and Limerick which would increase commuter traffic. IÉ agreed to delay an afternoon service from the December 2005 timetable and to work towards an early service when equipment permitted from 2007.

While the twice-a-day service on the Ballybrophy/Limerick line is poor, Nenagh is only 37 km from Thurles, which is on the main Dublin/Cork line, and which has around 18 trains daily in each direction, including non-stop services to and from Dublin.

Nenagh is located in the Barony of Ormond Lower which was the traditional territory of the O'Kennedys prior to the Norman invasion of Ireland. This land was included in the grant made by King John of England to Theobald, eldest son of Hervey Walter of Lancashire, England. Theobald was subsequently appointed Chief Butler of Ireland.[11]

Surving east gable of the Priory and Hospital of St. John the Baptist at Tyone of the Fratres Cruciferi

Nenagh Castle was built c. 1216 and was the main castle of the Butler family before they moved to Gowran, County Kilkenny in the 14th century. The family later purchased Kilkenny Castle which was to the main seat of their power for the next 500 years.[11] The town was one of the ancient manors of the Butlers who received the grant of a fair from Henry VIII of England. They also founded the medieval priory and hospital of St John the Baptist, just outside the town at Tyone. A small settlement grew up around the castle, but it never seems to have been of any great importance other than as a local market throughout the medieval period.[12] An important Franciscan friary was founded in the town in 1252 in the reign of Henry III of England which became the head of the Irish custody of West Ireland and was one of the richest religious houses in Ireland.[11] The Abbey was in use for six hundred years; Fr. Patrick Harty, who died in 1817, was its last inhabitant.

East gable with lancet windows of the Franciscan Friary

The town seems to have been refounded in the 16th century. In 1550 the town and friary were burned by O'Carroll. In 1641 the town was captured by Owen Roe O'Neill, but shortly afterwards it was recaptured by Lord Inchiquin. It surrendered to Ireton in 1651 during the Cromwellian period and was burned by Sarsfield in 1688 during the Williamite Wars. Apart from the Castle and Friary most of the town's buildings date from the mid-18th century onwards when its sale out of Butler ownership led to the large-scale grant of leases and the subsequent growth of industries and buildings. The town's growth and development was accelerated in 1838 when the geographical county of Tipperary was divided into two ridings and Nenagh became the administrative capital of the North Riding.[11] In this period Daniel O'Connell held one of his Monster meetings for Repeal of the Act of Union at Grange outside of Nenagh.

In the 19th century Nenagh was primarily a market town providing services to the agricultural hinterland. Industries included brewing, corn processing, coach building and iron works with the addition of cottage industries such as tailoring, dressmaking, millinery, shoemaking, carpentry, wood-turning, wheelwrighting, harnessmaking, printing, and monumental sculpting. The Nenagh Co-operative Creamery was established in 1914 providing employment in milk processing and butter-making.[11]

The nine member Nenagh town council is responsible for local matters such as utilities, housing and planning.[13] At the 2009 Local Elections two members each were elected for Fianna Fáil, Fine Gael, Labour Party along with two Independents and one Sinn Féin.[14] The town is part of the seven member Nenagh ward for elections for North Tipperary County Council[15] and is part of the Tipperary North constituency.

Tonnerre in the Yonne département, France[16] 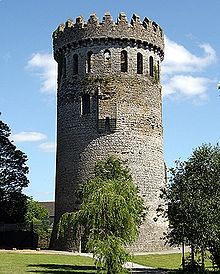 This fine Norman Keep was built c1200 by Theobald Walter, 1st Baron Butler and completed by his son Theobald le Botiller c1220.[17] The Butlers later became Earls of Ormond. Nenagh remained their principal seat until 1391 when it was moved to Kilkenny Castle. The last Marquess (James Butler) died in 1997. Without a male heir the marquessate became extinct, while the earldom is dormant. The circular keep is over thirty metres high, and has a base of sixteen metres and is one of the finest of its kind in Ireland.[17] The crown of mock crenellations and ring of clerestory windows were added at the instigation of Rev. William Flannery in 1861. The intention was that the keep would become the Bell tower of a Pugin-designed cathedral which was never built.[17] Though not true to historic character these additions have ensured the iconic status of the keep which ensures that it features on the logos of many local clubs and businesses including Nenagh Town Council.[4] A project is currently under way to develop the castle and its surrounds. This project will position the castle as the main tourist attraction in the area.

The old gaol, with its beautiful octagonal governor's residence, has been happily reduced to the status of an historic monument. Only one Gaol block remains intact. The Governor's Residence and Gaol Gatehouse currently house Nenagh & District Heritage Centre.

Nenagh Courthouse was built in 1843 to the design of Architect John B. Keane.[11] The design was similar to his previous courthouse in Tullamore which in turn followed William Morrison's designs for Carlow and Tralee.[11] The courthouse has recently been refurbished following the moving of the County Council offices to the new Civic Offices. The grounds of the refurbished courthouse nearby have recently become the site of bronze sculptures of three Olympic gold medallists with Nenagh links.

Nenagh Arts Centre (formerly the Town Hall) is a distinctive building built in 1895. It has been refurbished and now (as of October 2010) features a theatre and multi-purpose exhibition space.[18] Until 2005 it housed the offices of Nenagh Town Council and up until the 1980s Nenagh Public Library. The building was designed by the then Town Engineer Robert Gill (grandfather of Tomás Mac Giolla)[11]

St Mary's of the Rosary Catholic Church is a neo-gothic church and was built in 1895 to a design by architect Walter G Doolin.[19] It was constructed by John Sisk using Lahorna stone and Portroe slate with the Portland stone of the arches being the only imported material.[19]

The adjacent St Marys Church of Ireland Church was built in 1862 to a design by the architect Joseph Welland (1798–1860)[11] and features a stained glass window from the studio of Harry Clarke.[20] The building is striking in its simplicity in contrast to its larger and more ornate neighbour.

The town also contains the ruins of a Franciscan Friary, where the Annals of Nenagh were written and the medieval Priory of St John on the outskirts of the town at Tyone.

The New Civic Offices on the Limerick Road house both North Tipperary County Council and Nenagh Town Council. Designed by Ahrends, Burton and Koralek, they have won international recognition for their striking modern design.[21]

The Mid-Western Regional Hospital, known locally as St. Joseph's Hospital, located on the Thurles Road (c1940). It is the only general hospital in North Tipperary. Built in the International Style of mostly flat roof and rendered walls. Retro-fitted with uPVC windows at a later date. Adjoining mortuary church with notable mosaics and stained glass.[22]

Éire Óg Nenagh is the local Gaelic Athletic Association club and has had a deal of success in County Championships in both football and hurling, last winning the County Championship in 1995. The club has been strongly represented on All-Ireland winning Tipperary hurling teams with players such as Mick Burns, Michael Cleary, John Heffernan and Conor O'Donovan

After years of being one of the stronger junior Rugby clubs in Munster winning many trophies in the late nineties and early part of the new century Rugby Union club Nenagh Ormond RFC became the first Tipperary club to gain senior status by being promoted to the third division of the Rugby AIB League in 2005. Since going senior the club has competed admirably in the AIL. The club has produced three full Irish International players: Tony Courtney in the 1920s and more recently Trevor Hogan and Donnacha Ryan.[23]

The local athletic club Nenagh Olympic were named after three men (Johnny Hayes, Matt McGrath and Bob Tisdall) with Nenagh connections who won Olympic Gold Medals and the badge of the club is three interlocking Olympic Rings in green, white and orange. A statue of the three has been erected in Banba Square in the grounds of the Courthouse. The club has produced many fine athletes including recently Gary Ryan who also represented Ireland at the Olympics.[24] The club also possesses Ireland's first and to date only international standard indoor athletics track at Tyone. Many championships are held there including munster championships and even all Ireland championships[25][26]

Nenagh Golf Club located at Beechwood on the "Old Birr Road" was affiliated to the Golfing Union of Ireland in 1929. The original 9-hole course was designed by Alister McKenzie, who along with Bobby Jones designed the legendary Augusta National. The course was expanded to 18 holes by Eddie Hackett in 1973. The course was expanded to 150 acres (0.61 km2) during the 1980s and 1990s and redevelopment to a new design by Patrick Merrigan was completed in 2001.[27]