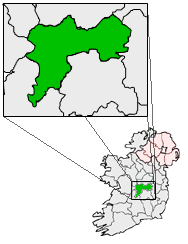 Tullamore ("Tulach Mhór" in Irish) is a town in , in the midlands of Ireland. It is Offaly's and the centre of a district the population of which totals around 15,000.

Tullamore is an important commercial and industrial centre in the region. Major international employers in the town include 'Tyco Healthcare' and 'Boston Scientific'. In 2004, [http://www.trp.ie Tullamore Retail Park] was formed. It includes outlets such as a Tesco Extra hypermarket, DID electrical, Argos Extra and Atlantic Homecare.

The town is home to the Midland Area offices of the and its Midland Regional Hospital, which together employ over 1,000 people. A new state of the art hospital is currently under a phased opening process.

Tullamore was designated a 'gateway' town in late 2003 by the , making it eligible for increased infrastructural investment. The town and its community received a bronze medal in the Government's National Tidy Towns Competition in 2004 and also played host to the 'World Sheep Dog Trials' in 2005 which attracted huge international interest in the region. The Tullamore Show is held in Charleville, Tullamore every year.

The town's most famous export is "" - an previously distilled by "" - that can be traced back to 1829. The distillery closed in the 1950s but its traces are still visible in the town. Tullamore Dew is now produced by in , , and marketed by .

Tullamore was part of the first English plantation of Offaly in the 1570s . In 1785 the town was seriously damaged when the crash of a hot air balloon resulted in a fire that burned down about 100 houses giving the town the distinction of being home to the world's first aviation disaster.

To this day, the town shield depicts a phoenix rising from the ashes.

The Grand Canal linked Tullamore to in 1798. Tullamore became of in 1835, replacing .

From 1975 until Tullamore was the home of 's principal medium-wave transmitter, broadcasting the AM version of Radio 1 on 567 kHz, at a power of 500 kW. Before this, the main transmission centre had been sited near . Tullamore is also home to the of .

The [http://www.tullamore-dew.org Tullamore Dew Heritage Centre] on the banks of the focuses on the distilling, canal and urban history of the town. Audio visual and self guided tours are available daily.

Charleville Estate located on the edge of the town, one of Ireland’s most splendid Gothic buildings, stands in beautiful parkland which contains the Charleville oak, one of the biggest and oldest in the country. The castle is said to be haunted and was featured on series 1 of Living TV's Most Haunted. The oak woodland is beautiful – and botanically an important survivor of primeval stock. Once a year the park becomes a hub of bustling and happy humanity on the occasion of Tullamore Agricultural Show, one of the most important of its kind.

Tullamore is an ideal base for discovering the to the south of the county. The 'Slieve Bloom' mountains have many beautiful walking and cycling trails as well as excellent picnic areas with some panoramic views of the surrounding lowlands.

Just south of Tullamore are the unique 'Lough Boora' parklands. The boglands are a landscape for a wide range of flora and fauna. The magnificent wetlands and wildlife wilderness of Lough Boora now host some of the most innovative land and s in Ireland. The artists, inspired by the rich natural and industrial legacy of the boglands, have created a series of large-scale sculptures that are now part of the Parklands permanent collection.

10 km west of Tullamore is the village of . The remains of a what was once a large monastery settlement founded by St.Carthage or in the 6th century, can be seen in the village.

Within 5 minutes' drive is the of . In the middle of the 6th century a monastery was founded here by St Colomba, the monastery is famous for an illuminated manuscript, written here in the 7th century, known as the .

, first opened on , [cite web | title=Tullamore station | work=Railscot - Irish Railways | url=http://www.railscot.co.uk/Ireland/Irish_railways.pdf | accessdate=2007-09-07] is served by trains on the Dublin-Galway and Dublin-Westport/Ballina inter-city routes.
*
*
* In association with the urban centres, and , Tullamore forms part of what is known as the .

This annual celebration of extreme, arts, culture and heritage was first held in August 2000. Thursday 17th to Sunday 20th July 2008. The festival celebrates Tullamore's resurrection from the ashes following a hot air balloon accident in which part of the town centre was destroyed by a wayward balloon on , - it is recognised as the world's first aviation disaster. The festival holds many events including - Hot Air Balloons, Sky Diving, Live Outdoor Concerts, Street Entertainment, Fire Parade, Fireworks and much more.

The Queen of the Land Festival

This takes place in Tullamore each year on the third weekend in November. Primarily a personality contest it seeks to find the best examples of a modern Irish woman. It is organised by Offaly Macra Na Feirme. Each year about 25 girls between the age of 17 and 35 compete to be crowned Queen of the Land. The festival provides a host of entertainment throughout the town over the weekend, primarily at night.

This annual Livestock show takes place in August. It has grown considerably over the past number of years and is now the largest one day show in the country.

The national was held in Tullamore for the very first time between the 17th and 24th August 2007.