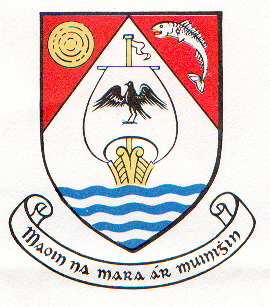 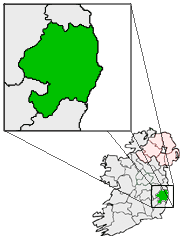 Arklow (Irish place name|An t-Inbhear Mór|Great Estuary) is a historic town located in on the east coast of Ireland. Founded by the in the ninth century, Arklow was the site of one of the bloodiest battles of the 1798 rebellion. It is now a thriving commuter town with a population of 11,759 at the 2006 census, making it the third largest town in the county. [ [http://search.gov.ie/cached/?url=http://www.cso.ie/census/census2006results/volume_2/census_2006_vol_2_tables_14_15.pdf Table 14A Persons in each town of 1,500 population and over classified by age group] Census 2006. Published by the . Retrieved on 28-03-08.]

Arklow is situated at the mouth of the , the longest river entirely within . The town is divided by the river, which is crossed by the Nineteen Arches bridge, a stone arch bridge linking the south or main part of the town with the north part, called Ferrybank.

The town's English name derives from "Arknell's Low" (Arknell was a Viking leader; a low was an area of land). Its Irish name means "the large estuary". Historically it was a major seafaring town, with both the shipping and fishing industries using the port, with shipbuilding also being a major industry. The town has a long history of industry, in particular the chemical industry.Fact|date=March 2008

After the arrival of the s, their leader Theobald Walter, ancestor of the Earls of Ormonde, was granted the town and castle of Arklow by King Henry II. In 1264 the Dominicans were granted a large tract of land, which is now known as Abbeylands, and they built an abbey, which became known as the Priory of the True Cross or Holy Cross.

Some time after 1416, the Manor of Arklow came into the control of the Kings of , possibly after the death of the 4th in 1452. In 1525, (McMurrough, King of Leinster 1522-31) returned the manor and castle of Arklow and its lands to his nephew , the Earl of Ormonde.

During the in September 1649, arrived at Arklow on his way to Wexford and took the surrender of the town. In 1714 James, , sold the Manor of Arklow to John Allen of Stillorgan, County Dublin. In 1750 Allen’s eldest granddaughter Elizabeth Allen married John Proby who was raised to the peerage in 1752 as of County Wicklow, and came into possession of the Arklow Estate.

The town of Arklow has expanded rapidly in the last decade. There has been a growth in retail in the town and a new shopping centre, the Bridgewater Centre, [ [http://www.bridgewatercentre.ie/ Bridgewater ] ] opened on , 2007 on Ferrybank, which contains Dunnes Stores, GCG Cinemas, New Look, TK Maxx, and Next amongst the main tenants. A new roundabout has been constructed at Ferrybank to allow access to Bridgewater, although congestion remains a severe problem in the town as there are just two access points from the N11, and one access point across the River Avoca.

Arklow's proximity to and its consequent attractiveness to commuters have led to much recent expansion. The town is situated near the N11 route from to Dublin, as well as having rail connections provided by along the same route, including commuter services in and out of the capital. opened on , . [cite web | title= Arklow station| work=Railscot - Irish Railways | url=http://www.railscot.co.uk/Ireland/Irish_railways.pdf | accessdate=2007-09-08]

In 1884. rented Big Rock townland from his cousin William Proby, , and commenced quarrying. Parnell was also a supporter of the Arklow harbour scheme. The Parnell quarries closed in the 1920s.

In the early part of the 20th century, a large munitions factory, , was established on the north side of the town. This factory employed several thousand workers during the First World War but closed shortly after it, all production being moved to . 17 workers were killed in an explosion at Kynoch in 1917. The town is also famous for its pottery (which eventually closed after first being taken over by ) and for its shipbuilding industry.

In the 1960s, a state-owned fertiliser factory, Nitrogen Éireann Teoranta, later Irish Fertiliser Industries, was established on the outskirts of the town. This factory complex comprised a number of chemical plants and manufactured a range of fertilisers from basic raw materials. It was one of the first major chemical plants in Ireland and contributed to the present-day success of the Irish chemical industry.Fact|date=March 2008 It closed in 2002.

There is still a good industry base in Arklow, with and still remaining, just two of the biggest manufacturers in Arklow. [cite web|url=http://www.businessworld.ie/cgi-bin/printer_friendly?a=2000551|title=Allergan Arklow to close, 360 jobs to go|accessdate=2008-02-01]

The national sail training vessel "", and "Gypsy Moth III", the yacht that sailed on the first solo transatlantic yacht race in 1960, were built in Arklow.Fact|date=March 2008 Recent times have seen large reductions in cargo and fishing, and the shipyards have closed. However the town retains its significance to shipping in Ireland as the headquarters of Arklow Shipping, which maintains a fleet of 37 cargo ships.

The River Avoca is generally held to be one of the most polluted rivers in Europe as a result of the long history of industry in the area, both from early mining operations, and more recent chemical industries. In previous centuries, Arklow was renowned for beds, however, these were destroyed over a century ago by pollutants from mining operations flowing down the river into the estuary.

A few kilometers into the is to be the site of the world's largest offshore wind farm known as the , currently made up of a test of seven 3.6 MW machines, with 106m turbines. A further 193 turbines are planned by the operating company, .

Raw from the entire town still travels through the drainage system built in the 1930s, and spews out into the River Avoca untreated via several sewage outfall pipes along the river between the bypass bridge and the Nineteen Arches bridge, on both sides of the river. The proposed was first awarded planning permission in 1993. [ [http://www.wicklow.ie/ePlan/internetenquiry/rpt_ViewApplicDetails.asp?validFileNum=1&app_num_file=93280 Wicklow County Council Planning Enquiry ] ] This was challenged unsuccessfully to An Bord Pleanála, however subsequently no funding arrived from government, [ [http://historical-debates.oireachtas.ie/S/0160/S.0160.199910190007.html Seanad Éireann - Volume 160 - 19 October, 1999 - Adjournment Matter. - Water and Sewerage Schemes ] ] and the planning permission was allowed to lapse. A further ten year planning permission was granted in 1999. [ [http://www.wicklow.ie/ePlan/internetenquiry/rpt_ViewApplicDetails.asp?validFileNum=1&app_num_file=9923 Wicklow County Council Planning Enquiry ] ] Since then it too has been challenged unsuccessfully to An Bord Pleanála. [ [http://www.rte.ie/news/2005/0125/arklow.html RTÉ News: Green light for Arklow sewerage plant ] ] The current situation is that yet another legal challenge has been mounted by the objectors to the plant. Meanwhile raw human effluence continues to flow untreated into the River Avoca. The Arklow Sea Scout group has started an online petition in favour of the proposed plant. [ [http://www.arklowseascouts.ie/seweragetreatmentpetition Guestbook ] ]

To many foreign music fans, Arklow is most known as the title setting for 's 1974 song "", one of eight songs he wrote on a three week vacation back to Ireland, and featured on his album "". The "Battle of Arklow" is a well-known hornpipe and non-traditional set dance tune, and is often played at "feiseanna" and other Irish dance competitions. Arklow is also the home town of pop group 's lead singer .