Vicksburg is the principal city of the Vicksburg Micropolitan Statistical Area, which includes all of Warren County.

The entire Choctaw Nation's location compared to the U.S. state of Mississippi.

The area which is now Vicksburg was previously part of the Natchez Native Americans' territory. The first Europeans who settled the area were French colonists, who built Fort-Saint-Pierre in 1719 on the high bluffs overlooking the Yazoo River at present-day Redwood. On 28 November 1729, the Natchez Native Americans attacked the fort and plantations in and around Natchez, killing several hundred settlers, including the Jesuit Father Paul Du Poisson, and carrying off a number of women and children. The Natchez War was a disaster for French Louisiana as the colonial population of the Natchez District never recovered. However, with the help of the Choctaw, traditional enemies of the Natchez, the French defeated and scattered the Natchez and their allies, the Yazoo.

The Choctaw Nation took over the area by right of conquest and inhabited it for several decades. Under pressure from the US government, in 1801 the Choctaw agreed to cede nearly 2,000,000 acres (8,100 km2) of land to the US under the terms of the Treaty of Fort Adams. The treaty was the first of a series that eventually led to the removal of most of the Choctaw to Indian Territory west of the Mississippi River in 1830. Nonetheless, many Choctaw remained in Mississippi, citing article XIV of the Treaty of Dancing Rabbit Creek.

In 1790 the Spanish founded a military outpost on the site, which they called Fort Nogales (nogales meaning "walnut trees"). When the Americans took possession in 1798, they changed the name to Walnut Hills. A sprawling community developed which officially incorporated in 1825 as Vicksburg. It was named after Newitt Vick, a Methodist minister. He had been a conscientious objector during the Revolution.

In 1835, during the Murrell Excitement, a mob from Vicksburg attempted to expel the gamblers from the city, because the citizens were sick of the rougher element treating the city with nothing but contempt. Five gamblers were hanged as a result. The events caused a national and international outcry against the people of Vicksburg.[1]

During the American Civil War, the city finally had to surrender during the Siege of Vicksburg, after which the Union Army gained control of the entire Mississippi River. The 47-day siege was intended to starve the city into submission. Otherwise its location atop a high bluff overlooking the Mississippi River proved impregnable to assault by federal troops. The surrender of Vicksburg by Confederate General John C. Pemberton on July 4, 1863, together with the defeat of General Robert E. Lee at Gettysburg the day before, has historically marked the turning point in the Civil War. The residents of Vicksburg did not celebrate the national holiday of 4th of July again until 1945. 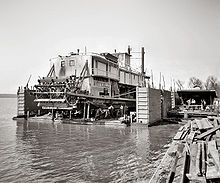 Floating drydock in Vicksburg, circa 1905

The United States Army Corps of Engineers diverted the Yazoo River in 1903 into the old, shallowing channel to rejuvenate the waterfront. Railroad access to the west was by transfer steamers and ferry barges until a combination railroad-highway bridge was built in 1929. This is the only Mississippi River rail crossing between Baton Rouge and Memphis. It is the only highway crossing between Natchez and Greenville.

Interstate 20 bridged the river after 1973. Freight rail traffic still crosses via the old bridge. North-South transportation links are by the Mississippi River and U.S. Highway 61.

On March 12, 1894, the popular soft drink Coca-Cola was bottled for the first time in Vicksburg by Joseph Biedenharn, a local confectioner. Today, surviving nineteenth-century Biedenharn soda bottles are prized by collectors of Coca-Cola memorabilia. His original candy store has been renovated as the Biedenharn Coca-Cola Museum.

Vicksburg served as the primary refugee gathering point, and relief parties put up temporary housing during the Great Mississippi Flood of 1927. It submerged a large percentage of the Mississippi Delta. That flood was the impetus towards the US Army Corps of Engineers establishing the Waterways Experiment Station as the primary hydraulics laboratory, to develop protection of important croplands and cities from the river. Now known as the Engineer Research and Development Center, it applies military engineering, information technology, environmental engineering, hydraulic engineering, and geotechnical engineering.

In the first few years after the war, the Ku Klux Klan became active but was suppressed about 1870. By the mid-1870s, new paramilitary groups had arisen in the Deep South. On December 7, 1874 in the Vicksburg Massacre, white men killed at least 50 black residents. Alternate accounts[who?] estimated that upwards of 300 blacks were killed in the city and the surrounding area. The Red Shirts, a paramilitary organization that acted as an arm of the Democratic Party, was active in Vicksburg and other Mississippi areas. President Ulysses S. Grant sent Federal troops to Vicksburg to quell the violence. In the aftermath of the Vicksburg Massacre, other states adopted what they called the Mississippi Plan. At election times, paramilitary groups' intimidated black Republican voters into staying away from the polls, thereby preventing the election of any Republicans or blacks, despite their legal right to vote. By the late 1870s, the Democrats had regained power in state legislatures across the former Confederacy.

Lynchings and other forms of vigilante violence continued to occur in Vicksburg after the turn of the century as well. In May 1903, for example, two black men charged with murdering a planter were taken from jail by a mob of 200 farmers and lynched before they went to trial.[2] 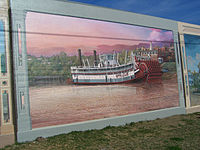 Mural of the Sprague on Vicksburg floodwall

In 2001 a group of Vicksburg residents visited the Paducah, Kentucky mural project.[3] In 2002 the Vicksburg Riverfront murals program was begun by Louisiana mural artist Robert Dafford and his team on the floodwall located on the waterfront in downtown.[4] Subjects for the murals were drawn from the history of Vicksburg and the surrounding area and include President Theodore Roosevelt's bear hunt, the SS Sultana, the Sprague, the Siege of Vicksburg, the Kings Crossing site, Willie Dixon, the Flood of 1927, the 1953 Vicksburg, Mississippi tornado outbreak, and the Vicksburg National Military Park.[5] The project was finished in 2009 with the completion of the Jitney Jungle/Glass Kitchen mural.[4] In the fall of 2010 a new 55 foot mural was painted on a section of wall on Grove Hill across the street from the original project by former Dafford muralists Benny Graeff and Herb Roe. The mural's subject is the annual "Run thru History" held in the Vicksburg National Military Park.[6][7]

The city is also home to three large Corps of Engineers installations, the Engineer Research and Development Center (ERDC), the Mississippi Valley Division headquarters, and the Vicksburg District headquarters.

The city government consists of a mayor who is elected at large. The current mayor is Paul Winfield, who defeated incumbent Mayor Leyens in the June 2009 election. There are also two aldermembers who are elected from one of two wards.

The City of Vicksburg is served by the Vicksburg-Warren School District.

A made-for-TV movie version of I Know Why the Caged Bird Sings, based on Maya Angelou's memoir, was filmed in Vicksburg. Some of the movie O Brother, Where Art Thou? was filmed here. The Stokes campaign dinner was filmed in the Southern Cultural Heritage Center's auditorium.

Vicksburg is home to the McRaven House, said to be one of the most haunted houses in America.[citation needed]

Every summer, Vicksburg plays host to the Miss Mississippi Pageant and Parade.