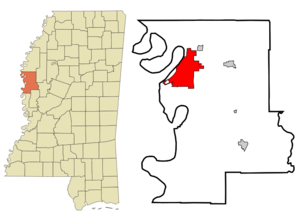 Greenville was named after hero .

Greenville is located on the eastern bank of Lake Ferguson, an oxbow lake left from an old channel of the Mississippi River. A floating casino is located on the lake near the downtown area. Chicago Mill and Lumber Co. operated a lumber mill on the lake .2 mile south of the casino levee parking lot; the mill specialized in making hardwood boxes until it closed. The Winterville Mounds Historic Site, with museum and picnic area, is located just north of the town at 2415 Highway 1 N; the Indian mounds were built by a tribe that predated the Choctaw and Chickasaw Indian tribes.

, located northeast of downtown Greenville, serves the city and the greater Greenville metropolitan region. It has commercial air service provided by Northwest Airlink to hub at Memphis.

, and the (Mississippi Highway 1) are the main transportation arteries through the Greenville area. U.S. Highway 82 is a major part of the Mississippi Delta's transportation network, as it connects to Interstate 55 and other major four-lane highways. Construction is currently underway on a new four-lane to cross the Mississippi River south of Greenville into Lake Village, Arkansas. This $206 million cable-stayed span once completed, will be the longest of its kind in the continental United States. It will replace the as the primary bridge.

Most of Greenville is served by the , while a small portion of the city lies in the .

The private schools, Washington School and [http://Gcssaints.com/ Greenville Christian School] , also serve the city; as well as the parochial schools, [http://www.stjoeirish.org/ St. Joseph High School] and [http://lourdes.greenville.ms.us/Site/Welcome.html Our Lady of Lourdes Elementary] (which are part of the [http://www.jacksondiocese.org/ Diocese of Jackson] ).

The , formerly the are an American Basketball Association franchise in Greenville.

Greenville was the birthplace of puppeteer , singer Mary Wilson of , author , pro- player Frank White, archaeologist Theresa Helbach, and pioneering . It was also the hometown of soldier and recipient .

Greenville is the home town of the Percy family, U.S. Senator , authors who took charge of the 1927 Mississippi Flood recovery effort and wrote the definitive Mississippi Delta autobiography , and who wrote .

African-American bear hunter and sportsman is buried in Greenville. Collier was the guide for President on a bear hunt and was instrumental in the birth of the legend.

(1926-2007), born Bettye Jo Crisler in Greenville, became one of the first women ministers and church administrators in the of Texas. She was first an English at in Lubbock.

The second historic marker designated by the Mississippi Blues Commission on the was placed in from of the Second Whispers Restaurant on Nelson Street in Greenville, a stop on the in the early days of the blues. The marker commemorates the importance of this site in the history of the development of the in Mississippi.