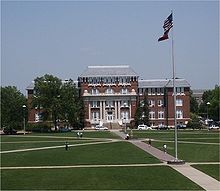 The University began as The Agricultural and Mechanical College of the State of Mississippi (or Mississippi A&M), one of the national land-grant colleges established after Congress passed the Morrill Act in 1862. It was created by the Mississippi Legislature on February 28, 1878, to fulfill the mission of offering training in "agriculture, horticulture and the mechanical arts . . . without excluding other scientific and classical studies, including military tactics." The university received its first students in the fall of 1880 in the presidency of General Stephen D. Lee.

In 1887 Congress passed the Hatch Act, which provided for the establishment of the Agricultural Experiment Station in 1888. The Cooperative Extension Service was established in 1914 by the Smith-Lever Act. The university has since had its mission expanded and redefined by the Legislature. In 1932, the Legislature renamed the university as Mississippi State College.

By 1958, when the Legislature again renamed the university as Mississippi State University, the Graduate School had been organized (1936), doctoral degree programs had begun (1951), the School of Forest Resources had been established (1954), and the College of Arts and Sciences had replaced the General Science School (1956).

The School of Accountancy was established in 1979.

The University Honors Program was founded in 1968 in order to provide more rigorous course curricula for academically talented students, as well as to facilitate guest lecture series, forums, and distinguished external scholarships. The program has been vastly expanded to form its own college after Bobby Shackouls, an MSU alumnus and retired CEO, donated US$10 million to found the Judy and Bobby Shackouls Honors College in April 2006.[6]

The school recently also started a joint Ph.D program with San Jose State University allowing an increase in research for both universities, as well as enhancing the stature of both engineering colleges.

In March 2009, Mississippi State announced the conclusion of the university's seven-year capital campaign, with more than $462 million received in private gifts and pledges. [4]

Mississippi State University is accredited by the Commission on Colleges of the Southern Association of Colleges and Schools to award baccalaureate, master's, specialist, and doctoral degrees.

Today, the university has the following colleges and schools:

As of Fall 2011, the current total enrollment of Mississippi State is 20,424.[7] The university contains 160 buildings, and the grounds of the university comprise about 4,200 acres (17 km²), including farms, pastures, and woodlands of the Experiment Station. The university also owns an additional 80,000 acres (320 km²) across the state.

Mississippi State University also operates an off-campus, degree-granting center in Meridian where both undergraduate and graduate programs are offered. In cooperation with the U.S. Army Engineer Waterways Experiment Station, the College of Engineering offers the Master of Science degree to students in Vicksburg.

Mississippi State's campus is centered on the main quadrangle, called the Drill Field (pictured) due to its heavy use by the Corps of Cadets prior to the end of World War II. The Drill Field is defined at its north and south ends by the mirror-image buildings, Lee Hall (the original University building, now the division of languages building, far left in picture below) and Swalm Hall (home to the Dave C. Swalm School of Chemical Engineering, far right in picture below). Old Main was the original dormitory, west of Lee Hall; it burned in a tragic fire, and was replaced by the Colvard Student Union. The largest building fronting the Drill Field is Mitchell Memorial Library (immediately to right of flagpole in picture below).

The Drill Field and surrounding buildings

From the Drill Field, the campus radiates in all directions. The College of Engineering can be found mostly to the east side of the Drill Field; to the north are the Arts and Sciences, including Computer Science, and the College of Architecture, Art, and Design (CAAD). Humanities are found to the south, while Agriculture dominates the west section. To the west and northwest are also found the athletic facilities, including Scott Field and the Humphrey Coliseum, or The Hump.

Beyond the main campus (and the series of commuter parking lots ringing the main campus) are the North and South Farms. While still used for their original purpose of agricultural research, the Farms are also host to newer facilities, such as the astronomical observatory and Veterinary College (South Farm) and the High Performance Computing Collaboratory (North Farm). At the far west of campus, one finds first the fraternity and sorority houses, and beyond them the Cotton District and downtown Starkville, Mississippi. The University is also home to the Thad Cochran Research, Technology and Economic Development Park, which host many of the university's research centers, such as the Center for Advanced Vehicular Systems (CAVS) and the nationally-recognized Social Science Research Center.

Old Main, originally called the Main Dormitory, was the first building on the campus of Mississippi State University. The first section of Old Main was built in 1880. Additions were constructed in 1901, 1903, 1906, and 1922. It is considered to have been the largest college dormitory in the United States. The building was completely destroyed by fire on the night of January 22, 1959. The blaze claimed the life of one of the dorm's 1,100 residents. Bricks salvaged from the fire were used to build the Chapel of Memories. Bricks from Old Main were also dumped in the area that became the band practice field and can be seen on slope of the north side.

Roy Vernon Scott, professor emeritus of history at MSU is the author of Old Main: Memories of a Legend.[8]

Prior to WMSV, Mississippi State had a student-run radio station, WMSB which went off the air permanently at the end of the spring semester of 1986. WMSB was a low-power FM station with studios on the top floor of Lee Hall. WMSB was started the Fall Semester 1971 in a freshman dorm room on the third floor of Critz Hall utilizing a FM stereo transmitter that was designed and built as a high school science fair project by one of the station's founders. The station's original call letters were RHOM. It was on air from 8:00–12:00 pm each evening. Later, funding was solicited from the Student Association. Funding was approved, the low-power RCA FM transmitter was ordered and the call letters WMSB were issued by the FCC. The station was moved to studios on the top floor of Lee Hall that were formerly occupied by a student-run AM station.

The student newspaper is the Reflector, published twice per week on Tuesday and Friday. The publication was named the #1 college newspaper in the South in 2007 by the Southeast Journalism Conference. In previous years, The Reflector has consistently ranked in the top 10 among college newspapers in the southern United States.

Mississippi State's Greek system comprises 20 fraternities and 9 sororities. Fraternities and sororities take part in a number of philanthropic programs and provide social opportunities for students. Formal rush takes place at the start of every fall semester.