Marsha Wedgeworth Blackburn[1] (born June 6, 1952) is the U.S. Representative for Tennessee's 7th congressional district, serving since 2003. She is a member of the Republican Party. The district stretches from the suburbs of Nashville to the suburbs of Memphis.

Born Marsha Wedgeworth in Laurel, Mississippi, Blackburn attended Northeast Jones High School and graduated from Mississippi State University where she joined Chi Omega,[2] and where she also spent a few summers working with the Southwestern Company. She owned and operated a marketing company in Williamson County Tennessee.

Blackburn began her political career in 1977 as a founding member of the Williamson County Young Republicans. She served as chairwoman of the Williamson County Republican Party from 1989 to 1991. Her elective political career began in 1992, when she won the Republican nomination for the 6th District, which at the time included her home in Brentwood. She lost by 16 percentage points to longtime congressman Bart Gordon. In 1995, she was appointed chairwoman of the Tennessee Film, Entertainment & Music Commission. She won elective office for the first time in 1998, when she was elected to the Tennessee State Senate, representing Williamson County and a sliver of Davidson County. She led efforts to prevent the passage of a state income tax championed by Governor Don Sundquist. 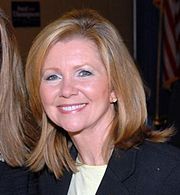 Blackburn is a fiscal and social conservative. She was defeated in November 2007 for the position of Republican Conference chairman. Some had speculated she would run for Bill Frist's U.S. Senate seat in 2006; however, she chose to run for a third House term. Unlike most female Representatives, she prefers to be called "Congressman Blackburn."[3] She was also mentioned as a possible candidate for governor in 2010.[4]

Since 2007, Blackburn has not made a special spending request in federal budget earmarks.[7]

Blackburn is a vocal opponent of President Obama's Health Care Reform Legislation, which she characterizes as "a government run, government ensured, government financed, government delivered healthcare system".[8] When pressed by MSNBC's Joe Scarborough on opponents of Health Care Reform's claim that the legislation includes "death panels" for the elderly, Blackburn equivocated and would not reject this assertion[9] although nonpartisan FactCheck.org considers it incorrect.[10]

According to her campaign website, Blackburn has received the following honors:

Blackburn served as an assistant whip in the 108th and 109th Congress, and served as a deputy whip for the 110th and 111th Congress.[11][12] During the 110th Congress she was the Communications Chairman for the Republican Study Committee. She is also serving as a member of the House Energy & Commerce Committee for third consecutive term.

Blackburn scored 100% on American Conservative Union’s 2004, 2005, 2007, 2009 Ratings of Congress.[15][16][17] According to the 2009 annual vote studies by Congressional Quarterly, Blackburn is one of the most partisan Republican members of the House.[18] According to National Journal’s 2009 Vote Ratings, she was ranked as the 7th most conservative in the House.[19] These rankings show Blackburn coming in behind a group of men who, in a six-way tie for the most conservative, all voted the same way on every politically charged issue for the year.[19] For that reason it could be argued that Blackburn's voting record is the second most conservative in the House of Representatives.

In 2008, Congresswoman Blackburn was named one of CREW's Most Corrupt Members of Congress by government watchdog group Citizens for Responsibility and Ethics in Washington.[20]

In April 2009, Blackburn questioned former Vice President Al Gore during an energy-related congressional hearing. The Independent, a London-based periodical, has credited her for "famously put[ting Gore] on the spot about his business interests in the [energy] industry" during this confrontation.[21] Citing the concerns of her district constituents, Blackburn's question to Gore was simply: "The legislation that we are discussing here today, is that something that you are going to personally benefit from?”.[22] Blackburn was taken aback when Gore vociferously refuted the implied accusation, pointing out that every penny he makes from renewable technology investment goes to a non-profit. The non-profit to which he refers is The Alliance for Climate Protection and was founded in 2006 by Al Gore.

Redistricting after the 2000 Census moved Blackburn's home from the 6th District into the 7th District. The 6th District incumbent Congressman, Democrat Bart Gordon, had faced three tough races in the 1990s (including a near-defeat in 1994) seemingly due to the 6th's inclusion of Williamson County, the wealthiest county in the state and the most Republican county in Middle Tennessee. It appears that the Democratic-controlled Tennessee General Assembly wanted to protect Gordon by moving Williamson County into the already heavily Republican 7th District.[23] To maintain approximately equal district sizes (as required by Wesberry v. Sanders – 1964) and to compensate for the increase in 7th District population by the addition of Williamson County, the General Assembly shifted some of the more Democratic parts of Clarksville to the nearby 8th District. As a result, Tennessee's 7th District is 200 miles long but only two miles wide in some parts.

Of the four serious candidates, Blackburn was the only one from the Nashville suburbs, while the other three were all from Memphis and its suburbs. The three Memphians split the vote in that area, allowing Blackburn to win the primary by 20 points. Blackburn's primary win was tantamount to election in November. In the general election, Blackburn defeated Democratic nominee Tim Barron. She was the fourth woman elected to Congress from Tennessee, but the first not to serve as a stand-in for her husband. (Irene Bailey Baker and Louise Reece had served as caretakers after their husbands died in office, and Marilyn Lloyd replaced her husband on the ballot when he died after the primary election.) She is also the first Republican to represent part of Nashville itself since Reconstruction; a small portion of Nashville (roughly coextensive with the Davidson County portion of her State Senate district) was shifted from the heavily Democratic 5th District to the 7th District after the 2000 Census.

Blackburn was unopposed for reelection in 2004, which is somewhat unusual for a freshman member of Congress, even from a district as heavily Republican as the 7th. Washingtonian's September 2004 "Best and Worst of Congress", obtained from a survey of Congressional aides, identified Blackburn as one of the three best freshman members.