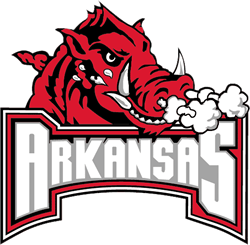 The University of Arkansas currently fields 19 total varsity teams (8 men's and 11 women's) in 13 sports. The 7 men's varsity sports includes , , cross country, football, , , track and field; the 11 women's varsity sports includes basketball, cross country, , , , indoor track, and , outdoor track, tennis, and . The Arkansas Razorbacks compete in the NCAA's (I-A in football) and is currently a member of the (Western Division).

The school's college football team is coached by , who was introduced as the new coach on December 11, 2007. [cite web |url=http://www.hogwired.com/ViewArticle.dbml?DB_OEM_ID=6100&ATCLID=1351537 |title=Bobby Petrino Named Razorback Football Coach |date=2007-12-11 |accessdate=2007-12-11] Petrino follows the ten season tenure of who resigned November 26 after a year marked by off-the-field turmoil. The team plays its home games either at , located on the University of Arkansas campus, or at War Memorial Stadium, located in . In 1964, the Razorbacks were the only team to go through the regular season and a bowl game undefeated, and they were awarded the Football Writers Association of America National Championship. The 1969 team, led by legendary quarterback Bill Montgomery, challenged the Texas Longhorns for a national championship in the Game of the Century.

The current head coach for the men's basketball team is . The former Kentucky Wildcat has coached for or played under such greats as Eddie Sutton, Billy Donovan and Rick Pitino.

The basketball team plays its home games in on the University of Arkansas campus. One of the top 10 NCAA programs of all time, the Razorbacks were ushered in to the modern era on the shoulders of Coach Eddie Sutton (800 game winner). Under the leadership of , the Razorbacks won the NCAA tournament in 1994 defeating , and appeared in the championship game the following year, but were beaten by . The Razorbacks have been to NCAA Final Four in 1941, 1945, 1978, 1990, 1994 and 1995, though the first two were achieved before the NCAA gathered the final four teams in one site.

The team, led by former Razorback reached the , joining previous appearances in Omaha in 1979 (finished runner-up); 1985; 1987 and 1989. The team plays home games in , which finished several major renovations in 2004. Baum is also currently experiencing new renovations, as new skyboxes are being added down the lines.

The most successful program in NCAA history, the Arkansas track and field teams, formerly led by head coach John McDonnell and now headed by Chris Bucknam, are the most decorated teams in the athletics department. The program has won 40 national titles in cross country and track & field as well as 84 conference titles, including 33 straight cross country titles in the Southwest and Southeastern Conferences. Former members of the team represent a number of countries internationally and have won several Olympic and World Championships medals. The team has a home indoor track at the and outdoor field at .

Arkansas was required by the NCAA to vacate the 2004 and 2005 Men's Outdoor Track championships because of infractions by a former assistant coach involving sprinter . [ [http://sports.espn.go.com/ncaa/news/story?id=3079118 ESPN - Arkansas loses two track and field titles; sprinter Gay linked to probe - College Sports ] ] . This ruling is currently under appeal.

In 2008, the men's and women's athletic departments at the University of Arkansas were merged. Though the women's teams in the past referred to as Lady'Backs, they will now be known more succinctly as "Razorbacks" like the men's programs. The women's programs include basketball, cross country, track, , , , & , , and . The Razorback women's teams teams have won a combined 17 SEC championships.

One of the main rivalries for the Arkansas Razorbacks is against the Longhorns of the University of Texas, although today the Longhorns have several other rivalries that they consider more important - notably Texas A&M and Oklahoma. Texas leads the series in football, while Arkansas holds the series lead in basketball. For Arkansas, the rivalry is an emotional experience and Arkansas fans and media go into a frenzy when the two teams play in any sport. The emotional intensity from the Arkansas side in these games overwhelms and bewilders Texas fans at times, including the 2000 Cotton Bowl, where Arkansas fans outnumbered Texas fans by almost 2 to 1 in Dallas. The Razorbacks won that game, 27-6.

Another rival from the state of is Texas A&M. During their rivalry days, the two teams played annually in all sports. In 2009, the rivalry will again resume on an annual basis, being played each year in the Dallas Cowboys' new stadium. (see )

Since joining the the Razorbacks have developed a rivalry with () in football. The game between these two teams usually takes place near the end of the season and has sometimes decided the SEC Western Division Championship. The winner of this game takes home the "Golden Boot" which is a gold trophy in the shape of the two states. Arkansas took the Golden Boot home in 2007 with a 50-48 win over the #1 ranked Tigers in Baton Rouge. This was their first time winning the trophy since 2002. Arkansas and LSU have also built a rivalry in baseball, as the two schools have been at the top of the NCAA attendance standings for the past several seasons. In 2001, despite coming into the series in last place in the SEC West, Arkansas swept a three-game series from top-ranked LSU, which won the 2000 , in Fayetteville.

In basketball, the primary rival for the Razorbacks has been the Wildcats of the . This rivalry developed during the coaching tenures of at Kentucky and at Arkansas when both teams were competing for a national championship on an annual basis. The two schools also participate in a blood drive during the week of the UA-UK basketball game, with a trophy going to the school that gives the most blood.

Inside the state of Arkansas, the University of Arkansas currently maintains a policy [http://en.wikipedia.org/wiki/Frank_Broyles#Athletic_Director] of not competing against other in-state Division I schools [http://nwanews.com/adg/Sports/169719/] There are now four other Division I schools in the state of Arkansas: in Jonesboro, , , and the 30 miles from Little Rock in Conway. Arkansas State is the only school of the three to compete in the ; UALR does not have football, while UAPB and UCA compete in the .

In 1894, 23 years after classes were first held at the university, a contest was held on campus to select school colors. Cardinal (a shade of deep red) was selected over heliotrope, a shade of moderate purple. The first Arkansas football team was formed that same year and was known as the "Arkansas Cardinals". Sometime around the year 2000, the color black began making its way onto Razorback merchandise and eventually some team uniforms. Indeed, for some time, the Collegiate Licensing Company (responsible for all UA licensed gear) touted the university's colors as red and black instead of cardinal red and white. While this has been corrected, many manufacturers of UA related merchandise still make product according to the red and black color scheme. Unfortunately, due to the constant barrage of such merchandise, a sizeable number of razorback fans believe in fact, that the official UA colors are red and black.

In 1909 the football team finished a 7-0 season allowing only 18 points on defense and scoring 186 points on offense. coach proclaimed his team played "like a wild band of hogs". The name proved so popular that it was changed for the 1910 season. The famous yell, “Woo, Pig! Sooie” was added in the 1920s.

In 1969 Broyles team was ranked #2 and played the #1 Texas Longhorns, coached by , at Fayetteville. The game, known as "The Big Shootout" is perhaps the most notable football game in Razorback history. President was even in attendance. The Razorbacks led 14-0 until the 4th quarter. Texas scored 15 unanswered points and won the National Championship 15-14.

After Broyles left coaching and became Athletic Director he hired to take his former position. Holtz served as head football coach from 1977 through the 1983 season. Under Holtz the Razorbacks lost a National Championship in the against Alabama and beat the in the Orange Bowl ending their National Championship hopes.

The basketball team rose to prominence in the 1970s under the coaching of and with future NBA star along with Marvin Delph and , three similarly-sized Arkansas bred guards, known as "The Triplets." The team made a appearance under Sutton, finishing 3rd by defeating Notre Dame on a last second shot in the now defunct consolation game.

In the 1980s the football team was coached by and established itself as a powerful running team. The Razorbacks challenged for the SWC title each year and went to the Cotton Bowl twice. Hatfield's teams established excellent regular season records, but had difficulty winning bowl games.

In 1990 Broyles led the Razorbacks out of the and into the , setting off a major realignment in . In 1995 Arkansas won its first SEC Western Division Title in football.

In 1994 's basketball Hogs won the NCAA Tournament. Richardson's basketball teams challenged for the SEC and National Championships regularly during the 1990s, making three trips to the Final Four and two trips to the championship game while compiling a record of 389-169 (.697) in his 17 years as the head coach.

On , Houston Nutt was hired as head football coach for the Razorbacks (1998 season was his first full season) to replace his predecessor, who had been head coach since 1993. Highly sought after as a Little Rock Central quarterback, Nutt had been the last recruit to sign under Broyles, but transferred to Oklahoma State once he didn't fit Holtz's offensive plans.

The track and field team has been under the direction of John McDonnell for over 25 years (since the 1977-78 academic year). McDonnell's men's teams have won 40 NCAA championships since 1984, including 11 cross country, 19 indoor track and 10 outdoor track along with 37 Championships, and 38 of 40 SEC titles. The Razorbacks, under his direction, won 5 National Triple Crowns, achieved by winning NCAA titles in cross country, indoor and outdoor track in the same school year. Arkansas and the (UTEP) are the only teams to have ever won the National Triple Crown. The track and field Razorbacks men completely dominated the sport during the 1990s, winning 24 of the 30 available titles.

There are a number of costumed mascots for the University of Arkansas Razorbacks that attend most major sporting events. Big Red (aka the "Fighting Razorback") is the traditional mascot for the University and represents the intimidating fighting spirit of the Razorbacks at all athletic events. Sue E., is the female hog and is famous for her costume changes and dancing ability. Pork Chop is the "kid" mascot. Boss Hog, a nine-foot inflatable mascot, joined the mascot family during the 1998-99 football season.

The current favored logo for the University is the classic or running hog as has been depicted on the program's football helmets for sometime. Other versions have included the infamous "popcorn hog" and various dog-bone shaped marquees.

The live mascot for the University of Arkansas is named Tusk. He is a Russian boar that closely resembles a wild razorback hog and weighs in at approximately 400 pounds. Tusk attends all home Razorback football games, as well as various other events.