Delta Gamma (ΔΓ) is one of the oldest and largest women's fraternities[1] in the United States and Canada, with its Executive Offices based in Columbus, Ohio.

Delta Gamma was founded in December 1873, in Oxford, Mississippi, at the Lewis School for Girls near the University of Mississippi. The group was founded by Mary Comfort Leonard, Eva Webb Dodd, and Anna Boyd Ellington.

The badge of Delta Gamma is a golden anchor and may be worn only by initiated members.

Before the adoption of the golden anchor, the symbol of Delta Gamma was simply an "H" for the word "hope." In 1877, the original "Hope" badge was changed to the traditional symbol of hope, the anchor. Today's badge has a small rope wrapping around the top of the anchor, with the Greek letters Tau Delta Eta (ΤΔΗ) on the crosspiece. Delta Gamma's motto is "Do Good," and its flower is the cream rose. The Hannah Doll is their mascot. 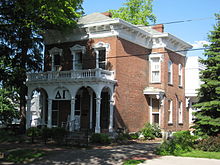 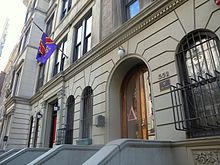 Ruth Billow, who was blinded in a childhood accident, made an impassioned plea to Convention in 1936. She asked that Delta Gamma make a difference in the lives of those with limited or no sight. Her wish was also to help society appreciate the talents of those who are visually impaired.[4] Delta Gammas give more than 96,000 Service for Sight volunteer hours each year. The most common Delta Gamma fundraisers for service for sight are Anchor Splash (a swimming event held in the spring) and Anchor Slam (a basketball event held in the spring). Many chapters participate in one of these events, with the decision being largely dependent on the climate in which the school is located.