School of Oriental and African Studies

School of Oriental and African Studies

The School of Oriental and African Studies (commonly abbreviated to "SOAS", pronounced /ˈsoʊ.æs/ soh-as or /ˈsoʊ.æz/ soh-az) is a public research university located in London, United Kingdom and a constituent college of the University of London. Specialising in laws, politics, economics (specifically development economics), humanities and languages concerning Asia, Africa and the Middle East, SOAS currently offers over 300 undergraduate Bachelor's degree combinations, and over 70 one-year intensively taught Master's degrees. MPhil and PhD degrees are also available in every academic department.

Founded in 1916, SOAS has produced several heads of state, government ministers, ambassadors, Supreme Court judges, a Nobel Peace Prize Laureate, and many other notable leaders in emerging markets, future superpowers and in the Next Eleven. Located in central London, SOAS describes itself as the "world's leading centre for the study of a highly diverse range of subjects concerned with Asia, Africa and the Middle East", and is consistently ranked amongst the top universities in the UK.[3][4]

The institution was founded in 1916 as the School of Oriental Studies at 2 Finsbury Circus, London, England, the then premises of the London Institution. The School received its Royal Charter on 5 June 1916; admitted its first batch of students on 18 January; and was formally inaugurated by King George V in the presence of the Earl Curzon of Kedleston among other cabinet officials just a month later on 23 February 1917. Africa was added to the school's name and remit in 1938 and the school permanently shifted to Thornhaugh Street, which runs between Malet Street and Russell Square.

For sometime in the mid-1930s, the School was located at Vandon House, Vandon Street, London SW1 (with the library located at Clarence House). However, its move was held up by delays in construction and the half-completed building—begun in June 1938—took a hit during the Blitz in September 1940. The School was, on Government's advice, evacuated to Cambridge and returned to London to resume work in July 1940. Most colleges of the University of London were evacuated from London in 1939 and billeted on universities all over the provinces. SOAS was transferred, but without its library, to Christ's College, Cambridge. When it became apparent that a return to London was possible, the School returned to the city and was temporarily housed for some months in 1940–41 in eleven rooms at Broadway Court, 8 Broadway, London SW1. From May 1942 SOAS' Japanese department became the centre for training military translators and intelligence officers.[5]

The institution's founding mission was primarily to train British administrators for overseas postings across the empire. Since then the school has grown into one of the world's most notable centres for the exclusive study of Asia, Africa and the Middle East. A college of the University of London, SOAS fields include Law, Social Sciences, Humanities and Languages with special reference to Asia and Africa. SOAS consistently ranks among the top twenty universities in the UK league tables and in 2004 was ranked 44th in the world, 7th in the UK and 11th overall in Europe according to The Times Higher Education Supplement.[citation needed] The SOAS Library, housed in Philips Building (designed at the beginning of the 1970s by Sir Denys Lasdun, and named after the then SOAS Director), is the UK's national resource for materials relating to Asia and Africa and is the largest of its kind in Europe.[6]

The School has grown considerably over the past thirty years, from fewer than 1,000 students in the 1970s to more than 4,500 students today, nearly half of them postgraduates. SOAS is partnered with the Institut national des langues et civilisations orientales (INALCO) of Paris. INALCO is often considered the French equivalent of SOAS.[citation needed] 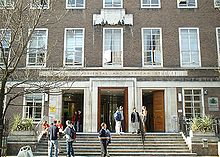 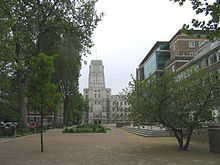 Torrington Square, with SOAS to the left, Birkbeck to the right, and Senate House in the background.

SOAS is currently split into two campuses within 20 minutes walk of each other. The Russell Square campus is located in Bloomsbury, an area at the corner of the West End known to many tourists for its shops, theatres and nightlife. The main campus was moved there in 1938, and has much expanded since then. The closest Underground station is Russell Square tube station.

The Vernon Square campus in Islington, opened in 2001, is close to King's Cross railway station and only a few hundred yards from Dinwiddy House and Paul Robeson House, exclusive to SOAS students and owned by Sanctuary Management Student Housing.

The school also houses the Brunei Gallery, built as a result of an endowment from the Sultan of Brunei Darussalam, and inaugurated by the Princess Royal, as Chancellor of the University of London, on 22 November 1995. Its facilities include exhibition space on three floors, a book shop, a lecture theatre, and conference and teaching facilities. The Gallery stages a comprehensive programme of temporary exhibitions of both historical and contemporary materials which reflect subjects and regions studied at SOAS. On 11 October 2007, the Gallery presented an exhibition drawn from the School's own collections, Objects of Instruction: Treasures of the School of Oriental and African Studies, and a rotating selection from this collection is on permanent display in the Foyle Special Collections Gallery.

The Japanese style roof garden on top of the Brunei Gallery was built during the Japan 2001 celebrations and was officially opened by the sponsor, Haruhisa Handa, an Honorary Fellow of the School, on 13 November 2001. The garden is dedicated to Forgiveness, which is the meaning of the kanji character engraved on the garden’s granite water basin. Peter Swift, a designer with experience of adapting Japanese garden design principles to the British environment and climate, conceived the garden as a place of quiet contemplation and meditation as well as a functional space complementary to the Gallery and its artistic activities.

The school also hosted the Percival David Foundation of Chinese Art, one of the foremost collections of Chinese ceramics in Europe. The collection has been loaned to and is now on permanent display in Room 95 of the British Museum. The present library building (by Sir Denys Lasdun) was added in 1973, the Brunei Gallery in 1995, and an extension to the library building opened in 2004 (the second phase of this expansion was completed in 2006). 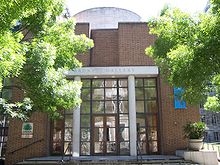 The entrance to the Brunei Gallery(at the Russell Square campus).

SOAS is world famous as a "leading centre for the study of a highly diverse range of subjects concerned with Asia, Africa and the Middle East."[7]

SOAS trains government officials on secondment from around the world in; Asian, African and Middle Eastern languages, especially in Arabic and Mandarin Chinese. It also acts as a consultant to several government departments and to companies such as Accenture and Deloitte – when they seek to gain specialist knowledge of the matters concerning Asia, Africa and the Middle East.[8]

The world-renowned SOAS library is housed in the Philips Building on the Russell Square campus and was built in 1973. It houses more than 1.5 million items and extensive electronic resources for the study of Africa, Asia and the Middle East, and attracts scholars from all over the world.[9] The library is also one of the UK's five National Research Libraries.[10] It is currently undergoing a £12 million modernisation and enlargement programme (known as 'the Library Transformation Project') that aims to increase capacity and create new student study spaces.[11] It will transform the School as it approaches its centenary in 2016 and provide a modern environment for its staff, students and users from around the world.

The Library was designed by the celebrated architect Denys Lasdun who also designed some of Britain's most famous brutalist buildings such as the National Theatre and the Institute of Education.

The SOAS Department of Linguistics was the first ever linguistics department in United Kingdom, founded in 1932 as a centre for research and study in Oriental and African languages.[12] J. R. Firth, known internationally for his original work in phonology and semantics, was Senior Lecturer, Reader and Professor of General Linguistics at the school between 1938 and 1956.

Although it is debatable whether University League Tables can accurately compare the quality of small specialised research institutions such as SOAS to general universities with tens of thousands of students and departments in nearly every academic discipline, or even to other specialised institutes with completely different kinds of focuses,[13] in 2005, SOAS placed 4th among United Kingdom universities in a Guardian poll.[14] In the subject tables of this poll, SOAS was placed 3rd for Anthropology, 4th for Economics, 3rd for History and History of Art, 6th for Law, 5th for Music, 3rd for Politics, and 3rd for Theology and Religious Studies. The History Department obtained a rare 6 research rating in the last government assessment, placing it as only one of three departments in the country to achieve such a status.[citation needed]

The Times Higher Education world rankings place SOAS 44th in the world, 7th in the United Kingdom, and 11th in Europe. SOAS is also regarded for its focus on small group teaching with a student-staff ratio of only 11:1 and some departments 6:1. SOAS currently features in the world's top 50 Universities for Arts & Humanities, according to the QS World University Rankings.[15]

2006–present Paul Webley is the current Director of SOAS. He was previously Senior Deputy Vice Chancellor and Professor of Economic Psychology at the University of Exeter.

2001–2006 Colin Bundy spent five years as Director and Principal of SOAS (and three years as Deputy Vice-Chancellor of the University of London). In 2006, he accepted appointment as Warden of Green College, Oxford.[43] 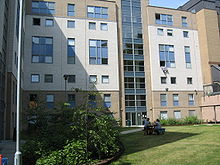 Paul Robeson House[45][46] is student housing for SOAS[47] on the Pentonville Road in London, England, and is owned by Shaftesbury Student Housing.[48] The address is 1 Penton Rise.[49] The nearest train and tube station is King's Cross.[50] The accommodation is used for international SOAS summer schools.[51]

Paul Robeson House together with James Lighthill House, another hall of residence for University College London, are on the site of a former steel-stockbroking depot, owned and operated by Macready's Metal Co. Ltd.[45] The original warehouse, built in 1935, was designed by M. Stanley Blanchfield of Raynes Park.

Paul Robeson the African American concert singer, after whom the building is named, made a significant impression at SOAS in the early 20th century. In the autumn of 1998, Paul Robeson House was opened by SOAS in his honour.[52]

Dinwiddy House is another SOAS hall of residence close to Paul Robeson House primarily inhabited by undergraduate students of the university during the academic year.[53]

Main page: :Category:Alumni of the School of Oriental and African Studies

SOAS has many notable alumni in positions of authority around the world, reflecting its status and its international remit. They include: 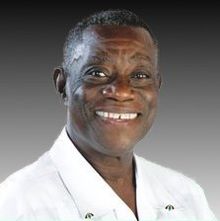 John Atta Mills, who has been the President of Ghana since 2009. 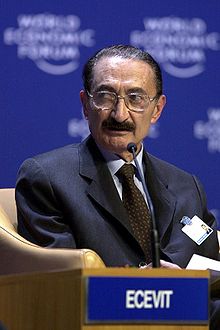 Bülent Ecevit, who was Prime Minister of Turkey four times between 1974 and 2002. 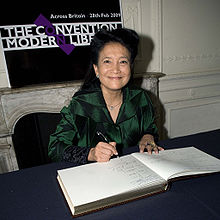 The Chinese-born British writer Jung Chang, who is best known for her family autobiography Wild Swans.

Music and the arts 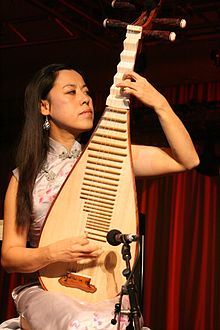 See also: Category:Academics of the School of Oriental and African Studies

Faculty of Law and Social Sciences

Faculty of Arts and Humanities

Faculty of Languages and Cultures