Hassanal Bolkiah
Not to be confused with the fifth Sultan of Brunei Bolkiah. 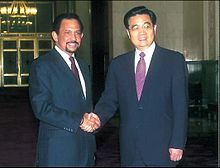 Under Brunei's 1959 constitution, the Sultan is the head of state with full executive authority, including emergency powers since 1962. On 9 March 2006, the Sultan was reported to have changed Brunei's constitution to make himself infallible under Bruneian law.[1] Bolkiah is also the Prime Minister as well as holding the portfolios of Minister of Defence and Finance.

He addressed the United Nations General Assembly on Brunei Darussalam's admission to the United Nations in September, 1984. In 1991, he introduced a conservative ideology to Brunei called Melayu Islam Beraja (MIB) (or Malay Islamic Monarchy), which presents the monarchy as the defender of the faith.[2] He has recently favoured Brunei government democratisation and declared himself Prime Minister and President. In 2004, the Legislative Council, which had been dissolved since 1962, was reopened.[3]

His designated successor is his eldest son, Al-Muhtadee Billah.

He was born on 15 July 1946 in Brunei Town (now called Bandar Seri Begawan). He became crown prince in 1961 and sultan on 5 October 1967, after his father abdicated voluntarily. His coronation was held on 1 August 1968. Like his father, he has been knighted by Queen Elizabeth II of the United Kingdom, of which Brunei was a protectorate until 1984.

The Sultan received high school education in Malaysia's premier school Victoria Institution in Kuala Lumpur, where he joined the Cadet Corps (band). After receiving a private education in Brunei, the Sultan attended the Royal Military Academy Sandhurst in October 1967 but returned home to be the Crown Prince few months before graduation.

Despite his personal extravagance, he has attempted to share the country's oil wealth. In Brunei, mockingly dubbed the "Shellfare State", a reference to the significant influence of the Shell Oil Company,[4][5] Bruneians have free education and medical services. There are no personal income taxes in Brunei.

His official residence is the Istana Nurul Iman, with 1,888 rooms, 290 bathrooms, and a floor area of 2,152,782 sq ft (200,000 m²), controversially claims to be “world’s largest working palace”. The Istana is an official residence with offices housing the Offices of the Sultan and Yang Di-Pertuan, Grand Chamberlain's office, many istana departments like protocol, istana household and finance departments and offices of the Prime Minister's Department. Parts of the Ministry of Defence and Ministry of Finance are also located at the palace, as the Sultan is the Prime Minister, Minister of Defence and Minister of Finance. The Crown Prince, who is the Senior Minister, also works from offices at the Istana. Hyatt Borneo Management Services and HM The Sultan's flight also maintain offices there.

The Sultan currently has one wife, with Raja Isteri Pengiran Anak Saleha being designated his first wife. His former second wife, Pengiran Isteri Hajah Mariam, was a former stewardess for the national carrier, Royal Brunei Airlines (RBA) whom he divorced in 2003, stripping her of all her royal titles. In August 2005 her place was taken by a former Malaysian TV3 presenter, Azrinaz Mazhar Hakim, who is 33 years younger than the Sultan. They divorced in 2010.[6]

Prince Al-Muhtadee Billah is the crown prince and the Sultan's heir, the eldest son of the Sultan and Raja Isteri Pengiran Anak Saleha, his first wife. As of 2008, Hassanal Bolkiah has five sons and seven daughters with his three wives.[7]

Between 2001 and 2005 a UK businessman, Mark Burby, was defrauded by two members of the Brunei royal family, Pengiran Ayub (the Sultan's cousin) and Pengiran Damit (the Sultan's sister-in-law).[8] The case went to trial, and the Brunei Royals were ordered to pay over £50M of lost earning to Burby.[8] After the judgement, Burby went to work for a more-senior Brunei Royal on the understanding that the Sultan would ensure that the debt was paid. As of July 2009[update], the debt remains unpaid.[8]

In 1997, former Miss USA Shannon Marketic filed a lawsuit against the ruling family of Brunei for $90 million.[9] In the case, Marketic alleged that she and 6 other young women were paid $127,200 each for a modeling job in Brunei (whereas on the ABC news program 20/20, Marketic said she was supposed to provide "intellectual conversations" with visiting guests of the royal family). These other women include former Miss Teen USA and future Miss USA Brandi Sherwood, who was invited along by Shannon, and Miss United Kingdom runner up Paula Bradbury.

Marketic maintained that she and Stephanie Granton were held as "sex slaves" at the Sultan's palace and were "intimidated and coerced into performing physically and morally repulsive acts of prostitution."[10] They were allegedly expected to dance at nightly parties during which they were groped and grabbed by men, one of whom was the Sultan's son, Prince Azim. During the dances Marketic was also allegedly abused verbally with comments made about her bare breasts.[11] The women were often told to go with a man to have "tea" with him, and then had sex with him.[12] In her interview on 20/20, Marketic said that after 32 days, she had a letter sent to the US Embassy; shortly afterwards, she was paid $10,000 by the ruling family and flown back to the United States.[9] The case was thrown out due to the immunity of the ruling family as heads of state.[12] There has been no further investigation into this case although there are allegations both supporting and refuting her claims. Paula Bradbury separately sued the Sultan and won £500,000 in settlement.[13]

The Sultan received an honorary doctorate from a Russian university.[15]

On 14 April 2011, he was conferred the Honorary Doctorate of Law by King's College London.[18] The scroll for the honorary doctorate was presented by Lord Duoro, the chairman of the Council of King's College London. He was awarded with an honorary doctorate in philoposhy and humanities on 21 April 2011 from Universitas Indonesia, one of the oldest universities in Asia having been established 160 years ago.[19]

In April 2008, he was made an honorary member of the Indonesian Satgas Atbara Special Operations Unit.

He holds the rank of Honorary Colonel of Pakistan's Special Service Group (SSG), awarded to him during his visit to the Pakistan Army's SSG headquarters at Cherat.[22]

He possesses red beret and paratrooper wings of the Black Hawk paratroopers, presented to him by the Indian Army during his state visit to India.