Shell Oil Company
This article is about the U.S. oil company. For the multinational parent company, see Royal Dutch Shell. 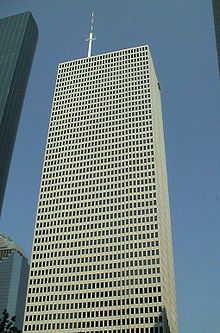 Shell Oil Company is the United States-based subsidiary of Royal Dutch Shell, a multinational oil company ("oil major") of Anglo Dutch origins, which is amongst the largest oil companies in the world. Approximately 22,000 Shell employees are based in the U.S. The head office in the U.S. is in Houston, Texas. Shell Oil Company, including its consolidated companies and its share in equity companies, is one of America’s largest oil and natural gas producers, natural gas marketers, gasoline marketers and petrochemical manufacturers.

Shell is the market leader through approximately 25,000 Shell-branded gas stations in the US which also serve as Shell's most visible public presence. Shell Oil Company is a 50/50 partner with the Saudi Arabian government-owned oil company Saudi Aramco in Motiva Enterprises, a refining and marketing joint venture which owns and operates three oil refineries on the Gulf Coast of the United States. It also holds 80% of an exploration firm called Pecten that explores and drills in various offshore locations including the oil basin near Douala, Cameroon in cooperation with the French government-owned Elf Aquitaine (now Total).[1]

Shell products include oils, fuels, and card services as well as exploration, production, and refining of petroleum products.[2] The Shell Oil Refinery in Martinez, California, the first Shell refinery in the United States,[3] supplies Shell and Texaco stations in the West and Midwest.[4]

Shell gasolines used to include the RU2000 and SU2000 lines (later there was a SU2000E) but they have been superseded by the V-Power line.[5]

In 1997 Shell and Texaco entered into two refining/marketing joint ventures. One combined their midwestern and western operations and was known as Equilon. The other, known as Motiva, combined the eastern and gulf coast operations of Shell Oil and Star Enterprise, itself a joint venture between Saudi Aramco and Texaco.[6] After Texaco merged with Chevron in 2001, Shell purchased Texaco's shares in the joint ventures.[7] In 2002, Shell began converting these Texaco stations to the Shell brand, a process that was to be completed by June 2004, "the largest retail re-branding initiative in American business history."[8]

Until the mid 1980s Shell’s business in the United States was substantially independent, with its stock (“Shell Oil”) being traded on the NYSE and with little direct involvement from the Group’s central office in The Hague, in the running of the American business. In 1984, Shell made a bid to purchase those shares of Shell Oil Company it did not own (around 30%) and despite some opposition from some minority shareholders which led to a court case, Shell succeeded in the buy-out for a sum of $5.7 billion.[9] 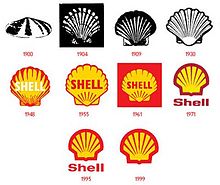 Despite the acquisition, however, Shell Oil remained a very independent business. This was partly for complex legal reasons as RoyalDutch/Shell feared that there could be onerous liability problems if a closer control of Shell Oil's affairs was taken by the "parent companies". One of the stranger consequences of this independence was that the Shell logo used in the US was slightly different from that used in the rest of the world. In the 1990s Shell Oil's independence began gradually to be eroded as the "parent companies" took a more hands-on approach in the running of the business. The logo used in the United States is the same as that used elsewhere since June 1, 1998.[10] 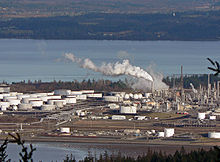 The U.S. Environmental Protection Agency (EPA) issued a Notice of Violation to Shell Oil Company for its infringements of the Clean Air Act at a bulk petroleum terminal the company owned in Bridgeport, Conn., until October 1, 1998. According to the report, Shell loaded a total of 28.4 million gallons of gasoline onto barges without required vapor recovery equipment on seven days in 1997 resulting in 56 tons of uncontrolled volatile organic compound emissions. During the investigation, the EPA found that Shell built an additional loading bay without permit of the state Department of Environmental Protection in 1995. Bridgeport’s facility had been recorded to produce average of about 170 tons of volatile organic compounds per year.[11] However, this modification has the potential of production 30 tons per year more of the pollution emissions.[12]

In 2008, a lawsuit was filed against Shell Oil Company for alleged Clean Air Act violation. Shell Deer Park facility, 20 miles east of Houston, was the nation’s eighth-largest oil refinery and one of the world’s largest petrochemical producers. The facility was also the second largest source of air pollution in Harris County, which ranked among the lowest in the nation in several measures of air quality.[News 1] According to Sierra Club and Environment Texas, analysis of Shell’s reports to the Texas Commission on Environmental Quality, air pollutants released at Deer Park since 2003 exceeded the EPA's emissions limits.[15]

Shell has recently implemented efforts to reduce the impact of its operations on the millions of migratory birds that encounter the North Sea drilling operations.[citation needed]

Mehdi Shahbazi was a Shell station operator in central California who posted signs in 2005 stating "Big oil's unearned profit" in protest of zone pricing. Shell sued Shahbazi saying that the protest violated the terms of his lease.[16] Shahbazi responded by accusing the company of "breach of contract and of violating the Petroleum Marketing Practices Act". Shell then terminated his contract.[citation needed] A federal judge ruled in favor of Shell and Shahbazi was ordered to vacate the station.

From 1978 to 1995, Shell Oil produced pipes made out of polybutylene, which corrodes when exposed to chlorine. A class action lawsuit was filed in 1995 against Shell Oil when the polybutylene pipes caused flooding in many households.[citation needed] This lawsuit required Shell Oil to pay for the re-installation of piping for millions of houses until its expiration in May 2009.[citation needed]

Author Ken Saro-Wiwa was a member of the Ogoni people, an ethnic Nigerian minority whose hometown, Ogoniland, in the Niger Delta has been targeted for crude oil extraction since the 1950s and which has suffered extreme and unremediated environmental damage from decades of indiscriminate oil waste dumping. Saro-Wiwa, initially as spokesperson, and then as President, of the Movement for the Survival of the Ogoni People (MOSOP), led a nonviolent campaign against environmental degradation of the land and natural waters of Ogoniland by the operations of multinational oil companies, especially Shell.[citation needed]

At the peak of his non-violent campaign, Saro-Wiwa and the other members of the Movement for the Survival of the Ogoni People were arrested, hastily tried by a special military tribunal, and hanged in 1995 by the Nigerian military government of General Sani Abacha, all on charges widely viewed as entirely politically motivated and completely unfounded. Their executions provoked international outrage and resulted in Nigeria's suspension from the Commonwealth of Nations.

Shell has been brought on trial in New York with the accusation of having collaborated with the military executions, and in June 2009, it has settled out of court for US$15 million to bring the case to an end. Ben Amunwa, director of the Remember Saro-Wiwa organization, said that "No company, that is innocent of any involvement with the Nigeria military and human rights abuses, would settle out of court for 15.5 million dollars. It clearly shows that they have something to hide".[18]