Prior to the Vice Presidency, Barkley served in the U. S. Senate from Kentucky for over twenty years, and was Majority Leader of that body from 1937 to 1947. 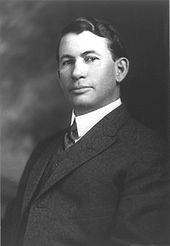 Barkley was born Willie Alben Barkley in a log cabin near Lowes, Graves County, Kentucky. His parents, John Wilson Barkley and Electra Eliza (Smith) Barkley, were deeply religious tenant farmers. He graduated from Marvin College in 1897, where he excelled in speech and debate. He worked his way through college with a full-time janitorial job. Barkley later attended Emory College, in Oxford, Georgia. He was a member of Delta Tau Delta social fraternity, graduated in 1900, and then attended the University of Virginia School of Law. It was during this time that he legally changed his name from "Willie Alben" to "Alben William."

Barkley was admitted to the Kentucky bar in 1901 and commenced practice in Paducah, Kentucky. He was the prosecuting attorney for McCracken County from 1905 to 1909 and judge of McCracken County Court from 1909 to 1913. He built a reputation as a progressive who sided with the farmers more than the townspeople. His energetic, folksy campaigning and strong oratorical skills made him a power in the local Democratic party. He defeated three opponents in the 1912 congressional primary, won the Congressional election, and became a member of the U.S. House of Representatives.

According to Alben Barkley's memoir, That Reminds Me, he was married to Dorothy Brower in 1903. They had three children, David (Bud), "Sis" (Marian) and "Wahwee" (Laura Louise, who married a nephew of General Douglas McArthur). In later years, Dorothy suffered from a heart condition, and Alben Barkley donated money to the University of Louisville School of Medicine, to find treatment for heart disease.

She died in 1947, and her daughter Sis (Mrs. Max O'Rell Truitt) took over hostessing duties until Alben Barkley remarried, during his term as Vice President. 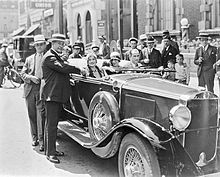 Barkley campaigning in Lexington, Kentucky, circa 1930

Barkley was elected to the Sixty-third and to the six succeeding Congresses (1913–1927) representing Kentucky's 1st district in the U.S. House of Representatives. As a member of the House Barkley helped foster the Prohibition Amendment and the Volstead Act.[1]

He gained statewide stature by leading a crusade against the coal and gambling special interests during his 1923 campaign for Governor of Kentucky. Barkley narrowly lost the Democratic gubernatorial nomination. However, that sole electoral defeat actually helped propel him into the U.S. Senate in 1926. The race gave him name recognition throughout Kentucky and won him the title "Iron Man," for his ability to give as many as sixteen speeches a day on the campaign trail.

Button from Barkley's 1944 campaign for Senate

Barkley was the keynote speaker at the 1932 Chicago National Democratic Convention which chose Franklin Roosevelt as its party nominee for President. Barkley also served as keynoter at the 1936 and 1948 Democratic National Conventions in Philadelphia. In December 1933, he became vice chairman of the Democratic Conference and assistant to Senate majority leader Joseph T. Robinson. He and Robinson worked to pass New Deal legislation, such as the Securities and Exchange Act, National Labor Relations (Wagner) Act, and the Social Security Act, through the Senate in 1934–1936. After Robinson's death during the court-packing controversy of 1937, Barkley narrowly defeated Pat Harrison of Mississippi in a 38–37 vote to become the new majority leader. He was aided by the vocal support of Franklin D. Roosevelt and the President's "Dear Alben" letter submitted to the Washington press corps, which highlighted Roosevelt's desire for Barkley to become majority leader. Barkley's most critical election came in the 1938 primary when he defended the New Deal against conservative Governor Albert B. "Happy" Chandler. After a bitter race in which Barkley's diligent campaigning was bolstered by Roosevelt's strong endorsement, Barkley handily defeated the sitting Governor, receiving 56% of the vote.

When the Senate majority leader’s job opened up in 1937, Barkley went after it. Nose counts put him in a tie with Mississippi's Pat Harrison. Harrison’s campaign manager asked Theodore G. Bilbo, the other member from Mississippi, to consider voting for his fellow Mississippian. Bilbo, a race-baiting demagogue whose base was among tenant farmers, hated the upper-class Harrison, who represented the rich planters and merchants. Bilbo said he would vote for Harrison only if he were personally asked. Harrison replied, “Tell the son of a bitch I wouldn’t speak to him even if it meant the presidency of the United States.” When the ballots were in, Barkley won by one vote, 38-to-37, and Harrison's reputation as the senator who wouldn’t speak to his home-state colleague remained intact.

Barkley served as Senate majority leader from 1937 to 1947 and Senate Minority Leader from 1947 to 1949. He shepherded Roosevelt's domestic and war proposals through the Senate, sponsoring financing for World War II and the lend-lease bill, which prevented Great Britain from capitulating to the Nazis. However, he broke with Roosevelt in 1944 on tax issues. When Roosevelt vetoed a tax bill because the rates were too low, Barkley resigned his leadership position, and called for a veto override. The veto was overridden and Barkley was unanimously returned as Majority Leader, clearly demonstrating that he, not the President, controlled the Senate. 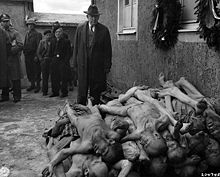 Senator Barkley, a member of the US Congressional Nazi crimes committee visiting Buchenwald concentration camp shortly after its liberation.

During the 1944 Democratic convention, Barkley was passed over for the Vice Presidential nod in favor of Senator Harry S. Truman of Missouri. In spite of any prejudice, Barkley unwaveringly supported the Roosevelt/Truman ticket and continued his legislative service. Barkley worked extensively with Truman after Truman became President upon the death of Roosevelt in April 1945. During this time, Barkley continued to play an influential role in the Senate, helping to ensure passage of the United Nations Charter through that body. He also served as chairman of the Joint Committee on the Investigation of the Pearl Harbor Attack and member of the Congressional Nazi War Crimes committee. His experiences in post-war Germany, his religious conviction, and his relationship with fellow Kentuckian and U.S. Supreme Court Justice, Louis D. Brandeis, led him to later support the formation of Israel as a recognized nation-state.

Barkley's first wife, Dorothy Brower Barkley, died of a long illness in 1947. In spite of such personal hardships, Barkley's public persona soared. He was ranked as the most popular Democrat, and vied with General Dwight D. Eisenhower as Look magazine's most "fascinating" American.

Barkley lived in this apartment building in Washington

Barkley was nominated for Vice President at the 1948 Democratic National Convention in Philadelphia following a rousing keynote address that garnered some support for his nomination as President. President Truman was widely considered an unpopular candidate for re-election against Governor Thomas Dewey of New York.

Despite their underdog status, Truman and Barkley continued to campaign doggedly. Barkley coined the term "Give 'em hell, Harry" as Truman was leaving Washington on his "whistle-stop" train across the country. Barkley's "prop-stops" by airplane also initiated a new phase in presidential campaigning by air.

Barkley was 71 years old at the time of his inauguration on January 20, 1949, the oldest Vice President to date.

In many ways, Barkley was the last of the old-time vice presidents, the last to preside regularly over the Senate, the last not to have an office in or near the White House, the last to identify more with the legislative than the executive branch. However, Barkley was a new kind of vice president in other respects. Barkley was the only Vice President to marry while in office. At the age of 71, he married Jane Hadley Barkley, a widow from St. Louis, capturing national attention. Mrs. Hadley was 34 years his junior, age 37 at the time of their marriage. Because of his legislative experience, Truman insisted on his being the first Vice President to be included in all cabinet-level meetings. He was the first Vice President to become a member of the National Security Council, as mandated by the National Security Act of 1947. Truman declared that Vice President Barkley, because of his extensive legislative experience, "was in a class by himself. He had the complete confidence of both the President and the Senate."[2] By executive order and with the counsel of Barkley, President Truman proclaimed a new coat of arms, seal, and flag for the Office of Vice President.

Barkley was popularly known as "the Veep". His young grandson, Stephen M. Truitt, had suggested this abbreviated alternative to the cumbersome "Mr. Vice President." When Barkley told the story at a press conference, the newspapers printed it, and the title stuck. Barkley's successor as Vice President, Richard Nixon, declined to continue the nickname, saying that it had been bestowed on Barkley affectionately and belonged to him. However, the term has continued to be used as shorthand for Vice President.

In 1949, he returned to his alma mater, Emory University, to receive an LL.D. degree and deliver the commencement address, an occasion which became the first Emory event ever televised. Later that year, he received the Congressional Gold Medal. In 1950, Barkley granted the right to the Emory University debate team to rename itself the Barkley Forum.

Truman gave up his reelection campaign in 1952 after losing the New Hampshire primary. Barkley announced his bid on July 6. On July 20 the A.F.L and C.I.O announced they would not support his candidacy. The ranking A.F.L. official among the delegates to the Democratic convention, George M. Harrison, said "we can't sell Barkley to labor, not because of his record, but his age."[3] Barkley was 74 at the time. Two days later, Barkley withdrew from consideration.[4]

This is in marked contrast to later Vice Presidents, the majority of whom later campaigned for the presidency. (The exceptions are Spiro Agnew, Nelson Rockefeller and Dick Cheney). Barkley's own withdrawal created a wide open race. Ultimately, the nominees were Adlai E. Stevenson II and former General Dwight Eisenhower, with Eisenhower winning the 1952 Presidential election.

Return to the Senate and final speech

After retiring, Barkley hosted a national political television show ("Meet the Veep" on NBC), had numerous speaking engagements, and began writing his memoirs. He decided to again run for the U.S. Senate in 1954, to help Lyndon Johnson secure a Democratic majority in that body and become Majority Leader. Barkley easily defeated Republican incumbent John Sherman Cooper.

As the junior Senator from Kentucky, Barkley sat on the back row away from his traditional spot in the front row while majority leader. He served in the Senate from 1955 until his death the following year of a heart attack while giving a speech at the 1956 Mock Convention held at Washington and Lee University in Lexington, Virginia. He died moments after declaring, "I'm glad to sit on the back row, for I would rather be a servant in the House of the Lord than to sit in the seats of the mighty." Barkley's body lay in state in Washington, D.C. He was interred in Mount Kenton Cemetery, on Lone Oak Road, near Paducah, Kentucky.

In his honor, the award-winning debating society at Emory University was renamed the Barkley Forum in 1950. The Alben W. Barkley Distinguished Chair was also created in the Department of Political Science at Emory University, which is held by Alan I. Abramowitz, a notable American politics and elections scholar. Lake Barkley, a man-made lake on the Cumberland River at the Kentucky-Tennessee border, and Barkley Dam at the same lake, are also named in his honor.

In 1953, 26 oral history interviews were conducted with Alben Barkley and are available at the University of Kentucky's Louie B. Nunn Center for Oral History.[5]