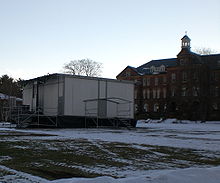 Saint Anselm College Quad with the "Fox-Box", where the Fox News network reported live during the 2004 and 2008 New Hampshire primary.

The New Hampshire primary is the first in a series of nationwide political party primary elections held in the United States every four years (although the Iowa caucus is held earlier), as part of the process of choosing the Democratic and Republican nominees for the presidential elections to be held the subsequent November.

Although only a few delegates are chosen in the New Hampshire primary, its real importance comes from the massive media coverage it receives (along with Iowa, which holds the first caucuses); in recent years the two states received about as much media attention as all other state primaries combined[citation needed]. An example of this massive media coverage has been seen on the campus of Saint Anselm College, as the campus has held multiple national debates and have attracted media outlets like Fox News, CNN, NBC, and ABC. The publicity and momentum can be enormous from a decisive win by a frontrunner, or better-than-expected result in the New Hampshire primary. The upset or weak showing by a front-runner changes the calculus of national politics in a matter of hours, as happened in 1952 (D), 1968 (D), 1980 (R), and 2008 (D).

Since 1952, the primary has been a major testing ground for candidates for both the Republican and Democratic nominations. Candidates who do poorly frequently drop out, while lesser-known, underfunded candidates who do well in New Hampshire suddenly become serious contenders, garnering large amounts of media attention and campaign funding.

New Hampshire's first-in-the-nation primary status was threatened in 2007, when both the Republican and Democratic National Committees moved to give more populous states a bigger influence in the presidential race.[2]

There is consensus among scholars and pundits that the New Hampshire primary, because of the timing and the vast media attention, can have a great impact and may even make or break or revive a candidate.[4] Controlling for other factors statistically, a win in New Hampshire increases a candidate's share of the final primary count in all states by 27 percentage points.[5]

Since then, the primary has been considered an early measurement of the national attitude toward the candidates for nomination. Unlike a caucus, the primary measures the number of votes each candidate received directly, rather than through precinct delegates. The popular vote gives lesser-known candidates a chance to demonstrate their appeal to the electorate at large.

Unlike most other states, New Hampshire permits voters that have not declared their party affiliation to vote in a party's primary. A voter does have to officially join one party or the other before voting; however the voter can change his or her affiliation back to "Undeclared" immediately after voting, and hence he or she only has to belong to a party for the few minutes it takes to fill out and cast a ballot. Voters who are already a member of one party or the other cannot change their affiliation at the polling place: that can only be done before the checklist is closed several weeks prior to the election. New voters can, however, register at the polling place.[1] All voting is done with paper ballots; however, most of the paper ballots are counted by machine.

New Hampshire's status as the first in the nation is somewhat controversial among Democrats because the ethnic makeup of the state is not diverse and not representative of the country's voters.[8] This is shown in the 2000 Census data, with the ratio of minority residents being six times smaller than the national average (New Hampshire is 96% non-Hispanic white, versus 75% nationally). Politically however, the state does offer a wide sampling of different types of voters. Although it is a New England state, it is not as liberal as some of its neighbors. For example, according to one exit poll, of those who participated in the 2004 Democratic Primary, 4-in-10 voters were independents, and just over 50% said they considered themselves "liberal." Additionally, as of 2002, 25.6% of New Hampshire residents are registered Democrats and 36.7% are Republicans, with 37.7% of New Hampshire voters registered as "undeclared" independents. Also, New Hampshire was the only state in the Northeast to vote for George W. Bush in 2000. This plurality of independents is a major reason why New Hampshire is considered a swing state in general U.S. presidential elections.

Recently, media expectations for the New Hampshire primary have come to be almost as important as the results themselves; meeting or beating expectations can provide a candidate with national attention, often leading to an infusion of donations to a campaign that has spent most of its reserves. For example, in 1992, Bill Clinton, although he did not win, did surprisingly well, with his team dubbing him the "Comeback Kid"; the extra media attention helped his campaign's visibility in later primaries.[9]

New Hampshire's political importance as the first in the nation primary state is highlighted in the documentary film Winning New Hampshire. The film focuses on John Kerry's comeback in 2004 and the decisive effect of the New Hampshire Primary on the Presidential selection process.

New Hampshire has held a presidential primary since 1916, but it did not begin to assume its current importance until 1952 after NH simplified its ballot access laws in 1949 seeking to boost voter turnout, when Dwight Eisenhower demonstrated his broad voter appeal by defeating Robert A. Taft, "Mr. Republican," who had been favored for the nomination, and Estes Kefauver defeated incumbent President Harry S. Truman, leading Truman to abandon his campaign for a second term of his own.

The other President to be forced from running for re-election by New Hampshire voters was Lyndon Johnson, who, as a write-in candidate, managed only a 49-42 percent victory over Eugene McCarthy in 1968 (and won fewer delegates than McCarthy), and consequently withdrew from the race.[10]

The 1968 New Hampshire Democratic Primary was one of the crucial events in the politics of that landmark year in United States history. Senator Eugene McCarthy began his campaign with a poem that he wrote in imitation of the poet Robert Lowell, "Are you running with me Jesus":

I'm not matching my stride
With Billy Graham's by the Clyde
I'm not going for distance
With the Senator's persistence
I'm not trying to win a race
even at George Romney's pace.
I'm an existential runner,
Indifferent to space
I'm running here in place ...
Are you with me Jesus? [11]

In November 1967, McCarthy declared, "there comes a time when an honorable man simply has to raise the flag" to gauge the country's response and conduct a candidacy for the presidency of the United States by entering the New Hampshire Democratic primary.

On March 12, 1968, McCarthy came within 7 percentage points of defeating President Lyndon Johnson in New Hampshire. Johnson subsequently withdrew from the election with this Shermanesque statement: "I shall not seek, and will not accept, the nomination of my party for another term as your president."

Notes: Winner is listed first. Candidates in bold went on to win their party's nomination.

The only time a non-incumbent won the Vice Presidential primary and then went on to be formally nominated by his or her party was in 2004, when Democratic U.S. Senator John Edwards won as a write-in candidate. (Edwards, who was running for President at the time, did not actively solicit Vice Presidential votes.)

The following candidates received the greatest number of votes at each election.