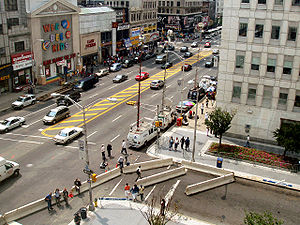 Electronic News Gathering trucks and photojournalists gathered outside the Prudential Financial headquarters in Newark, United States in August 2004 following the announcement of evidence of a terrorist threat to it and to buildings in New York City.

The news media are those elements of the mass media that focus on delivering news to the general public or a target public. These include print media (newspapers, newsmagazines), broadcast news (radio and television), and more recently the Internet (online newspapers, news blogs, etc.).

A medium (plural media) is a carrier of something. Common things carried by media include information, art, or physical objects. A medium may provide transmission or storage of information or both. The industries which produce news and entertainment content for the mass media are often called "the media" (in much the same way the newspaper industry is called "the press"). In the late 20th century it became commonplace for this usage to be construed as singular ("The media is...") rather than as the traditional plural.

Broadcasting is the distribution of audio and video signals (programs) to a number of recipients ("listeners" or "viewers") that belong to a large group. This group may be the public in general, or a relatively large audience within the public. Thus, an Internet channel may distribute text or music worldwide, while a public address system in (for example) a workplace may broadcast very limited ad hoc soundbites to a small population within its range.

The sequencing of content in a broadcast is called a schedule.

Television and radio programs are distributed through radio broadcasting or cable, often both simultaneously. By coding signals and having decoding equipment in homes, the latter also enables subscription-based channels and pay-per-view services.

A broadcasting organization may broadcast several programs at the same time, through several channels (frequencies), for example BBC One and Two. On the other hand, two or more organizations may share a channel and each use it during a fixed part of the day. Digital radio and digital television may also transmit multiplexed programming, with several channels compressed into one ensemble.

When broadcasting is done via the Internet the term webcasting is often used.

Broadcasting forms a very large segment of the mass media.

Broadcasting to a very narrow range of audience is called narrowcasting.

In a broadcast system (television), journalists or reporters are also involved with editing the video material that has been shot alongside their research, and in working on the visual narrative of the story. Broadcast journalists often make an appearance in the news story at the beginning or end of the video clip.

In television or broadcast journalism, news analysts (also called news-casters or news anchors) examine, interpret, and broadcast news received from various sources of information. Anchors present this as news, either videotaped or live, through transmissions from on-the-scene reporters (news correspondents).

News films ("clips") can vary in length; there are some which may be as long as ten minutes, others that need to fit in all the relevant information and material in two or three minutes. News channels these days have also begun to host special documentary films that stretch for much longer durations and are able to explore a news subject or issue in greater detail.

The desk persons categorise news stories with various formats according to the merit of the story. Such formats include AVO, AVO Byte, Pkg, VO SOT, VOX POP, and Ancho Visual.

Newscasters function at large stations and networks that usually specialize in a particular type of news, such as sports or weather. Weathercasters, also called weather reporters, report current and forecast weather conditions. They gather information from national satellite weather services, wire services, and local and regional weather bureaus. Some weathercasters are trained meteorologists and develop their own weather forecasts. Sportscasters select, write, and deliver sports news. This may include interviews with sports personalities and coverage of games and other sporting events. 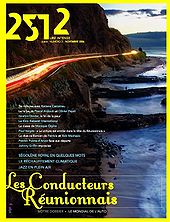 A newsmagazine, sometimes called news magazine, is a usually weekly magazine featuring articles on current events. News magazines generally go a little more in-depth into stories than newspapers, trying to give the reader an understanding of the context surrounding important events, rather than just the facts.

A newspaper is a lightweight and disposable publication (more specifically, a periodical), usually printed on low-cost paper called newsprint. It may be general or special interest, and may be published daily, weekly, biweekly, monthly, bimonthly, or quarterly.

General-interest newspapers are usually journals of current news on a variety of topics. Those can include political events, crime, business, sports, and opinions (either editorials, columns, or political cartoons). Many also include weather news and forecasts. Newspapers increasingly use photographs to illustrate stories; they also often include comic strips and other entertainment, such as crosswords. 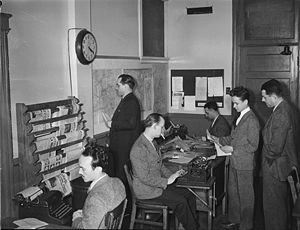 Journalists at work in Montreal in the 1940s

A story is a single article, news item or feature, usually concerning a single event, issue, theme, or profile of a person. Correspondents report news occurring in the main, locally, from their own country, or from foreign cities where they are stationed.

Most reporters file information or write their stories electronically from remote locations. In many cases, breaking stories are written by staff members, through information collected and submitted by other reporters who are out on the field gathering information for an event that has just occurred and needs to be broadcast instantly. Radio and television reporters often compose stories and report "live" from the scene. Some journalists also interpret the news or offer opinions and analysis to readers, viewers, or listeners. In this role, they are called commentators or columnists.

Reporters take notes and also take photographs or shoot videos, either on their own, or through a photographer or camera person. In the second phase, they organize the material, determine the focus or emphasis (identify the peg), and finally write their stories. The story is then edited by news or copy-editors (US style) or sub-editors in Europe, who function from the news desk. The headline of the story is decided by the news desk, and practically never by the reporter or the writer of the piece. Often, the news desk also heavily re-writes or changes the style and tone of the first draft prepared by the reporter / writer originally. Finally, a collection of stories that have been picked for the newspaper or magazine edition, are laid out on dummy (trial) pages, and after the chief editor has approved the content, style and language in the material, it is sent for publishing. The writer is given a byline for the piece that is published; his or her name appears alongside the article. This process takes place according to the frequency of the publication. News can be published in a variety of formats (broadsheet, tabloid, magazine and periodical publications) as well as periods (daily, weekly, semi-weekly, fortnightly or monthly).

A newsreel was a documentary film common in the first half of the 20th century, that regularly released in a public presentation place containing filmed news stories.

Created by Pathé Frères of France in 1908, this form of film was a staple of the typical North American, British, and Commonwealth countries (especially Canada, Australia and New Zealand), and throughout European cinema programming schedule from the silent era until the 1960s when television news broadcasting completely supplanted its role.

Pathé would eventually merge with RKO...

An example of a newsreel story is in the film Citizen Kane (which was prepared by RKO's actual newsreel staff), which includes a fictional newsreel that summarizes the life of the title character.

Online journalism is reporting and other journalism produced or distributed via the Internet.

An early leader was The News & Observer in Raleigh, North Carolina, USA.

Many news organizations based in other media also distribute news online. How much they take advantage of the medium varies. Some news organizations, such as the Gongwer News Service, use the Web only or primarily.

The Internet challenges traditional news organizations in several ways. They may be losing classified ads to Web sites, which are often targeted by interest instead of geography. The advertising on news Web sites is sometimes insufficient to support the investment.

Even before the Internet, technology and perhaps other factors were dividing people's attention, leading to more but narrower media outlets.

Online journalism also leads to the spread of independent online media such as openDemocracy and the UK, Wikinews as well as allowing smaller news organizations to publish to a broad audience, such as mediastrike.

By covering news, politics, weather, sports, entertainment, and vital events, the daily media shape the dominant cultural, social and political picture of society. Beyond the media networks, independent news sources have evolved to report on events which escape attention or underlie the major stories. In recent years, the blogosphere has taken reporting a step further, mining down to the experiences and perceptions of individual citizens.

An exponentially growing phenomenon, the blogosphere can be abuzz with news that is overlooked by the press and TV networks. Apropos of this was Robert F. Kennedy Jr.'s 11,000-word Rolling Stone article apropos of the 2004 United States presidential election, published June 1, 2006. By June 8, there had been no mainstream coverage of the documented allegations by President John F. Kennedy's nephew. On June 9, this sub-story was covered by a Seattle Post-Intelligencer article. [1]

Media coverage during the 2008 Mumbai attacks highlighted the use of new media and Internet social networking tools, including Twitter and Flickr, in spreading information about the attacks, observing that Internet coverage was often ahead of more traditional media sources. In response, traditional media outlets included such coverage in their reports.[2] However, several outlets were criticised as they did not check for the reliability and verifiability of the information.[3]

Newspaper "gone to the Web" in California

The Internet has allowed the formal and informal publication of news stories through mainstream media outlets as well as blogs and other self-published news stories. Journalists working on the Internet have been referred to as J-Bloggers, a term coined by Australian Media Academic Dr Nicola Goc to describe journalists who [blog] and [blog]gers who produce journalism. "J-Bloggers: Internet bloggers acting in the role of journalists disseminating newsworthy information, who subscribe to the journalistic ideals of an obligation to the truth and the public's right to know" (Media and Journalism: Theory to Practice (2008) Melbourne: OUP, p45) . The World Wide Web has also seen the development of Online Newspapers and Online magazine. E-zines is a result of the new magazine templates used by literature Broadcasting a .com Media, is one example incorporated within its Internet eZine "The Reviewer" not found on magazine racks to keep up with the economy and stay solvent in 2009 say Journalist Perry Campanella editor for Literature Broadcasting with Video Book Presentations Filmography, produced by Richard Levine a Worldwide Publishing Corporation incorporating multilinguale features not found on magazine rack placements, at the touch of a button in the 21 Century a News Wire headline.

Newscasters function at large stations and networks that usually specialize in a particular type of news, such as sports or weather. Weathercasters, also called weather reporters, report current and forecast weather conditions. They gather information from national satellite weather services, wire services, and local and regional weather bureaus. Some weathercasters are trained meteorologists and develop their own weather forecasts. Sportscasters select, write, and deliver sports news. This may include interviews with sports personalities and coverage of games and other sporting events.