Freedom of the press

Freedom of the press or freedom of the media is the freedom of communication and expression through vehicles including various electronic media and published materials. While such freedom mostly implies the absence of interference from an overreaching state, its preservation may be sought through constitutional or other legal protections.

The Universal Declaration of Human Rights states: "Everyone has the right to freedom of opinion and expression; this right includes freedom to hold opinions without interference, and impart information and ideas through any media regardless of frontiers"

This philosophy is usually accompanied by legislation ensuring various degrees of freedom of scientific research (known as scientific freedom), publishing, press and printing the depth to which these laws are entrenched in a country's legal system can go as far down as its constitution. The concept of freedom of speech is often covered by the same laws as freedom of the press, thereby giving equal treatment to spoken and published expression.

Besides legal definitions, some non-governmental organizations use other criteria to judge the level of press freedom around the world: 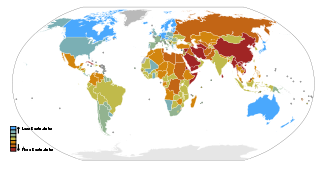 Freedom of the press worldwide according to Reporters Without Borders.

Every year, Reporters Without Borders establishes a ranking of countries in terms of their freedom of the press. The Worldwide press freedom index list is based on responses to surveys sent to journalists that are members of partner organisations of the RWB, as well as related specialists such as researchers, jurists and human rights activists. The survey asks questions about direct attacks on journalists and the media as well as other indirect sources of pressure against the free press, such as non-governmental groups. RWB is careful to note that the index only deals with press freedom, and does not measure the quality of journalism.

In 2010, the countries where press was the most free were Finland, Iceland, Netherlands, Norway and Sweden. The country with the least degree of press freedom was Eritrea, followed by North Korea, Turkmenistan, Iran and Myanmar (Burma).[1]

Freedom of the Press

Freedom of the Press is a yearly report by US-based non-governmental organization Freedom House, measuring the level of freedom and editorial independence enjoyed by the press in every nation and significant disputed territories around the world. Levels of freedom are scored on a scale from 1 (most free) to 100 (least free). Depending on the basics, the nations are then classified as "Free", "Partly Free", or "Not Free".

According to Reporters Without Borders, more than a third of the world's people live in countries where there is no press freedom. Overwhelmingly, these people live in countries where there is no system of democracy or where there are serious deficiencies in the democratic process. Freedom of the press is an extremely problematic problem/concept for most non-democratic systems of government since, in the modern age, strict control of access to information is critical to the existence of most non-democratic governments and their associated control systems and security apparatus. To this end, most non-democratic societies employ state-run news organizations to promote the propaganda critical to maintaining an existing political power base and suppress (often very brutally, through the use of police, military, or intelligence agencies) any significant attempts by the media or individual journalists to challenge the approved "government line" on contentious issues. In such countries, journalists operating on the fringes of what is deemed to be acceptable will very often find themselves the subject of considerable intimidation by agents of the state. This can range from simple threats to their professional careers (firing, professional blacklisting) to death threats, kidnapping, torture, and assassination. Reporters Without Borders reports that, in 2003, 42 journalists lost their lives pursuing their profession and that, in the same year, at least 130 journalists were in prison as a result of their occupational activities. In 2005, 63 journalists and 5 media assistants were killed worldwide.

According to the Press Freedom Index for 2007, Iran ranked 166th out of 169 nations. Only three other countries - Eritrea, North Korea and Turkmenistan - had more restrictions on news media freedom than Iran.[3] The government of Ali Khamenei and the Supreme National Security Council had imprisoned 50 journalists in 2007 and had all but eliminated press freedom.[4] Reporters Without Borders (RWB) has dubbed Iran the "Middle East's biggest prison for journalists."[5]

The Glorious Revolution of 1688 in England established parliamentary sovereignty over the Crown and, above all, the right of revolution. A major contributor to Western liberal theory was John Locke. Locke argued in Two Treatises of Government that the individual placed some of his rights present in the state of nature in trusteeship with the sovereign (government) in return for protection of certain natural individual rights. A social contract was entered into by the people. 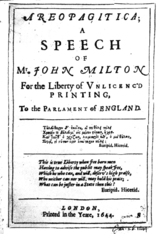 Until 1694, England had an elaborate system of licensing. No publication was allowed without the accompaniment of a government-granted license. Fifty years earlier, at a time of civil war, John Milton wrote his pamphlet Areopagitica. In this work Milton argued forcefully against this form of government censorship and parodied the idea, writing "when as debtors and delinquents may walk abroad without a keeper, but unoffensive books must not stir forth without a visible jailer in their title." Although at the time it did little to halt the practice of licensing, it would be viewed later a significant milestone as one of the most eloquent defenses of press freedom.

Milton's central argument was that the individual is capable of using reason and distinguishing right from wrong, good from bad. In order to be able to exercise this ration right, the individual must have unlimited access to the ideas of his fellow men in “a free and open encounter." From Milton's writings developed the concept of the open marketplace of ideas, the idea that when people argue against each other, the good arguments will prevail. One form of speech that was widely restricted in England was seditious libel, and laws were in place that made criticizing the government a crime. The King was above public criticism and statements critical of the government were forbidden, according to the English Court of the Star Chamber. Truth was not a defense to seditious libel because the goal was to prevent and punish all condemnation of the government.

John Stuart Mill approached the problem of authority versus liberty from the viewpoint of a 19th century utilitarian: The individual has the right of expressing himself so long as he does not harm other individuals. The good society is one in which the greatest number of persons enjoy the greatest possible amount of happiness. Applying these general principles of liberty to freedom of expression, Mill states that if we silence an opinion, we may silence the truth. The individual freedom of expression is therefore essential to the well-being of society.

The Indian Constitution, while not mentioning the word "press", provides for "the right to freedom of speech and expression" (Article 19(1) a). However this right is subject to restrictions under sub clause (2), whereby this freedom can be restricted for reasons of "sovereignty and integrity of India, the security of the State, friendly relations with foreign States, public order, preserving decency, preserving morality, in relation to contempt, court, defamation, or incitement to an offense". Laws such as the Official Secrets Act and Prevention of Terrorist Activities Act[9] (PoTA) have been used to limit press freedom. Under PoTA, person could be detained for up to six months for being in contact with a terrorist or terrorist group. PoTA was repealed in 2006, but the Official Secrets Act 1923 continues.

For the first half-century of independence, media control by the state was the major constraint on press freedom. Indira Gandhi famously stated in 1975 that All India Radio is "a Government organ, it is going to remain a Government organ..."[10] With the liberalization starting in the 1990s, private control of media has burgeoned, leading to increasing independence and greater scrutiny of government. Organizations like CNN-IBN, NDTV and Times Now have been particularly influential, e.g. in bringing about the resignation of powerful Haryana minister Venod Sharma.[11]

In 1933 Freedom of the Press was suppressed in Germany by the Reichstag Fire Decree of President Paul Von Hindenburg, just as Adolf Hitler was coming to power. Hitler largely suppressed freedom of the press through Joseph Goebbels' Ministry of Public Enlightenment and Propaganda. As the Ministry's name implies, propaganda did not carry the negative connotations that it does today (or that it did in the Allied countries); how-to manuals were openly distributed by that same ministry explaining the craft of effective propaganda. The Ministry also acted as a central control-point for all media, issuing orders as to what stories could be run and what stories would be suppressed. Anyone involved in the film industry—from directors to the lowliest assistant—had to sign an oath of loyalty to the Nazi Party, due to opinion-changing power Goebbels perceived movies to have. (Goebbels himself maintained some personal control over every single film made in Nazi Europe.) Journalists who crossed the Propaganda Ministry were routinely imprisoned or shot as traitors. The Sicherheitsdienst and other Nazi police organizations also created a network of internal, domestic spying, so that for example, the White Rose Society was in constant fear of discovery and execution.

Freedom of Press laws are first passed in the Polish–Lithuanian Commonwealth in 1539.[12]

The world's first Freedom of the Press Act was introduced in Sweden-Finland in 1766, mainly due to classical liberal member of parliament Anders Chydenius.[13][14][15][16][17]

Between September 4, 1770 and October 7, 1771 the kingdom of Denmark–Norway had the most unrestricted freedom of press of any country in Europe. This occurred during the regime of Johann Friedrich Struensee, whose first act was to abolish the old censorship laws. However, due to the great amount of mostly anonymous pamphlets published that was critical and often slanderous towards Struensee's own regime, he reinstated some restrictions regarding the freedom of press a year later, October 7, 1771.[18]

Many of the traditional means of delivering information are being slowly superseded by the increasing pace of modern technological advance. Almost every conventional mode of media and information dissemination has a modern counterpart that offers significant potential advantages to journalists seeking to maintain and enhance their 'freedom of speech'. A few simple examples of such phenomena include:

Naturally, governments are responding to the challenges posed by new media technologies by deploying increasingly sophisticated technology of their own (a notable example being China's attempts to impose control through a state run internet service provider that controls access to the Internet) but it seems that this will become an ever increasingly difficult task as journalists continue to find new ways to exploit technology and stay one step ahead of the generally slower moving government institutions that attempt to censor them.

In May 2010, U.S. President Barack Obama signed legislation intended to promote a free press around the world, a bipartisan measure inspired by the murder in Pakistan of Daniel Pearl, the Wall Street Journal reporter, shortly after the September 11 attacks in 2001. The legislation, called the Daniel Pearl Freedom of the Press Act, requires the United States Department of State to expand its scrutiny of news media restrictions and intimidation as part of its annual review of human rights in each country.[19]