Pixelization
This article is about the graphical editing/censorship technique. For the undesirable phenomenon in which individual pixels are visible, see Pixelation. For the stop motion animation technique, see Pixilation.

Pixelization is a video- and image-editing technique in which an image is blurred by displaying part or all of it at a markedly lower resolution. It is primarily used for censorship. The effect is a standard graphics filter, available in all but the most basic bitmap graphics editors.

Pixelization was used to anonymize this photograph.

A familiar example of pixelization can be found in television news and documentary productions, in which vehicle license plates and faces of suspects at crime scenes are routinely obscured to maintain the presumption of innocence, as in the television series COPS. Bystanders and others who do not sign release forms are also customarily pixelized. Footage of nudity (including genitalia, buttocks, or breasts) is likewise obscured in some media: before the watershed in many countries, in newspapers or general magazines, or in places in which the public cannot avoid seeing the image (such as on billboards). Drug references, as well as gestures considered obscene (such as the finger) may also be censored in this manner. Pixelization is not usually used for this purpose in films, DVDs, subscription television services, pornography (except for countries in which the law requires it). When obscene language is censored by an audible bleep, the mouth of the speaker may be pixelized to prevent lip reading, often as in COPS graphic injuries and excess blood will be pixelized.

Pixelization may also be used to avoid unintentional product placement, or to hide elements that would date a broadcast, such as date and time stamps on home video submissions. Censorship for such purposes is most common on reality television series.[citation needed]

Pixelization has also been used for artistic effect, notably in the art print The Wave of the Future, a reinterpretation of Katsushika Hokusai's The Great Wave at Kanagawa. In this updated print, the image of the large ocean wave shifts from the traditional style of the Japanese woodcut print to a pixelized image and finally to a wireframe model computer graphics image.[1][2] Westworld (1973) was the first feature film to use digital image processing to pixelize photography to simulate an android's point of view. 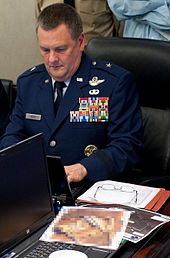 Marshall B. Webb, an American general, sits in the White House Situation Room during Operation Geronimo. A classified document on the desk in front of him was pixelized by the government of the United States before the photo was released.

For many censorship purposes, pixelization has been supplanted by blurring the image, or black rectangular or square boxes (known as censor bars) may be used to cover parts of images completely (for example, a black box inserted over the eyes rather than pixelization of the entire face).

A drawback of pixelization is that any differences between the large pixels can be exploited in moving images to reconstruct the original, unpixelized image[citation needed]; squinting at a pixelized, moving image can sometimes achieve a similar result. In both cases, integration of the large pixels over time allows smaller, more accurate pixels to be constructed in a still image result. Completely obscuring the censored area with pixels of a constant color or pixels of random colors escapes this drawback but can be more aesthetically jarring.

Nudity is obscured on network television in the United States. Japanese pornography laws require that genitals in films (including animated works) be obscured. In Thailand, restrictions are placed on television broadcast depiction of cigarettes being smoked,[3] alcohol being consumed, or guns being pointed at people. Pixelization is the most common method of censoring this content.