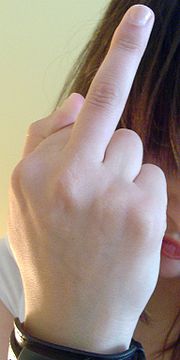 In Western culture, the finger (as in giving someone the finger or the bird), also known as the middle finger, is an obscene hand gesture, often meaning the phrases "fuck off" ("screw off"), "fuck you" ("screw you") or "up yours". It is performed by showing the back of a closed fist that has only the middle finger extended upwards.

In Ancient Greece it was known as the κατάπυγον[1][2] (katapugon, from kata - κατά, "downwards"[3] and pugē - πυγή, "rump, buttocks"[4]) and reference is made to using the finger in ancient Greek comedy to insult another person, where the term katapugon also meant "a male (or a female, katapugaina[5]) who submits to anal penetration".[6] It is identified as the digitus impudicus (impudent finger) in Ancient Roman writings[7] and the widespread usage of the finger in many cultures is likely due to the geographical influence of the Roman Empire and Greco-Roman civilization. Another possible origin of this gesture can be found in the first-century Mediterranean world, where extending the finger was one of many methods used to divert the ever-present threat of the evil eye offense.[8]

The gesture has also been referred to flipping, flicking off (sometimes flashing or flying) the bird;[9] or it could be flipping somebody off.[9]