Everett McKinley Dirksen (January 4, 1896 – September 7, 1969) was an American politician of the Republican Party. He represented Illinois in the U.S. House of Representatives (1933–1949) and U.S. Senate (1951–1969). As Senate Minority Leader for over a decade, he played a highly visible and key role in the politics of the 1960s, including helping to write and pass the Civil Rights Act of 1964 and the Open Housing Act of 1968, both landmarks of civil rights legislation. He was also one of the Senate's strongest supporters of the Vietnam War.

Dirksen was born to Johann Friedrich Dirksen and his wife Antje Conrady, German immigrants who lived in Pekin, Illinois, a small city near Peoria, Illinois. Everett had a fraternal twin, Thomas Dirksen, and also had a brother named Benjamin Harrison, a nod to the Republican leanings of his father, who died when Everett was nine years old.

Dirksen grew up on a farm on Pekin's outskirts, in a section called "Beantown" because immigrants grew beans instead of flowers. He attended the local schools and then entered the University of Minnesota Law School, but dropped out during World War I to enlist in the U.S. Army, serving as a second lieutenant in a field artillery battery.[1]

After the war, Dirksen invested money in an electric washing machine, but that enterprise failed. He then joined his brothers in running a bakery, and also indulged his artistic side by writing a number of unpublished short stories, as well as plays with former classmate Hubert Ropp. His political career began in 1927, when he was elected to the Pekin city council as the city's finance commissioner.[2]

After losing in the 1930 Republican primary, Dirksen won the nomination and the congressional seat in 1932, and was re-elected seven times. His support for many New Deal programs marked him as a moderate, pragmatic Republican. During World War II, he lobbied successfully for an expansion of congressional staff resources to eliminate the practice under which House and Senate committees borrowed executive branch personnel to accomplish legislative work. Dirksen was able to secure the passage of an amendment to the Lend-Lease bill by introducing a resolution while 65 of the House's Democrats were at a luncheon. The amendment provided that the Senate and the House could, by a simple majority in a concurrent resolution, revoke the powers granted to the President.[3]

Dirksen's penchant for changing his mind during his days as a congressman was noted by the Chicago Sun-Times, which once noted that he had changed his mind 62 times on foreign policy matters, 31 times on military affairs, and 70 times on agricultural policies.[4]

In December 1943, Congressman Dirksen announced that he would be a candidate for the Republican Presidential nomination in 1944. He stated that a coalition of midwestern Republican Congressmen had urged him to run and that his campaign was serious. However, press pundits had assumed that the candidacy was merely a vehicle to siphon support away from the campaign of Wendell Willkie, whose reputation as a maverick and staunch internationalist had earned him the hatred of many Republican Party regulars, especially in the midwest.[5] Dirksen's presidential campaign was apparently still alive on the eve of the 1944 convention, since Time Magazine speculated that he was in reality running for Vice President.[6] When all was said and done, he received no votes for either office at the 1944 Republican Convention.

Dirksen remained at the House of Representatives, but in 1947, he awakened to trouble in his right eye that was diagnosed as chorioretinitis, inflammation in the retina. Despite a number of physicians (including one from Johns Hopkins University) recommending that the eye be removed, Dirksen chose treatment and rest and recovered most of his sight in the eye. In 1948, he declined to run for re-election because of the ailment, but returned two years later and was elected to the United States Senate.[7]

After recovering from his health problems, Dirksen was elected to the Senate in 1950 when he unseated Senate Majority Leader Scott Lucas. In the campaign, the support of Wisconsin Senator Joseph McCarthy helped Dirksen to gain a narrow victory. Dirksen became an ally of McCarthy and tried but failed to get him to apologize for his misdeeds to stave off censure in 1954. Dirksen voted not to censure him but privately conceded that McCarthy "had lost his senses".[citation needed] Dirksen's canny political skill, rumpled appearance, and convincing, if sometimes flowery, overblown oratory (he was hence dubbed by his critics "the Wizard of Ooze") gave him a prominent national reputation.

In 1952, Dirksen was a supporter of the presidential candidacy of fellow Senator Robert A. Taft of Ohio, the longtime leader of Republican conservatives. Dirksen garnered attention at the convention when he gave a speech attacking New York Governor Thomas E. Dewey, a liberal Republican and the leading supporter of Taft's opponent for the Republican presidential nomination, General Dwight Eisenhower. During the speech, Dirksen pointed at Dewey on the convention floor and shouted, "Don't take us down the path to defeat again," a reference to Dewey's presidential defeats in 1944 and 1948. His speech was met by cheers from conservative delegates and loud boos from pro-Eisenhower delegates. Still, Eisenhower defeated Taft for the nomination; Dirksen then supported Eisenhower's candidacy.

In 1959, he was elected Minority Leader of the Senate, defeating Kentucky's more liberal Senator, John Sherman Cooper, by a vote of 20 to 14. Dirksen successfully united the various factions of the Republican Party by granting younger Republicans more representation in the Senate leadership and better committee appointments. He held the position of Senate Minority Leader until his death following cancer surgery on September 7, 1969 at Walter Reed Hospital in Washington, D.C.

Along with Charles Halleck and later Gerald Ford (the Republican Minority Leaders of the House), Dirksen was the official voice of the Republican Party during most of the 1960s, and he was often featured on television news programs. On several occasions during this period, political cartoonist Herblock depicted Dirksen and Halleck as vaudeville song-and-dance men, wearing identical elaborate costumes and performing an act called "The Ev and Charlie Show".

Dirksen's voting record was consistently conservative on economic issues. He developed a good rapport with the Senate's majority leaders, Lyndon B. Johnson and Mike Mansfield. On foreign policy, he reversed his early isolationism to support the internationalism of Republican President Dwight D. Eisenhower and Democratic President John F. Kennedy. He was a leading "hawk" on the issue of the Vietnam War — a position he held well before Democratic President Lyndon B. Johnson decided to escalate the war. Dirksen said in February 1964: [Dietz p 59]

First I agree that obviously we cannot retreat from our position in Vietnam. I have been out there three times, once as something of an emissary for then President Eisenhower. I took a good look at it. It is a difficult situation, to say the least. But we are in to the tune of some $350 million. I think the last figure I have seen indicates that we have over 15,500 military out there, ostensibly as advisors and that sort of thing. We are not supposed to have combatant troops, even though we were not signatories to the treaty that was signed at Geneva when finally they got that whole business out of the fire. But we are going to have to muddle through for a while and see what we do. Even though it costs us $1.5 million a day.

As President Johnson followed Dirksen's recommendations and escalated the war, Dirksen gave him strong public support, as well as strong support inside the Republican caucus, even as some Republicans advised him that it would be to the party's advantage to oppose Johnson. Ford commented, "I strongly felt that although I agreed with the goals of the Johnson administration in Vietnam, I vigorously criticized their prosecution of the war. Now, Dirksen never took that same hard-line position that I took." [Dietz 149] 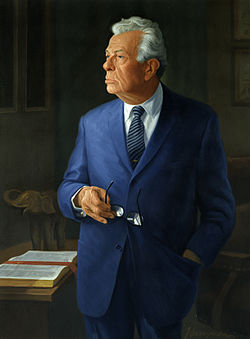 Dirksen played a key role in passage of the 1964 Civil Rights bill.

In 1964, as Southern Democratic Senators staged a filibuster that ran 54 days to block passage of the Civil Rights bill of 1964 (see Civil Rights Act of 1964, Senators Dirksen, Thomas Kuchel (R-CA), Hubert Humphrey (D-MN), and Mike Mansfield (D-MT) introduced a substitute bill and slightly weaker bill that they hoped would attract enough Republican swing votes to end the filibuster. The compromise bill was weaker than the House version regarding government power to regulate the conduct of private business, but it was not so weak as to cause the House to reconsider the legislation. After 57 days of filibuster, the substitute bill passed in the Senate and then the House-Senate conference committee agreed to adopt the Senate version of the bill.

At the vote for cloture on the filibuster against the Civil Rights Act, Dirksen said

"Victor Hugo wrote in his diary substantially this sentiment, 'Stronger than all the armies is an idea whose time has come.' The time has come for equality of opportunity in sharing of government, in education, and in employment. It must not be stayed or denied."

On March 22, 1966, Dirksen introduced a constitutional amendment that would permit public school administrators to provide for organized prayer by students. This amendment was seen by many to violate the principle of separation of church and state, and was defeated in the Senate with only 49 affirmative votes, falling short of the 67 votes required for a constitutional amendment.

He is often remembered for the quip attributed to him: "A billion here, a billion there, pretty soon, you're talking real money". He did make similar remarks, but probably not that exact one.[8] Dirksen is also quoted as having said "The mind is no match with the heart in persuasion; constitutionality is no match with compassion." (See wikiquotes of Everett Dirksen.) 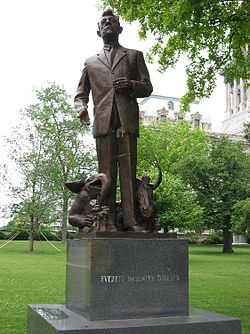 Statue of Senator Dirksen on the grounds of the Illinois State Capitol in Springfield, Illinois.

Dirksen was also legendary for his fondness for the common marigold. When political discussions became tense, Dirksen would lighten the atmosphere by taking up his perennial campaign to have the marigold named the national flower. Although he was ultimately unsuccessful in his campaign, in 1972 his hometown of Pekin started holding an annual Marigold Festival in his memory, and now calls itself the "Marigold Capital of the World".

He recorded four albums in his resonant bass speaking voice, one of which, Gallant Men, unexpectedly made it to #16 on the U.S. Billboard charts and won a Grammy Award for Best Documentary Recording in 1968. The single "Gallant Men" (which reached #29 on the Hot 100) made Dirksen, 71 years 3 days old, the oldest person to reach the Hot 100's top 40 at the time (7 January 1967), at #33, a little more than 2 1/2 years before Moms Mabley would, at 75 years 4 months, unseat him with her version of "Abraham, Martin And John" peaking at #35.

Dirksen made TV guest appearances such as What's My Line, The Hollywood Palace and The Red Skelton Show. Dirksen made a cameo appearance, not identified by name but effectively portraying himself, in the 1969 film The Monitors, a low-budget science-fiction movie in which invading extraterrestrials assert political dominion over the human race, claiming to do so for humanity's benefit. He also appeared in several other movies.[9]

In August 1969, Dirksen was found to have an asymptomatic peripherally-located mass in the upper lobe of the right lung, detected on chest x-rays. He entered Walter Reed Army Hospital for surgery, which was undertaken on September 2. A right upper lobectomy was performed successfully for what proved to be a lung cancer (adenocarcinoma). Mr. Dirksen initially did well postoperatively, but thereafter developed progressive complications that eventuated in bronchopneumonia. He suffered a cardiopulmonary arrest and died on September 7, 1969, at age 73.

In 1972, one of the Senate's buildings was renamed the Dirksen Senate Office Building in his honor. The headquarters of the United States District Court for the Northern District of Illinois is also named for him.