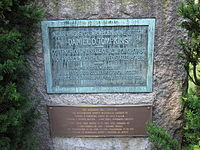 Tompkins was born in Scarsdale, Westchester County, New York at his home, the estate of Fox Meadow.[1] He graduated from Columbia College in New York City in 1795. Tompkins studied law and in 1797 was admitted to the bar, practicing in New York City. He was a delegate to the New York State Constitutional Convention in 1801, a member of the New York State Assembly in 1804, and was elected to the 9th United States Congress, but resigned before the beginning of the term to accept, at age 30, an appointment as associate justice of the New York Supreme Court, in which capacity he served from 1804 to 1807. His brother, Caleb Tompkins (1759–1846), was a United States Representative from New York from 1817 to 1821.

During the War of 1812, Tompkins proved to be one of the most effective war governors. He played an important role in reorganizing the state militia and promoted the formation of a standing state military force based on select conscription.

In 1815 Tompkins established a settlement along the eastern shore of Staten Island that came to be called Tompkinsville. He built a dock along the waterfront in the neighborhood in 1817 and began offering daily steam ferry service between Staten Island and Manhattan.

Tompkins was elected Vice President on the ticket with James Monroe in 1816, and was reelected in 1820, serving from March 4, 1817, to March 4, 1825. Attempting to unseat the incumbent DeWitt Clinton, he ran in April 1820, as a sitting vice president, for Governor of New York and lost – Clinton received 47,447 votes, Tompkins 45,900. He was a delegate to the New York State Constitutional Convention in 1821, serving as its president.

While as governor of New York, Tompkins personally borrowed money and used his own property as collateral when the New York state legislature would not approve the necessary funds for the War of 1812. After the war, neither the state nor the federal government reimbursed him so he could repay his loans. Years of litigation did not end until 1824, at which point the State of New York and the federal government owed Tompkins $90,000, a significant sum in those days. His financial problems took a toll on his health, with Tompkins falling into alcoholism, and as vice president he at times presided over the Senate while drunk. He died in Tompkinsville three months after retiring as Vice President and was interred in the Minthorne vault in the west yard of St. Mark's Church in-the-Bowery, New York City. Tompkins had the shortest post-vice presidency of any person who survived the office: 99 days (March 4, 1825–June 11, 1825).

Tompkins would be the last Vice-President to be elected to two terms with the same President until Thomas R. Marshall was elected Vice-President, first in 1912 with Woodrow Wilson and again in 1916. Tompkins' immediate successor, John C. Calhoun served two consecutive terms but under different presidents (John Quincy Adams in 1824 and Andrew Jackson in 1828), and resigned the office before completing his second term. 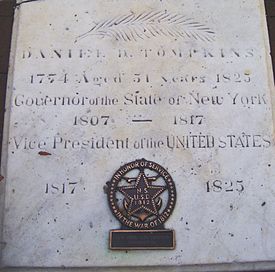 The cover to the vault in which Tompkin's remains were interred

Tompkinsville, a neighborhood on Staten Island, is named for Tompkins. There is also a Masonic lodge in the town named for him. Tompkins is credited with being one of the founding members of the Brighton Heights Reformed Church on Staten Island. The church was founded in 1823, during his term as vice president. Its first meeting place was in what was known as Quarantine, a predecessor of the facility on Ellis Island.

Tompkins County, Tompkins Square Park in Manhattan, Public School 69 Daniel D. Tompkins School in Staten Island, and the Town of Tompkins are named after him, as is Tompkins Road, running between Post Road (NY-22) and Fenimore Road in Scarsdale, New York. Tompkinsville, Kentucky, is named for Tompkins. It is the county seat of Monroe County, Kentucky, which is named for the president under whom Tompkins served as vice president.