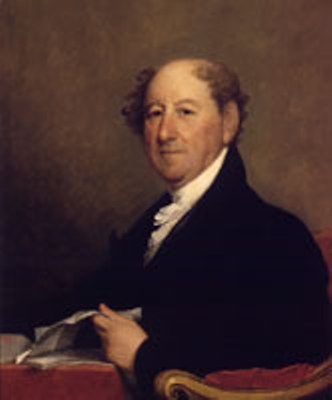 Rufus King ( - ) was an American lawyer, politician, and diplomat. He was a delegate from to the and the Constitutional Convention. He represented in the , served as Minister to Britain, and was the Federalist candidate for both Vice President (1804, 1808) and (1816).

Rufus King was born in Scarborough, which was then a part of but is now in the state of . King attended Dummer Academy (now ) and Harvard College, graduating in 1777. He began to read law under , but his studies were interrupted in 1778 when King volunteered for militia duty in the . Appointed a major, he served as an aide to General Sullivan [from Colonial Hall. Can be retrieved from http://www.colonialhall.com/king/king.php] in the . [Steven E. Siry. "King, Rufus"; "", Feb. 2000.] After the campaign, King returned to his apprenticeship under Parsons until he was admitted to the bar in 1780. He began a legal practice in . King was first elected to the Massachusetts state assembly in 1783, and returned there each year until 1785. sent him to the from 1784 to 1787.

In 1787, King was sent to the Federal constitutional convention at Philadelphia where he worked closely with on the "Committee of Style and Arrangement" to prepare the final draft. He returned home and went to work to get the Constitution ratified and to position himself to be named to the U.S. Senate. He was only partially successful. Massachusetts ratified the Constitution, but his efforts to be elected to the Senate failed.

At Hamilton's urging he moved to and was elected to the New York state legislature in 1788. When the U.S. Constitution took effect, the legislature disagreed on who should serve in the state's second seat. Governor George Clinton proposed Rufus King as a compromise candidate, and he was elected, representing New York in the Senate from 1789 to 1796 and again from 1813 to 1825.

King played a major diplomatic role as the Minister to the Court of St. James (Britain) from 1796 to 1803 and again from 1825 to 1826. Although he was a leading Federalist, kept him in office until King asked to be relieved. He successfully settled disputes that the had opened for negotiation. His term was marked by friendship between the U.S. and Britain; it became hostility after 1805. While in Britain, he was in close personal contact with South American revolutionary and facilitated Miranda's trip to the United States in search of support for his failed 1806 expedition to .

He was the unsuccessful Federalist Party candidate for Vice President in 1804 and 1808. In April 1816 he lost the election for to the incumbent of the - Tompkins 45,412 votes, King 38,647. Later that year, King was nominated by the Federalists for President in 1816, again losing. King was the last presidential candidate to be nominated by the Federalists during their period as one of the participants in the of the United States.

King had a long history of opposition to the expansion of slavery and the slave trade. This stand was a product of moral conviction which coincided with the political realities of New England federalism. In 1785, King first opposed the extension of slavery into the Northwest Territories, although he was willing "to suffer the continuance of slaves until they can be gradually emancipated in states already overrun with them." He did not press the issue very hard at this time, however. At the Constitutional Convention he indicated his opposition to slavery was based upon the political and economic advantages it gave to the South, and he was willing to compromise for political reasons.

In 1817, he supported Senate action seeking abolition of the slave trade, and in 1819 spoke strongly for the antislavery amendment in the Missouri statehood bill. In 1819, his arguments were political, economic, and humanitarian; the extension of slavery would adversely affect the security of the principles of freedom and liberty. After the he continued to support gradual emancipation in various ways. [Arbena 1965]

One of King’s most consequential interventions in Congress was in regards to the 1820 debate, which sought to limit slavery in as it became a state. King appealed to the now fading Revolutionary sense of equality to attack slavery. He declared that "laws or compacts imposing any such condition upon any human being are absolutely void, because contrary to the law of nature, which is the law of God, by which he makes his ways known to man, and is paramount to all human control." Though the amendment failed and Missouri became a slave state. King reflected the gradual ideological evolution of the Atlantic abolitionist movement. According to , this may have been the first time anywhere in the world that a political leader openly attacked slavery’s perceived legality in such a radical manner. In fact, the impact of King’s declaration was such that even suggests a possible link of inspiration between King’s declaration in Congress and the controversial slave uprising of 1822.

Many of King's family were also involved in politics and he had a number of prominent descendants. His brother William King was the first governor of Maine and a prominent merchant, and his other brother, , was a U. S. Congressman.

In 1786, King married Mary Alsop, the daughter of Congressman , and their sons and also went on to serve in the Congress. Another son, Charles King, was a president of Columbia College, the father of Rufus King, and the grandfather of his namesake, Charles King. Rufus King's son Edward moved to Ohio and founded , while his youngest son Frederick became a well-respected physician.

King died on , 1827 at his farm in . He is buried in the Grace Church Cemetery in Jamaica, . The home that King purchased in 1805 and expanded thereafter and some of his farm make up King Park in Queens. The home, called , is now a museum and is open to the public.

The Rufus King School, also known as P.S. 26, in , was named after King, as was the Rufus King Hall on the campus. in , is named after his grandson, Rufus King, who moved to Milwaukee to become the editor of the "Milwaukee Sentinel". The school's teams are known as the Generals, because Rufus King the younger was a in the Civil War. He was instrumental in forming Wisconsin's renowned Iron Brigade. He and the Iron Brigade participated in the , Fredericksburg, and Gainesville. He was also Milwaukee's first superintendent of public schools, and a regent of The University of Wisconsin.