The Mantoux skin test consists of an intradermal injection of exactly one tenth of a milliliter (mL) of PPD tuberculin.

The size of induration is measured 48–72 hours later. Erythema (redness) should not be measured. 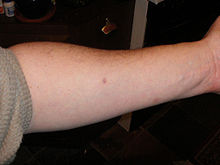 Mantoux test injection site in a subject without chronic conditions or in a high risk group clinically diagnosed as negative at 50 hours.

The Mantoux test (also known as the Mantoux screening test, Tuberculin Sensitivity Test, Pirquet test, or PPD test for Purified Protein Derivative) is a diagnostic tool for tuberculosis. It is one of the two major tuberculin skin tests used in the world, largely replacing multiple-puncture tests such as the Tine test. Until 2005, the Heaf test was used in the United Kingdom, but the Mantoux test is now used. The Mantoux test is also used in Australia, Bangladesh, Brazil, Canada, Chile, Hungary, India, Ireland, Israel, Netherlands, New Zealand, Pakistan, Peru, Poland, Portugal, Russia, South Africa, Spain, Trinidad and Tobago and the United States and is endorsed by the American Thoracic Society and Centers for Disease Control and Prevention (CDC)). It was also used in the USSR and is now prevalent in most of the former Soviet states.

Tuberculin is a glycerol extract of the tubercle bacillus. Purified protein derivative (PPD) tuberculin is a precipitate of non-species-specific molecules obtained from filtrates of sterilized, concentrated cultures. It was first described by Robert Koch in 1890. The test is named after Charles Mantoux, a French physician who built on the work of Koch and Clemens von Pirquet to create his test in 1907.

In 1939, M. A. Linnikova in the USSR created a modified version of PPD. In 1954, the Soviet Union started mass production of PPD-L, named after Linnikova.

A standard dose of 5 Tuberculin units (0.1 mL)[1] (The standard Mantoux test in the UK consists of an intradermal injection of 2TU of Statens Serum Institute (SSI) tuberculin RT23 in 0.1ml solution for injection.)[2] is injected intradermally (between the layers of dermis) and read 48 to 72 hours later. This intradermal injection is termed the mantoux technique. A person who has been exposed to the bacteria is expected to mount an immune response in the skin containing the bacterial proteins.

The reaction is read by measuring the diameter of induration (palpable raised hardened area) across the forearm (perpendicular to the long axis) in millimeters. If there is no induration, the result should be recorded as "0 mm". Erythema (redness) should not be measured.

The results of this test must be interpreted carefully. The person's medical risk factors determine at which increment (5 mm, 10 mm, or 15 mm) of induration the result is considered positive.[3] A positive result indicates TB exposure.

A tuberculin test conversion is defined as an increase of 10 mm or more within a 2-year period, regardless of age.

Due to the test's low specificity, most positive reactions in low-risk individuals are false-positives.[4] A false positive result may be caused by nontuberculous mycobacteria or previous administration of BCG vaccine. Prior vaccination with BCG may result in a false-positive result for many years afterwards.[5]

False positives can also occur when the injected area is touched, causing swelling and itching.

Those that are immunologically compromised, especially those with HIV and low CD4 T cell counts, frequently show negative results from the PPD test.[citation needed] This is because the immune system needs to be functional to mount a response to the protein derivative injected under the skin.

BCG vaccine and the Mantoux test

There is disagreement about the role of Mantoux testing in people who have been vaccinated. The US recommendation is that tuberculin skin testing is not contraindicated for BCG-vaccinated persons and that prior BCG vaccination should not influence the interpretation of the test. The UK recommendation is that interferon-γ testing should be used to help interpret positive Mantoux tests, and that serial tuberculin skin testing must not be done in people who have had prior BCG vaccination. In general, the US recommendation results in a much larger number of people being falsely diagnosed with latent tuberculosis, while the UK approach probably misses patients with latent tuberculosis who should be treated.[citation needed]

According to the U. S. guidelines, latent tuberculosis infection (LTBI) diagnosis and treatment for LTBI is considered for any BCG-vaccinated person whose skin test is 10 mm or greater, if any of these circumstances are present:

In cases of anergy, a lack of reaction by the body's defence mechanisms when it comes into contact with foreign substances, the tuberculin reaction will occur weakly, thus compromising the value of Mantoux testing. For example, anergy is present in AIDS, a disease which strongly depresses the immune system. Therefore, anergy testing is advised in cases where suspicion is warranted that it is present. However, routine anergy skin testing is not recommended.[6]

Some people who were previously infected with TB may have a negative reaction when tested years after infection, as the immune system response may gradually wane. This initial skin test, though negative, may stimulate (boost) the body's ability to react to tuberculin in future tests. Thus, a positive reaction to a subsequent test may be misinterpreted as a new infection, when in fact it is the result of the boosted reaction to an old infection.

Use two-step testing for initial skin testing of adults who will be retested periodically (e.g., health care workers). This ensures that any future positive tests can be interpreted as being caused by a new infection, rather than simply a reaction to an old infection.

A person who is diagnosed as "infected" on two-step testing is called a "tuberculin converter". The US recommendation that prior BCG-vaccination be ignored results in almost universal false diagnosis of tuberculosis infection in people who have had BCG (mostly foreign nationals).

As a replacement for the Mantoux test, several other tests are being developed. QuantiFERON-TB Gold is a blood test that measures the patient’s immune reactivity to the TB bacterium and is useful for initial and serial testing of persons with an increased risk of latent or active tuberculosis infection. Guidelines for the use of the QuantiFERON test were released by the CDC in December 2005.[8] QuantiFERON-TB Gold is Food and Drug Administration (FDA) approved in the United States, has CE Mark approval in Europe and has been approved by the MHLW in Japan.

The Heaf test is a tuberculin skin test formerly used in the United Kingdom, but discontinued in 2005.