George Whitefield (December 16, 1714 (O.S.) – September 30, 1770), also known as George Whitfield, was an English Anglican priest who helped spread the Great Awakening in Britain, and especially in the British North American colonies. He was one of the founders of Methodism and of the evangelical movement generally.[1] He became perhaps the best-known preacher in Britain and America in the 18th century, and because he traveled through all of the American colonies and drew great crowds and media coverage, he was one of the most widely recognized public figures in colonial America. 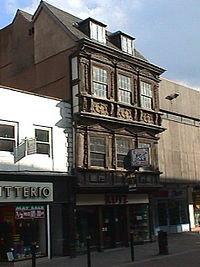 Whitefield was born at the Bell Inn, Southgate Street, Gloucester[2] in England.

Whitefield was the 5th son (7th child) of Thomas Whitefield and Elizabeth Edwards who kept an inn at Gloucester. At an early age, he found that he had a passion and talent for acting in the theatre, a passion that he would carry on through the very theatrical re-enactments of Bible stories that he told during his sermons. He was educated at the Crypt School, Gloucester, and Pembroke College, Oxford. Because Whitefield came from a poor background, he did not have the means to pay for his tuition. He therefore entered Oxford as a servitor, the lowest rank of students at Oxford. In return for free tuition, he was assigned as a servant to a number of higher ranked students. His duties included waking them in the morning, polishing their shoes, carrying their books and even assisting with required written assignments.[3] He was a part of the 'Holy Club' at Oxford University with the Wesley brothers, John and Charles. After reading Henry Scougal's The Life of God in the Soul of Man he became very religious. Following a religious conversion, he became very passionate for preaching his new-found faith. The Bishop of Gloucester ordained him before the canonical age.

Whitefield preached his first sermon in St Mary de Crypt Church[4] in his home town of Gloucester a week after his ordination. He had earlier become the leader of the Holy Club at Oxford when the Wesley brothers departed for Georgia. He adopted the practice of Howell Harris of preaching in the open-air at Hanham Mount, near Kingswood, Bristol. In 1738, before becoming parish priest of Savannah, Georgia, in the American colonies, he invited John Wesley to preach in the open-air for the first time at Kingswood and then Blackheath, London. After a short stay in Georgia, he returned home the following year to receive priest's orders and resumed his open-air evangelistic activities. 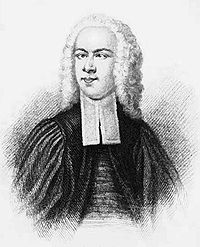 Three churches were established in England in his name: Bristol, and two churches in London: "Moorfields Tabernacle"; and "Tottenham Court Road Chapel". The society meeting at the second Kingswood School at Kingswood, a town on the eastern edge of Bristol, was eventuallly also named Whitefield's Tabernacle. Whitefield acted as chaplain to Selina, Countess of Huntingdon, and some of his followers joined the Countess of Huntingdon's Connexion, whose chapels were built by Selina, where a form of Calvinistic Methodism similar to Whitefield's was taught. Many of Selina's chapels were built in the English and Welsh counties, and one was erected in London—Spa Fields Chapel.

In 1739, Whitefield returned to England to raise funds to establish the Bethesda Orphanage, which is the oldest extant charity in North America. On returning to North America in 1740, he preached a series of revivals that came to be known as the Great Awakening of 1740. He preached nearly every day for months to large crowds of sometimes several thousand people as he traveled throughout the colonies, especially New England. His journey on horseback from New York City to Charleston was the longest then undertaken in North America by a white man.

Like his contemporary and acquaintance, Jonathan Edwards, Whitefield preached staunchly Calvinist theology that was in line with the "moderate Calvinism" of the Thirty-nine Articles.[5] While explicitly affirming God's sole agency in salvation, Whitefield freely offered the Gospel, saying at the end of his sermons: "Come poor, lost, undone sinner, come just as you are to Christ."[6]

The Anglican Church did not assign him a pulpit, so he began preaching in parks and fields in England on his own, reaching out to people who normally did not attend church. Like Jonathan Edwards, he developed a style of preaching that elicited emotional responses from his audiences. But Whitefield had charisma, and his voice (which according to many accounts, could be heard over vast distances), his small stature, and even his cross-eyed appearance (which some people took as a mark of divine favor) all served to help make him one of the first celebrities in the American colonies. Thanks to widespread dissemination of print media, perhaps half of all colonists eventually heard about, read about, or read something written by Whitefield. He employed print systematically, sending advance men to put up broadsides and distribute handbills announcing his sermons. He also arranged to have his sermons published.[7]

He first took to preaching in the open air on Hanham Mount, Kingswood, in southeast Bristol where a crowd of 20,000 people gathered to hear him. Even larger crowds—Whitefield estimated 30,000—met him in Cambuslang in 1742. 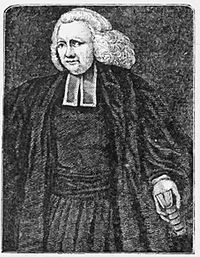 Benjamin Franklin attended a revival meeting in Philadelphia and was greatly impressed with Whitefield's ability to deliver a message to such a large group. Franklin had previously dismissed, as an exaggeration, reports of Whitefield preaching to crowds of the order of tens of thousands in England. When listening to Whitefield preaching from the Philadelphia court house, Franklin walked away towards his shop in Market Street until he could no longer hear Whitefield distinctly. He then estimated his distance from Whitefield and calculated the area of a semicircle centred on Whitefield. Allowing two square feet per person he computed that Whitefield could be heard by over thirty thousand people in the open air.[8]

Franklin admired Whitefield as a fellow intellectual but thought Whitefield's plan to run an orphanage in Georgia would lose money. He published several of Whitefield's tracts and was impressed by Whitefield's ability to preach and speak with clarity and enthusiasm to crowds. Franklin was an ecumenist and approved of Whitefield's appeal to members of many denominations, but he was not himself converted. After one of Whitefield's sermons, Franklin noted the:

"wonderful...change soon made in the manners of our inhabitants. From being thoughtless or indifferent about religion, it seem'd as if all the world were growing religious, so that one could not walk thro' the town in an evening without hearing psalms sung in different families of every street."[9]

A lifelong close friendship developed between the revivalist preacher and the worldly Franklin. Looking beyond their public images, one finds a common charity, humility, and ethical sense embedded in the character of each man. True loyalty based on genuine affection, coupled with a high value placed on friendship, helped their association grow stronger over time.[10]

Whitefield is remembered as one of the first to preach to the enslaved. Phillis Wheatley wrote a poem in his memory after he died. In an age when crossing the Atlantic Ocean was a long and hazardous adventure, he visited America seven times, making thirteen Atlantic crossings in total. It is estimated that throughout his life, he preached more than 18,000 formal sermons, of which seventy-eight have been published[11][12] In addition to his work in America and England, he made fifteen journeys to Scotland—most famously to the "Preaching Braes" of Cambuslang in 1742—two to Ireland, and one each to Bermuda, Gibraltar, and the Netherlands. He also came to America in 1738 following John Wesley's departure to serve as chaplain to the Georgia colony at Savannah.

Whitefield died in the parsonage of Old South Presbyterian Church,[13] Newburyport, Massachusetts, on September 30, 1770, and was buried, according to his wishes, in a crypt under the pulpit of this church. A bust of Whitfield is in the collection of Gloucester City Museum & Art Gallery.

Relation to other Methodist leaders

In terms of theology, Whitefield, unlike John Wesley, was a supporter of Calvinism. The two differed on eternal election, final perseverance, and sanctification, but were reconciled as friends and co-workers, each going his own way. Whitefield was not primarily an organizer like Wesley; rather he was a man of profound experience, which he communicated to audiences with clarity and passion. His patronization by the Countess of Huntingdon reflected this emphasis on practice.

The First Great Awakening democratized religion by redressing the balance of power between the minister and the congregation. Rather than listening demurely to preachers, people groaned and roared in enthusiastic emotion; new divinity schools opened to challenge the hegemony of Yale and Harvard; personal revelation became more important than formal education for preachers. Such concepts and habits formed a necessary foundation for the American Revolution.[14]

In the early 18th century, slavery was outlawed in Georgia. In 1749, George Whitefield campaigned for its legalisation, claiming that the territory would never be prosperous unless farms were able to use slave labor.[15] He began his fourth visit to America in 1751 advocating slavery, viewing its re-legalisation in Georgia as necessary to make his plantation profitable.[16] Partially through his campaigns and written pleas to the Georgia Trustees, it was re-legalised in 1751. Whitefield then purchased slaves, who then worked at his Bethesda Orphanage. To help raise money for the orphanage, he also employed slaves at Providence Plantation. Whitefield was known to treat his slaves well; they were reputed to be devoted to him, and he was critical of the abuse of slaves by other owners.[17] When Whitefield died, he bequeathed his slaves to the Countess of Huntingdon.[18]

Whitefield's sermons were widely reputed to capture his audience's enthusiasm, and many of them as well as his letters and journals were published during his lifetime. He was an excellent orator as well, strong in voice and adept at extemporaneity. His voice was so expressive that people are said to have wept just hearing him allude to "Mesopotamia". His journals, originally intended only for private circulation, were surreptitiously published by Thomas Cooper. This led James Hutton to publish a version with Whitefield's approval. Exuberant and "too apostolical" language resulted in great criticism and his journals ceased publication after 1741. Although Whitefield prepared a new installment in 1744–45, it wasn't published until 1938, and nineteenth century biographies refer to an earlier manuscript. Whitefield published A Short Account of God's Dealings with the Reverend George Whitefield in 1740, which covered his life up to his ordination. In 1747, he published A Further Account of God's Dealings with the Reverend George Whitefield, covering the period from his ordination to his first voyage to Georgia. In 1756, a heavily edited version of his journals and autobiographical accounts was released. After his death, John Gillies, a Glasgow friend, published a memoir and six volumes of works, comprising three volumes of letters, a volume of tracts, and two volumes of sermons. Yet another collection of sermons was published just before he left London for the last time in 1769. These were disowned by Whitefield and Gillies, who tried to buy all copies and pulp them. They had been taken down in shorthand, but Whitefield said that they made him say nonsense on occasion. These sermons were included in a nineteenth century volume, Sermons on Important Subjects, along with the "approved" sermons from the Works. An edition of the journals, in one volume, was edited by William Wale in 1905. This was reprinted with additional material in 1960 by the Banner of Truth Trust. It lacks the Bermuda journal entries found in Gillies biography and the quotes from manuscript journals found in nineteenth century biographies. A comparison of this edition with the original 18th century publications shows numerous omissions—some minor and a few major.

Whitefield is honored together with Francis Asbury with a feast day on the liturgical calendar of the Episcopal Church (USA) on November 15.