Sweyn I Forkbeard (Old Norse: Sveinn Tjúguskegg; c.960 − 3 February 1014) was king of Denmark and England, as well as parts of Norway. His name appears as Swegen in the Anglo-Saxon Chronicle[2] and he is also known in English as Svein,[3] Swein,[4] Sven the Dane,[citation needed] and Tuck.[citation needed]

He was a Viking leader and the father of Cnut the Great. On his father Harald Bluetooth's death in late 986 or early 987, he became King of Denmark; in 1000, with allegiance of the Trondejarl, Erik of Lade, he was ruler over most of Norway. After a long effort at conquest, and shortly before his death, in 1013 he became the first of the Danish Kings of England.

The Church and currency

On the northern edges of the relatively recent Holy Roman Empire, with its roots in Charlemagne's conquests hundreds of years prior to Sweyn's time, Sweyn Forkbeard had coins made with an image in his likeness. The Latin inscription on the coins read, "ZVEN REX DÆNOR", which translates as "Sven, king of Danes".[5][6]

Sweyn's father, Harald Bluetooth, was the first of the Scandinavian kings to officially accept Christianity, in the early or mid-960s. According to Adam of Bremen, an 11th-century historian, Harald's son Sweyn was baptised Otto, in tribute to the German king Otto I,[7] who was the first Holy Roman Emperor. Forkbeard is never known to have officially made use of this Christian name. He did not use it on the coins he proudly sent forth, and when he was given the English crown by the Witenagemot of Anglo-Saxon nobles, in 1013, he took the crown as king Sweyn.[citation needed]

Many details about Sweyn's life are contested. Scholars disagree about the various, too often contradictory, accounts of his life given in sources from his era of history, such as the Anglo-Saxon Chronicle, Adam of Bremen's Gesta Hammaburgensis Ecclesiae Pontificum, and the Heimskringla, a 13th-century work by Icelandic author Snorri Sturluson.[8] Conflicting accounts of Sweyn's later life also appear in the Encomium Emmae Reginae, an 11th-century Latin encomium in honour of his son king Cnut's queen Emma, of Normandy, along with Chronicon ex chronicis by Florence of Worcester, another 11th-century author. 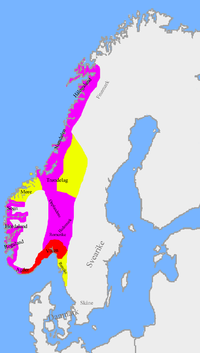 The map shows the division of Norway after the Battle of Svolder according to Heimskringla. Eirik Hákonarson ruled the purple area as a fiefdom from Sweyn Forkbeard. The yellow area was under Sveinn Hákonarson, his half-brother, held as a fief of Olof Skötkonung, the Swedish king. The red area was under direct Danish control, with Sweyn's ruling it as a Danish extension.

Some historians, such as Lauritz Weibull, have argued that Sweyn's wife described in the sagas – Swedish dowager queen Sigrid the Haughty – is purely fictional, whereas others have accepted her existence on the evidence of the Norse sagas. Weibull's conclusion is shared by Den Store Danske Encyklopædi, which identifies the queen as Gunhild.[1] In some of the old sources, such as the Jómsvíkinga saga, Sweyn appears as an illegitimate son of Harald Bluetooth, raised by the legendary Jomsviking and jarl of Jomsborg, Palnatoke. Sweyn is also depicted as a rebellious son, who led an uprising against his father in 987, and chased him out of the court, forcing him to abandon his kingdom. Harald apparently spent the rest of his days with the Slavs in Wendland,[9] within modern-day Germany.

Many negative accounts build on Adam of Bremen's writings; Adam is said to have watched Sweyn and Scandinavia in general with an "unsympathetic and intolerant eye", according to some scholars.[10] Adam accused Forkbeard of being a rebellious pagan who persecuted Christians, betrayed his father and expelled German bishops from Scania and Zealand. According to Adam, Sweyn was sent into exile by his father's German friends and deposed in favor of king Eric the Victorious of Sweden, whom Adam wrote ruled Denmark until his death in 994 or 995.

Historians generally have found problems with Adam's claims, such as that Sweyn was driven into exile in Scotland for a period as long as fourteen years. As many scholars point out, he built churches in Denmark throughout this period, such as Lund and Roskilde, while he led Danish raids against England.[11]

According to the chronicles of John of Wallingford, Sweyn was involved in raids against England during 1002–1005, 1006–1007, and 1009–1012, to revenge the St. Brice's Day massacre of England's Danish inhabitants in November 1002. Historians have considered the massacre as similar to a large-scale ethnic cleansing of the Danes in England orchestrated by Æthelred the Unready. Sweyn was believed to have had a personal interest in the atrocities due to his sister Gunhilde being amongst the victims.[12] 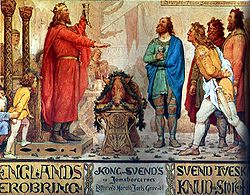 Some scholars have argued that Sweyn's participation may have been prompted by his state of impoverishment after having been forced to pay a hefty ransom. He needed revenue from the raids.[11] He acquired massive sums of Danegeld through the raids. In 1013, he is reported to have personally led his forces in a full-scale invasion.[15]

The contemporary Peterborough Chronicle (also called the Laud Manuscript), one of the Anglo-Saxon Chronicles, states, "before the month of August came king Sweyn with his fleet to Sandwich. He went very quickly about East Anglia into the Humber's mouth, and so upward along the Trent till he came to Gainsborough. Earl Uchtred and all Northumbria quickly bowed to him, as did all the people of Lindsey, then the people of the Five Boroughs. He was given hostages from each shire. When he understood that all the people had submitted to him, he bade that his force should be provisioned and horsed; he went south with the main part of the invasion force, while some of the invasion force, as well as the hostages, were with his son Cnut. After he came over Watling Street, they went to Oxford, and the town-dwellers soon bowed to him, and gave hostages. From there they went to Winchester, and the people did the same, then eastward to London."[16]

But the Londoners put up a strong resistance, because King Æthelred and Thorkell the Tall, a Viking leader who had defected to Æthelred, were in the city, and held their ground against him. Sweyn then went west to Bath, where the western thanes submitted to him and gave hostages. The Londoners followed suit, fearing Sweyn's revenge if they resisted any longer. King Æthelred sent his sons Edward and Alfred to Normandy, and retreated to the Isle of Wight, and then followed them into exile.[16] On Christmas Day 1013 Sweyn was declared king of England.

Based in Gainsborough, Lincolnshire, Sweyn began to organize his vast new kingdom, but he died there on 3 February 1014, having ruled England unopposed[citation needed] for only five weeks. His embalmed body was returned to Denmark, to be buried in the church he built in Roskilde.[17] He was succeeded as King of Denmark by his elder son, Harald II, but the Danish fleet proclaimed his younger son Cnut king. In England, the councillors had sent for Æthelred, who upon his return from exile in Normandy in the spring of 1014 managed to drive Cnut out of England. But Cnut returned and became King of England in 1016, while also ruling Denmark, Norway, parts of Sweden, Pomerania, and Schleswig.

His son Cnut and grandsons Harold Harefoot and Harthacnut ruled England for 26 years. After Harthacnut's death, the English throne reverted to the House of Wessex. Sweyn's descendents through his daughter Estrid continue to rule Denmark to this day. One of his descendants, Margaret of Denmark, married James III of Scotland, introducing Sweyn's bloodline into the Scottish Royal blood line. After James VI of Scotland inherited the English throne in 1603, Sweyn's ancestry was introduced into the English royal bloodline as well. Therefore, from 1603 on, all English and British monarchs are descended from King Sweyn of England, among others.

Adam of Bremen's writings about Sweyn and his father may have been influenced by Adam's desire to emphasize Sweyn's father Harald as a candidate for sainthood. He claimed that Sweyn, who was baptized along with his father, was a heathen. This may have been true, as much of Scandinavia was pagan at the time, but there are no data to corroborate the assertion. German and French records support that Harald Bluetooth was baptized.

According to Adam, Sweyn was punished by God for leading the uprising which led to king Harald's death, and had to spend "fourteen years" abroad - perhaps a Biblical reference from an ecclesiastical writer, as it refers to the symbolic number seven. Adam purports that Sweyn was shunned by all those with whom he sought refuge, but was finally allowed to live for a while in Scotland. As the Scottish king at the time had a reputation in Europe as a heathen and a murderer[citation needed], Adam's intention appeared to be to show that Sweyn belonged with heathens and was not fit to rule a Christian country. According to Adam, Sweyn only achieved success as a ruler after accepting Christianity.

Sweyn was tolerant of paganism while favoring Christianity, at least politically. By allowing English ecclesiastical influence in his kingdom, he was spurning the Hamburg-Bremen archbishop. Since German bishops were an integral part of the secular state, Sweyn's preference for the English church may have been a political move. He sought to preempt any threat against his independence posed by the German kings.[18] Contrary to Adam's writings, Sweyn did not appear to have reestablished paganism. There is no evidence of reversion to pagan burial practices during Sweyn's reign.[19] Whether King Sweyn was a heathen or not, he enlisted priests and bishops from England rather than from Hamburg.[18] This may have been another reason for Adam of Bremen's apparent hostility in his accounts. Numerous converted priests of a Danish origin from the Danelaw lived in England, while Sweyn had few connections to Germany or its priests.

Sweyn must have known that once the Archbishop of Hamburg-Bremen gained influence in Denmark, the German Emperor Otto II would not be far behind. His Slavic neighbours to the south-east had been all but annexed by Germany once Otto's father Otto I divided their lands into Bishoprics and put them under the "care" of the Holy Roman Emperor. Sweyn may have envisaged the same happening to his own territory.