This is a list of known Decepticons from the Transformers fictional universe and toyline.

Seeker was a term originally coined by fans to describe the Decepticon Jets of the same mode, eventually adopted by Hasbro and various comic continuities. Only Starscream, Skywarp and Thundercracker were named during Season 1 of the animated series. The name Sunstorm was given retroactively by toy-distributor E-Hobby to the previously unnamed yellow/orange Seeker. This was later picked up by comics publisher Dreamwave Productions. Starscream is also second-in-command of the Decepticons and notorious for trying to assassinate Megatron in order to take his place.

These characters essentially used the same mold as their Season 1 counterparts, but with small modifications. They are also known as the "Coneheads".

After Starscream is destroyed, Cyclonus takes over as second-in-command of the Decepticons.

The Combiners (more commonly known as Gestalts by the fans) are the Transformers who could combine with each other to form a larger robot.

The result of a program of experimentation initiated by the Decepticon Shockwave and carried out on captive Autobots to push the limits of transformation, the Triple Changers are the Transformers who could change into two different vehicles in addition to their robotic form.

Powermasters (Godmasters in Japan) are figures whose engines transformed into smaller figures (Nebulans) that, when combined with the host, allowed the figure to transform.

Pretenders are Transformers who had an inner robot secluded behind a protective outer shell.

Action Masters are posable figurines which could not Transform, however they came with accessories which transformed into weapons and animals. 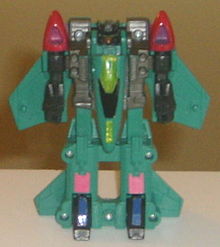 A major revamp of the Transformers line, which included new toys, a new comic book series from Marvel Comics and a re-edited release of the 1984 TV series.[1] 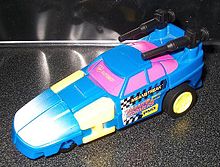 Not to be confused with G1 Powermasters, these figures had a wind-up wheel gimmick.

In Robots in Disguise, the Decepticons are a group of Autobot Protoforms recruited by the Predacons to serve Megatron/Galvatron.

For more details about the Action Figures, visit the 2007 Movie Toy-Line Section.

Transformers: Revenge of the Fallen

Constructicons are mass-prodused Transformers in the live-action film series, so there are sometimee more than one.

Hunt for the Decepticons toyline

Transformers: Dark of the Moon

Decepticons under the command of Soundwave.

Decepticons who could change their form into that of other robots.

Some of Shockwave's many experiments.

Three combiner drones created as an experiment by Shockwave for battle in the gladiatorial arenas of Kaon.

The Combaticons were the subject of Shockwave's first combiner experiment, but were considered a failure.

Decepticon drones who serve as foot soldiers and miners

Megatron's army of the undead Cybertronians brought to live by Dark Energon.