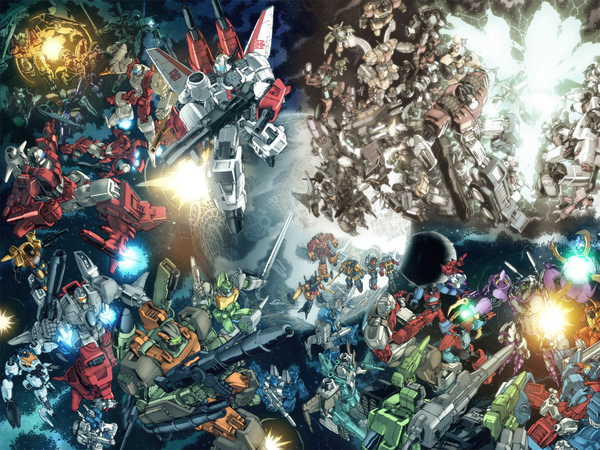 Following ' bankruptcy in 2005, IDW picked up the rights and hired long-time "Transformers" writer to craft a rebooted -based continuity, similar to .

The series is marketed as various for each story, [cite web|author=Denyer|title=A Note on Numbering|publisher=The Transformers Archive|url=http://www.tfarchive.com/comics/idw/numbering.php|accessdate=2007-03-31] in published order as ', ', ', ', ', ', ' and the upcoming '. The series also has a sister title of ongoing one-shots entitled "" which began in September 2006, each focusing on a particular character and impacting the storyline of the main title.

went bankrupt on January 4, 2005, and announced they would cease publication of all their comics, leaving ' and its series, ' incomplete. [cite news | title = Immediate Press Release - Dreamwave will be ceasing operations! | publisher = Seibertron | date = | url = http://www.seibertron.com/news/view.php?id=4495 | accessdate = 2007-01-31] Chris Ryall, editor-in-chief of leaped at the chance to bid on the property.

"Infiltration" had mixed reviews. Furman's decision to put leaders and on the sidelines divided many fans, as did the slow pace and human characters. Furman and Ryall responded positively, promising to make both fans and critics happy after reading various message board comments. [cite news|title=BotCon 2006 - Transformers Comics: Past, Present & Future|publisher=TFormers|date=|url=http://tformers.com/article.php?sid=6608|accessdate=2007-04-07] "" followed in July, set around the same time frame as "Infiltration", and had art by .

In September, the companion series, ' was launched, set to last for five issues. [cite news|author=Jay|title=IDW's Plans For Transformers Revealed At The 2006 San Diego Comic Con|publisher=Comic News International|date=|url=http://comicnewsi.com/article.php?catid=245&itemid=8842|accessdate=2007-04-07] Furman drew upon classic stories for Shockwave, re-created the personalities of Hot Rod and , and wrote for the first time. Nightbeat's story laid a vital seed for future stories,' began, a direct sequel to "Infiltration". It put Optimus and Megatron center stage, and bought in characters from the "Spotlights". The "Spotlights" expanded as IDW accepted Furman's willingness to write for any character. This has even included Wheelie, a character he has personally voiced criticism of in the past.

For the future, Furman has completely ruled out , as well as the (this may no longer be accurate, as they have appeared in a wall painting in Spotlight: Wheelie) and the . Furman has also expressed interest in re-inventing Japanese-exclusive characters, and , exploring the challenge of rationalizing gender in giant robots. Furman addressed the issue of gender in Transformers in a "Spotlight" issue on , rationalizing them as a failed attempt to introduce gender into the Transformer race by . [cite web |url=http://simonfurman.wordpress.com/2007/10/19/script-wrap-13/ |title=And the next Spotlight is...|accessdate=2007-10-19 |author=] Elita-One and a few other female Transformers have indeed appeared in "Megatron Origin".

During the Golden Age of , Nova Prime wishes to expand the influence of Cybertronians throughout the galaxy. His Chief Theoretical Strategist experiments with six volunteers to combine them into a superior being, but the experiment fails, resulting in Monstructor. At some point he also experiments with gender in Transformers, creating , who grows deranged with hatred for her creator due to this.

Later, hard times follow, with the s becoming a corrupt galactic police force. While shutting down an Energon-mining operation, they incite a riot by beating an outspoken miner to death. The riot is extinguished, resulting in the miners either dead or imprisoned. A surviving miner, , manages to take over a prison shuttle and hide it in Kaon, the seediest city on Cybertron.

The war devastates the planet, and a Decepticon scientist named suggests to graft Transformers with protective organic shells, which Megatron rejects. Thunderwing experiments on himself, becoming a beast who devastates Cybertron.

With their home world dead, the Transformers continue their war on other planets.

The Decepticon scientist Shockwave begins the secretive Operation: Regenesis — seeding energon on various planets, including . While stabilizing Earth's seeding, the Dynobots attack Shockwave, and they are all buried in molten lava for thousands of years.

In the meantime, Bludgeon returns to Cybertron and reawakens Thunderwing, believing that Thunderwing's destruction of planets will appease and revitalize the spirit of Cybertron. After is razed,

Prime decides to send Verity and her two friends Hunter and Jimmy home. and are given this task, but the Machination strikes and seemingly destroy Sunstreaker and Hunter.

The Machination performs a successful surgery on Hunter,

Elsewhere, emerges from the Dead Universe, destroys an alien observatory and crushes Hound's unit on Cybertron to retrieve the body of . While unconscious during his battle with Megatron, Prime encountered the presence of Nova Prime, and he meets with Nova's once-associate, . Monstructor escapes his prison and seeks revenge against Omega. He finds Omega along with Prime, and after battling him, Prime leaves Monstructor to be tended by . Elsewhere, Blaster's body is recovered from space. After more assassination attempts he discovers the traitor is an unwilling Beachcomber, controlled by Soundwave and Bombshell's cerebro shell. Angry, he vows to hunt down Soundwave.

Back on Earth Nightbeat puzzles out the links between the Machination's various actions. The returned Prime attempts to get proactive by moving the location of the Ark-19, but it is shot down by Sixshot, though the crew survive.

Elsewhere, the Autobot on Garrus-9 is attacked by the , who escape with the Monstructor component Transformers, forcing a reluctant to dispatch to track them down.

Skywatch, having lost control of Ravage and

On Cybertron , dispatched from the Dead Universe on a mission to activate the Nega-Core, inadvertently alerts the Autobots to his presence, but is still able to activate the Core, as well as its lethal guardian . On Garrus-9 Prime calls in the Wreckers to deal with the escalating situation as leads the forces of the Dead Universe from the Benzuli expanse. [Comic book reference|writer=|penciller=|title=|date=June 2008|publisher=] Meanwhile, Hardhead accompanies Nightbeat to Gorlam Prime in an attempt to find his missing memories. Attacked by , Nightbeat is taken control of by , and Hardhead reluctantly eliminates him, before disappearing into the dimensional portal. A furious Nemesis Prime realizes he must do Nightbeat's job of eliminating Optimus Prime personally. The Wrecker assault on Thunderwing proves futile, while Arcee teams up with to track down the escaped Monstructor, and prepares to use Thunderwing's technology to enable other Autobots to survive the effects of the Benzuli expanse. [Comic book reference|writer=|penciller=|title=|date=July 2008|publisher=] Dealer's attempt to retrieve the magnificence for himself backfires when a suspicious Hot Rod uses it to confirm his doubts about Dealer, and he is promptly killed. Hot Rod uses the Magnificence to locate the other Nega-Cores and their guardians ( and Monstructor) and passes the information on. Jetfire then formulates a plan to override Jhiaxus' control of them via taking over their mental link. [Comic book reference|writer=|penciller=|title=|date=August 2008|publisher=] Nemesis Prime attacks Optimus on Garrus-9 personally, but is betrayed and killed by Galvatron, whom Prime then tosses into a solar pool. Jetfire's plan works, as Cloudburst's team, now equipped with Thunderwing's technology, are able to dispose of the Nega-Cores in the Dead Universe, closing it off completely. Jhiaxus is hunted down on Gorlam Prime by Arcee and Hardhead (now undead like the Dead Universe crew), where his immortality means Arcee can kill him over and over. On Earth, Sideswipe, having beaten and , decides he has proven himself and leaves without Sunstreaker. Over the following years Gorlam Prime evolves into a new Cybertron, and its inhabitants into beings like Transformers. But on Garrus-9, Galvatron still lives within the solar pool. [Comic book reference|writer=|penciller=|title=|date=October 2008|publisher=]

One year after the initial battles on Earth, the Decepticons launch a full scale assault on , randomly annihilating buildings and causing mayhem as part of a simultaneous galaxy-wide assault. The initial human aerial counterattack fails, while the Autobots on Cybertron, including a comatose Optimus Prime, receive word of the attack. [Comic book reference|writer=|penciller=|title=|issue=1|date=July 2008|publisher=] Even opposed by Colonel Daniel Witwicky, the Decepticons decimate all further military assaults and destroy all bridges and tunnels leading into the city. [Comic book reference|writer=|penciller=|title=|issue=2|date=August 2008|publisher=] The Decepticon assault moves to other cities in the country, including , and , as the begin to build in what was once Manhattan. [Comic book reference|writer=|penciller=|title=|issue=3|date=September 2008|publisher=References