Houses can be built in a large variety of configurations. A basic division is between free-standing or detached dwellings and various types of attached or multi-user dwellings. Both sorts may vary greatly in scale and amount of accommodation provided. Although there appear to be many different types, many of the variations listed below are purely matters of style rather than spatial arrangement or scale. Some of the terms listed are only used in some parts of the English speaking world. 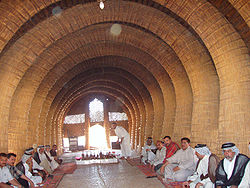 The interior of an Iraqi mudhif

Example of an early Victorian "Gingerbread House" in the USA, built in 1855.

Specific terms under various American federal, state, or local laws dealing with fair housing, truth in advertising, and so forth, have been proscribed and engender specific legal meanings. For example, in American housing codes, all "apartments" must contain a kitchen, bathing facilities, and a sleeping area, or else that term may not be used. This generates various differences within the English-speaking world, and the terms such as "single-family", "two-family", or "three-family" building, residence, house, home, or property can be generic and thus convey little or no building plan (style of building) information. Such terminology is most common in advertising and real-estate markets that offer leasing of such units, or sales of such buildings. 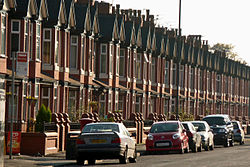 Example of late Victorian terrace in Moss Side, Manchester, UK.