Fictional representations of Mars have been popular for over a century. Interest in Mars has been stimulated by the planet's dramatic red color, by early scientific speculations that its surface conditions might be capable of supporting life, and by the possibility that Mars could be colonized by humans in the future. Almost as popular as stories about Mars are stories about Martians engaging in activity (frequently invasions) away from their home planet.

Mars in fiction before Mariner

Before the Mariner 4 spacecraft arrived at Mars in July 1965 and dispelled some of the more exotic theories about the planet, the conventional image of Mars was shaped by the observations of the astronomers Giovanni Schiaparelli and Percival Lowell. Schiaparelli observed what he took to be linear features on the face of Mars, which he thought might be water channels. Because the Italian for channels is canali, English translations tended to render the word as "canals", implying artificial construction. Lowell's books on Mars expanded on this notion of Martian canals, and a standard model of Mars as a drying, cooling, dying world was established. It was frequently speculated that ancient Martian civilizations had constructed irrigation works that spanned the planet in an attempt at saving their dying world. This concept spawned a large number of science fiction scenarios.

The following works of fiction deal with the planet itself, with any assumed Martian civilization as part of its planetary landscape.

Several early modern writers, including Athanasius Kircher and Emanuel Swedenborg, hypothesized contact with Mars. Early science fiction about Mars often involved the first voyages to the planet, sometimes as an invasion force, more often for the purposes of exploration. 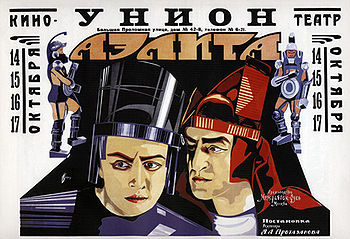 A 1927 Soviet poster advertising the 1924 movie Aelita: Queen of Mars, based on the novel by Aleksey Tolstoy. 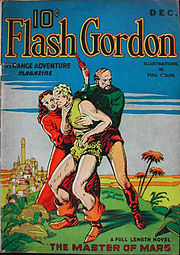 The Master of Mars, a Flash Gordon episode - the kind of pulp magazine which Brown's book tried to satirise

By the 1930s, stories about reaching Mars had become somewhat trite, and the focus shifted to Mars as an alien landscape. In the following stories, human contact and basic exploration had taken place sometime in the past; Mars is a setting rather than a goal.

Mars in fiction after Mariner

Beginning in 1965, the Mariner and Viking space probes revealed that the canals were an illusion, and that the Martian environment is extremely hostile to life. By the 1970s, the ideas of canals and ancient civilizations had to be abandoned.

Authors soon began writing stories based on the new Mars (frequently treating it as a desert planet). Most of these works feature humans struggling to tame the planet, and some of them refer to terraforming (using technology to transform a planet's environment).

A common theme, particularly among American writers, is that of a Martian colony fighting for independence from Earth. It appeared already in Heinlein's Red Planet and is a major plot element in Greg Bear's Moving Mars, Kim Stanley Robinson's Mars trilogy, and S.C. Sykes' books. It is also part of the plot of the movie Total Recall and the television series Babylon 5. Many video games also use this concept, such as the Red Faction and Zone of the Enders series. A historical rebellion of Mars against Earth is also mentioned in the Star Trek series of novels, which are not considered canon.

In the decades following Mariner and Apollo, the once-popular subgenre of realistic stories about a first expedition to Mars fell out of fashion, possibly due to the failure of the Apollo Program to continue on to Mars. The early 1990s saw a revival and re-envisioning of realistic novels about Mars expeditions. Early novels in this renaissance were Jack Williamson's novel Beachhead and Ben Bova's novel Mars (both 1992), which envisioned large-scale expeditions to Mars according to the thinking of the 1990s. These were followed by Gregory Benford's The Martian Race (1999), Geoffrey A. Landis's Mars Crossing (2000), and Robert Zubrin's First Landing (2002), which took as their starting points the smaller and more focussed expedition strategies evolved in the late 1990s, mostly building on the concepts of Mars Direct.

Several post-Mariner works are homages to the older phase of Mars fiction, circumventing the scientific picture of a dry and lifeless Mars with an unbreathable atmosphere through such science fiction generic staples as positing its future terraforming, or creating alternate history versions of Mars, where Burroughs' Barsoom, Bradbury's Martian Chronicles or The War of the Worlds are literal truth.

Nostalgia for the older Mars also frequently appears in comics and role-playing games, particularly of the steampunk genre:

Secondary references to Mars in film and television

In the following works of fiction, the Martian setting is of secondary importance to the work as a whole.

Mars is not only inhabited by little green men, but also by humans that had fled Earth after learning their continent was doomed. This civilization is ages ahead of Earth and have mastered things like: attracting and harnessing comets for heat and power, and predicting weather with their 'XN theory of weathercasting'. They also have Marsboy to protect them, a super-hero parallel to Superboy (SB No. 16/3, "Superboy on Mars").

In April 1956 Superman journeys through the time barrier to the thirtieth century A.D., where he, with the help of the Superman of 2956 (Craig King), attempts to apprehend a gang of "mystery-thieves" responsible for a rash of spectacular "scientific thefts." At one point, after Superman has intervened in an attempt to prevent the criminals from stealing some "giant robots" from the planet Mars, the villains callously smash the gates on the Martian canals, thereby threatening the immediate depletion of the Martians' entire supply of "precious water" and forcing the Man of Steel to abandon the hunt for the criminals long enough to repair the damage (Act No. 215: "The Superman of Tomorrow"). (See Superman of 2956; Vinson Vail)

In July 1958 Superman journeys to Mars to obtain an ancient statue from the ruins of the planet's extinct civilization. The statue is one of a series of so-called "space trophies" which the Man of Steel gathers for inclusion in a time capsule which the Metropolis Museum plans to bury in the ground as a gift for the people of the fiftieth century A.D. (S No. 122/1: "The Secret of the Space Souvenirs").

In a Decenber 1958 chronicle, Superboy is shown being exposed to Red Kryptonite for the first time by a green-skinned alien named Kozz who claims to be a native of the planet Mars (Adv No. 255, Dec 1958: “The Splitting of Superboy”).

In March 1986, in an imaginary sequence of events, the infant Kal-El's rocket lands on Mars instead of Earth. There, the super-powered baby is discovered by a group of Martian warriors and named "Skagerrak." After growing to an adult "warrior" himself, he then becomes the leader of the Martian civilization and eventually leads an assault fleet of "ships, saucers, ... and personnel carriers" to Earth. Once among human-kind, however, he comes to learn the nature of humanity and switches sides to become Superman and to help Earth repel the Martian invaders (S No. 417: "Warrior of Mars").

The Martian is a favorite character of classical science fiction; he was frequently found away from his home planet, often invading Earth, but sometimes simply a lonely character representing alienness from his surroundings. Martians, other than human beings transplanted to Mars, became rare in fiction after Mariner, except in exercises of deliberate nostalgia – more frequently in some genres, such as comics and animation, than in written literature.