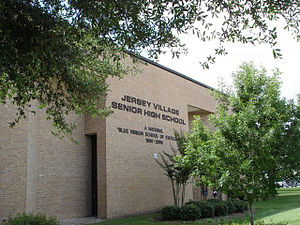 Jersey Village High School is located in Jersey Village, Texas, United States. The school, which serves grades 9 through 12, is a part of the Cypress-Fairbanks ISD. Ralph Funk serves as its principal.

Jersey Village High School serves the city of Jersey Village, small sections of Houston, and unincorporated sections of Harris County.[citation needed] A portion of the Near Northwest district is served by the school.[1]

The school mascot is the Falcon, which is similar to the original Atlanta Falcons logo, and the colors are purple and gold. Students from Jersey Village High School show their school pride and identify themselves to each other by flashing their left hand, palm outward, with the thumb, index finger, and middle finger erect so that the three fingers approximate the shape of "JV".

On May 21, 1998, a student brought a .38 caliber handgun in his backpack. The gun discharged when the student dropped the backpack, and the bullet hit a 15-year old female student in the leg.[3]

Schools that feed into Jersey Village include:[24]