North Mesquite, which serves grades 9 through 12, is a part of the Mesquite Independent School District. The total enrollment in 2002 was 2450; the school is therefore under the UIL AAAAA division. According to the MISD Report Card, the per student expenditure for the same 2002 period was 2700 USD. The stallion is the school mascot and the school colors are blue and white. The school's motto is Animus Omnia Vincit, which translates from the Latin as "Courage Conquers All." 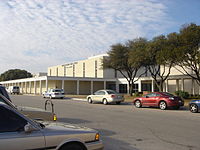 North Mesquite High School opened in September 1969 as the second high school in Mesquite ISD, behind Mesquite High School, the school's rival in athletic competitions. The original construction consisted of four floors: A, B, C, and D. Over several decades, the enrollment expanded in accordance with the population swell that took place in Mesquite and Sunnyvale, demanding supplementary facilities. In the 1990s, a new gym was constructed. F wing and E section opened for the 2002-2003 school year providing twenty new general classrooms as well as a new Band, Orchestra, and Choir hall. During the 2008-2009 school year construction on S wing (Science wing) began, and opened for the 2009-2010 school year providing 8 Labs and 16 science classrooms. With the science wing being added, the existing rooms on A floor were renovated and added new classrooms. The front of the school was renovated; a new entrance was created, and the business office was enlarged and renovated. The cafeteria was enlarged and snack lines were added.

North Mesquite serves northern portions of the city of Mesquite and the students in the MISD portion of southern Garland. Formerly, the school also served all high school students living in Sunnyvale. However, in an election on May 12, 2007, Sunnyvale residents passed a bond creating Sunnyvale High School. From the 2007-2008 school year, ninth grade students in Sunnyvale were housed in Sunnyvale Middle School for two years, until the construction of the high school was complete. Beginning in the 2009-2010 school year, students attended classes at the actual SHS campus. One grade was added consecutively to the high school, making the class of 2010 the last North Mesquite class that catered to Sunnyvale students.

All students in North Mesquite are required to dress according to a standardized dress code (similar to a school uniform) as of 2005; the code is used in all Mesquite ISD middle schools, high schools and 5th and 6th grades. See this link for more information about Standard Dress [1]

North Mesquite's rival is Mesquite High School. The rivalry dates back to when North Mesquite was founded in 1969. The school was the first to split from Mesquite High, which was then the only high school in the city, and thus the rivalry started. The Skeeters have won in football for the last 4 years.