Mirabeau B. Lamar Senior High School is a secondary school located at 3325 Westheimer Road in Houston, Texas, United States, with a zip code of 77098. Lamar High School, which serves grades 9 through 12, is part of the Houston Independent School District.

Lamar, which is located in the Upper Kirby district,[1] serves the Houston neighborhood of River Oaks, the incorporated city of West University Place, a portion of the city of Southside Place, and other Houston subdivisions.

The school has a business magnet program offering a wide array of business management courses, as well as cooperation with the Houston business community to provide internships and university scholarships.

The school handles grades nine through twelve. Lamar High School has neighborhood, Advanced Placement, and IB Diploma Programme (International Baccalaureate) programs. Lamar has one of two high school level IB Diploma programs in the Houston Independent School District and, therefore, is one of HISD's seven IB World Schools.[2] Lamar High School consistently has the greatest number of students who graduate with the IB Diploma in Texas [3] Lamar offers many International Baccalaureate Diploma classes, including several foreign languages: Chinese, French, German, Italian, Japanese, Latin, Spanish, and Russian. In 2006, 86 students were awarded the IB Diploma, and one-third of the school population consisted of candidates for the IB Diploma. Lamar has one of the largest IB Diploma program in North America

The school's mascot for its sports teams is the Redskins (see "Sports" section). There is a joke in the River Oaks community that states that River Oaks Boulevard is the only street with a country club at both ends. One is the River Oaks Country Club, and the "other" is Lamar High School.[4]

In 2009, the school was rated "recognized" by the Texas Education Agency.[5]

According to the overall information handout for 2009–2010, ethnic distribution was as follows: 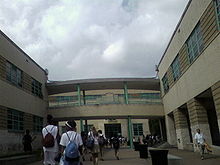 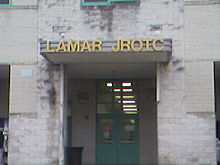 Entrance to the Lamar JROTC Building

The North Building is a four-story building (including the basement level) which was the original building built in 1936. Its consists of many classrooms, the main office, attendance office, magnet office, International Baccalaureate office, special education office, auditorium, band room, cooking room, and the choir room. It was built in a distinctive Art Deco style.

The West Building is a two-story building that was built in 1987. It consists of science laboratories and computer laboratories. Practice and performance gymnasiums are found in this building.

The two-story East Building was built at the same time as the West Building. It consists of senior classrooms, the cafeteria, art rooms, the news broadcast lab, the library, the theatre, book room, and JROTC rivalry rooms.

November 29, 2006, at 11:00am, groundbreaking for construction of a new $150,000 athletic storage building was held at the rear of the school complex and was attended by the donating Lamar Alumni Board, the Alumni Executive Director, contributors, HISD officials, Principal James McSwain, staff, and many students and parents. This is the first new building on the Lamar campus in 20 years. The building opened in July 2007 and contains storage for athletic equipment and air-conditioned toilet facilities.[6]

In the 19th century Michael Louis Westheimer, a German immigrant who arrived in Houston in 1859, bought a 640-acre (2.6 km2) farm at an auction for $2.50 per acre. On his property Westheimer established a school for local children, including some of his relatives from Germany. The path to the school became "Westheimer's Road," now called Westheimer Road.[7][8][9] 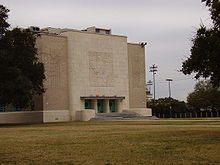 The entrance to the Lamar High School auditorium is decorated with a map of the state of Texas.

The Houston Independent School District built and established Lamar on the former site of Westheimer's farm in 1936. Earlier the Southampton Civic Club attempted to persuade Houston ISD to build Lamar at a lot along Kirby and West Alabama; the attempt failed and Lamar was built across from River Oaks.[10] Lamar opened in 1937 along Westheimer Road which was not paved.[11]

Lamar grew rapidly to the point where Robert E. Lee High School was built in 1962 to relieve Lamar.[12] Lamar became an IB school in 1982[13] and the Business Administration Magnet Program was established in 1989. In 2004, famous alumnus Tommy Tune performed at Lamar.[14] Robert Foxworth and Jaclyn Smith attended the performance.[15]

In September 1991 Lamar was one of 32 HISD schools that had capped enrollments: The school was at capacity and excess students had to attend other schools.[16] The graduating class of 2009 had the largest number of seniors Lamar ever had, with 886 students. The next class dropped to a little over 600 students.[citation needed]

In 2007, Lamar was ranked as in Jay Mathews Newsweek's lists of the top high schools in the United States.[17] Many students in other parts of Houston ISD transfer to Lamar to escape home schools that do not have a good academic performance, causing the attendance figures of those schools to suffer.[18]

In 2007 Todd Spivak of the Houston Press reported about the magazine's feature "These Kids Go to the Best Public High School in Houston." Spivak said that Lamar High School, which he described as "well-regarded," received a lower rating due a 66% graduation rate. Dr. Robert Sanborn, president and CEO of the Children at Risk organization, said that there was an achievement gap at Lamar between the top-performing students and the lowest-performing students.[19]

In 2007 22% of high-school-age children zoned to Lamar chose to attend a different Houston ISD school.[20] In 2009 the increasing number of students taking university preparatory classes applied to public universities due to the late-2000s recession.[21] In 2010 Lamar, which has a capacity of 2,525, was 740 students over capacity; Lamar is popular with students who do not want to attend their home schools.[22]

In 2010 Magnet Schools of America, a nonprofit, released a report recommending that Lamar's magnet program be abolished, due to overcrowding.[23]

Lamar as a filming location

The school is seen in the movie Rushmore.[24] In Rushmore the campus is used as the setting for Grover Cleveland High School.

The school was featured in the Chuck Norris film: Sidekicks.[25] 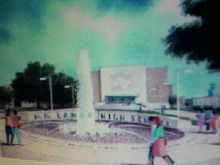 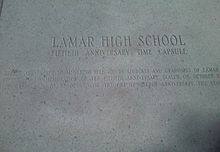 The Lamar Alumni Association started a campaign to improve the facilities at Lamar.[26] The campaign is called "Reach For The Stars." The alumni asked Lamar parents to donate money for this campaign. The goal is to raise $3 million. As of March 2007, $1.8 million had been raised.

The historic auditorium is the main focus of the project. It is where Tommy Tune, Jaclyn Smith, Paula Prentiss, and Robert Foxworth got their start in stardom. The auditorium currently consists of the 1936-style wooden seats and has dated sound, lighting systems, and stage.

On October 17, 1987, Lamar High School and its students celebrated its 50th anniversary by creating a time capsule to teach the students in the future how high school life was like in the 1980s. The time capsule was buried in front of Lamar's main entrance where it lies today. The plaque that marks where the time capsule lies is made from marble donated by the community of River Oaks and fund raising events held at Lamar at the time.

Lamar High School
Fiftieth Anniversary Time Capsule
HEREIN LIES MOMENTOS SELECTED BY STUDENTS AND GRADUATES OF LAMAR HIGH SCHOOL IN COMMEMORATION OF THE FIFTIETH ANNIVERSARY, SEALED ON OCTOBER 17TH, 1987. THE CAPSULE IS TO BE OPENED ON THE ONE HUNDREDTH ANNIVERSARY, THE YEAR 2037

Within Lee High School attendance boundary with Lamar as an option

Houston ISD provides school buses for students who live more than two miles (3 km) from the school or who have major obstacles between their houses and the school. Students are eligible if they are zoned to Lamar or are in the Lamar magnet program.

Before fall 2006, Lamar maintained a dress code allowing for students to wear most types of clothing.[42] Starting in the 2006-2007 school year, the school requires school uniforms.[43] Uniforms consist of monogrammed navy or white Lamar polo shirts and khaki bottoms. All shoe types are permitted, including flip-flops; female students are allowed to wear plaid skirts. The Texas Education Agency specifies that the parents and/or guardians of students zoned to a school with uniforms may apply for a waiver to opt out of the uniform policy so their children do not have to wear the uniform; parents must specify "bona fide" reasons, such as religious reasons or philosophical objections.[44]

Of the more than twenty HISD high schools that, as of 2007, had a standardized dress code or uniforms, Lamar was the only one that had a White plurality. The principal, James McSwain, cited safety concerns with a world after the Columbine High School massacre and the September 11, 2001 attacks as the reason for the school's adoption of uniforms. The newly created policy received opposition from some students and parents;[45] the policy was criticized in the May 16, 2006 Houston Chronicle by Alice Davidson in her "Screaming in the Halls" column in the "Yo! Houston" section of the newspaper.[46] Davidson was a student columnist who attended Lamar. The Houston Chronicle printed a feature about the Lamar uniform policy in the August 22, 2006 edition of the Yo! section;[47] the feature was written by Jessica Silverman, a student at Lamar as of 2006.[48]

In summer 2009, summer school students at Lamar were required to buy a uniform that differed from the regular Lamar uniform.[49]

Lamar High School's sports' mascot is the "Lamar Redskins." There were plans to phase out the "Redskins" into the "Rangers" as "Redskins" is considered derogatory to the Native American population. So far, the girls' dancing squad, the "Arrowettes", has been permanently given a new name (the "Rangerettes"). The Lamar Life Magazine announced that the traditional use of the "Redskin" mascot will continue; any new groups, awards, or other items will be called simply Lamar or may pick another name, such as the Rangerettes drill team.[citation needed]

The Lamar Redskins football program teams have reached the playoffs 30 times, which ties Baytown Lee for the highest-ranking team in Greater Houston area.[50]

Lamar has a tradition that when Lamar has a football game, students gather in the middle of the school between the North, West, and East Buildings to have a pep rally.[citation needed]

Sports at the school include:[51] 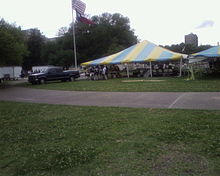 Lamar High School has its own news broadcast called Lamar Cable Television.[59] In LCT, students are the reporters and provide information about events at school and in the outside world. The entire program is student-run including grading. The class is supervised by Raymond Gayle who directed the movie Electric Purgatory.

In 2010 the school announced that it would replace its traditional school library with a coffee bar and electronic research center.[60] The coffee bar is operated by LHS's culinary program.[61]

Dalian No. 24 High School in Dalian, People's Republic of China has been Lamar's sister school since 2000.[62][63] Dalian is one of Houston's sister cities as designated by Sister Cities International.[64]

Schools that feed into Lamar

Elementary schools that feed into Lamar[27] include:

Middle schools that feed into Lamar include:

Schools that feed into Lee with Lamar and Westside as options

More schools feed into Lamar as all students zoned to Lee High School[35] may instead choose to go to Lamar High School or Westside High School.[38]

Elementary schools that feed into Lee (and therefore feed into Lamar) include:

Middle schools that feed into Lee (and therefore also feed into Lamar) include:

K-8 schools that feed into Lee (and therefore also feed into Lamar) include:

Private schools that matriculate some students into Lamar

Some students who are enrolled in private schools in the 8th grade choose to go to Lamar for high school. St. Mark's Episcopal School,[100] River Oaks Baptist School,[101] Presbyterian School,[102] and Annunciation Orthodox School[103] often have alumni who matriculate to Lamar.