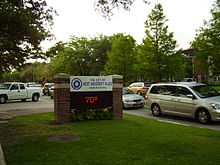 An electronic sign in the center of West University Place

West University Place, often called West University or West U for short, is a city located in the U.S. state of Texas within the Houston–Sugar Land–Baytown metropolitan area and southwestern Harris County, Texas, United States.[3] As of the 2000 U.S. Census, the population of the city was 14,211. The city is nicknamed "The Neighborhood City" and the city is mainly a bedroom community for upper-middle class families.

As of 2000, West University Place is the 8th wealthiest location in Texas by per capita income. West University continues to develop as one of the most desirable and affluent parts of the Houston area.

Almost all streets in West University Place are allusions to universities, colleges, and poets throughout the United States and the world.

The city was developed in 1917 by Ben Hooper, a former Tennessee governor. The name "West University Place" originated from its proximity to Rice University.[3] The first lots in the community were sold in 1917.[4] In the 1920s, Lillian "Lilly" Nicholson, a Rice University English major, lived with a friend whose father was a city planner. The city planner asked Nicholson and her friend to name the streets of West University Place. Nicholson took names from her English literature book and gave them to the streets in West University Place. As a result, many West University streets are named after authors, such as Geoffrey Chaucer, John Dryden, and William Shakespeare. Cydney Mackey, a family friend of Nicholson, said in a Houston Chronicle article "Aunt Lilly had always said she wanted to be an architect, unknown for women in that era, and this was her way of making a small but lasting mark on our city's landscape."[5] One street, Weslayan Road, is a misspelling of "Wesleyan."[5]

The city incorporated in 1924 because Houston was reluctant to extend power lines that far from the city center. West University Place, unlike Houston Heights, did not consolidate into the City of Houston.[3] Because of the 1923 incorporation, Houston did not incorporate West University Place's territory into its city limits, while Houston annexed surrounding areas that were unincorporated.[4] In 1939, the municipality refused to consolidate, later adopting a formal city charter the following year. The city had around 15,000 residents in the 1960s and the 1970s. The city had 12,714 people in 1990.[3]

Prior to 1992 West University Place liberalized its development rules. This allowed developers to build new houses within the city. Don Stowers of the Houston Post said that West University Place changed from an "aging middle class neighborhood" consisting of mid-20th century bungalows and cottages to an increasingly wealthy community of "dare we say, Young Urban Professionals in their austere red-brick Georgians."[6] As new houses appeared, property values increased and the city began to get more tax money. Eventually West University Place ran out of available lots, and its construction peaked. Area home buyers began to consider nearby Bellaire because it had more inexpensive and larger lots, and amenities described by Stowers as "comparable" to West University Place's amenities.[6]

According to the United States Census Bureau, the city has a total area of 2.0 square miles (5.2 km2), all of it land.

The city's boundaries are: Kirby Drive to the East, Union Pacific St. Louis Southwestern Railway railroad track to the West, Bellaire Boulevard/West Holcombe Boulevard to the South, and Bissonnet and Law Streets to the North. Viewed on a map, the city shape resembles a little house, with a "chimney" to the West side, and since it surrounds the City of Southside Place, a "door" is formed on the map surrounding Southside Place. (See map.)[citation needed]

The original housing stock of West University Place consisted of mid-20th century bungalows and cottages. Prior to 1992 the City of West University place liberalized its development rules, allowing for new houses to be built in the city. As lot sizes were typically about 50 feet (15 m) by 120 feet (37 m), the houses constructed were Georgian houses described by Don Stowers of the Houston Post as "lot hugging." Because nearby Bellaire had larger, more inexpensive lots, many area home seekers began to consider Bellaire.[6] In a 15-year period ending in 2002 around half of the existing houses in West University Place were torn down and replaced with newer houses.[9]

One subdivision in West University is called "Rice Court", which is located north of University Boulevard and east of Buffalo Speedway. Rice Court once was distinguished by blue tile markers; the markers began to disappear around the 1990s.[10] "Pemberton" is an area south of University Drive and east of Wakeforest Street. People living in the area were fond of restoration of older houses, and includes some of West U's more expensive homes.[9] There is another section called "Colonial Terrace" that is west of Weslayan Street and is near the railroad tracks. Originally it was the least developed part of West University Place. By 2000 this area was as built up and popular as other areas within West University Place.[11]

There were 5,286 households out of which 43.0% had children under the age of 18 living with them, 69.0% were married couples living together, 6.0% had a female householder with no husband present, and 23.2% were non-families. 19.4% of all households were made up of individuals and 6.6% had someone living alone who was 65 years of age or older. The average household size was 2.69 and the average family size was 3.11.

Claudia Feldman of the Houston Chronicle described West University Place as a "wealthy city inside a city" and "a tidy, orderly community, one where furniture matches, bills get paid and accomplished parents raise accomplished children."[12] John Nova Lomax, a journalist, stated in a 2008 Houston Press article that, due to the growth and dominance of Houston, municipal enclaves with their own services, including West University Place, "are little more than glorified neighborhoods."[13] 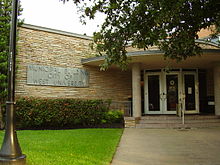 The Municipal Building of the city of West University Place 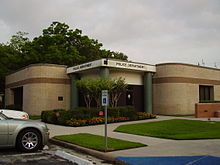 The city of West University Place operates under the Council-Manager form of government. The council contains the mayor and four city council members. The city council, elected on a non-partisan basis, is elected during the first Saturday in the May of every odd-numbered year. Each member serves a term of two years. Members may serve for not more than two successive terms in each office. The council enacts legislation, adopts budgets, establishes policies and appoints the city manager, city secretary, city municipal court judges, prosecutors, and clerks.[15]

A sign at the entrance into West University Place.

The city permits smoking within the single bar in the city limits, the Marquis II; in contrast, the City of Houston banned cigarette smoking within its bars in 2007.[21]

The city enforces a ban prohibiting drivers around West University Elementary School from talking on mobile phones during school zone hours.[22] AT&T tried and failed to persuade the city to not apply the ban. The West University City Council voted 5-0 to establish the ban; a person who violates the ban gets a $500 United States dollar fine.[23]

West University Place is in Texas's 7th congressional district; as of 2008 John Culberson is the representative.[29] The closest United States Postal Service office is the Weslayan Post Office at 5340 Weslayan Street, Houston, Texas, 77005-1048. 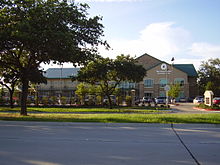 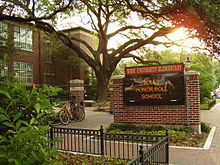 The city is within the Houston Independent School District.[43]

Gabriela Mistral Early Childhood Center is the closest public early childhood center to the city of West University Place. Only economically disadvantaged students, homeless students, students who are not proficient in English, or children of active-duty members of the U.S. military or whose parent has been killed, injured, or missing in action while on active duty.[54] Students who are eligible for HISD's preschools may attend any Early Childhood Center in Houston ISD. Beehive, a preschool located on the grounds of West University Elementary, serves many pupils from West University Place, Southside Place, and other communities. 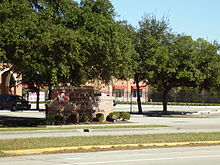 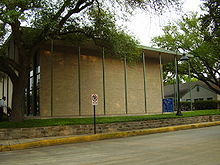 The West University Examiner is a local newspaper distributed in the community.[57]

The Village News is a local newspaper distributed in the community.