This article is about the township of Nutley in New Jersey. For the village in East Sussex, see Nutley, East Sussex.

Nutley is a township in Essex County, New Jersey, United States. As of the 2010 United States Census, the township population was 28,370.[4]

What is now Nutley was originally incorporated as Franklin Township by an Act of the New Jersey Legislature on February 18, 1874, from portions of Belleville Township. Nutley was incorporated as a Town on March 5, 1902, replacing Franklin Township.[8] Nutley was one of several Essex County communities that changed to the Township type during the 1970s in order to qualify for federal revenue-sharing aid only available to townships. Nutley derived its name from the estate of the Satterthwaite family, established in 1844, which stretched along the Passaic River and from an artist's colony in the area.[9][10]

New Jersey Monthly magazine ranked Nutley as its 38th best place to live in its 2008 rankings of the "Best Places To Live" in New Jersey.[11]

As of the 2000 census, 36.0% of town residents were of Italian ancestry, the 12th-highest percentage of any municipality in the United States, and fifth-highest in New Jersey, among all places with more than 1,000 residents identifying their ancestry.[16]

Nutley's population grew between the 1920s and 1960s due to a large influx of Italian immigrants and Italian-Americans. As of the 2000 Census, 44.5% of Nutley was of Italian descent.[17] 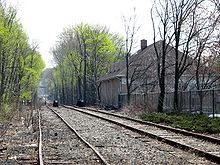 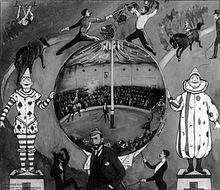 Annie Oakley performing at an amateur circus at Nutley in 1894, to raise funds for the Red Cross

The town of Nutley grew slowly as the Village of Newark developed. The first European settler in the area, recorded in the minutes of a Newark town meeting in 1693, was a Dutch painter named Bastian Van Giesen.[9]

His house, known as Vreeland Homestead, still stands today on Chestnut Street and is the location of the Nutley Women's Club. John Treat and Thomas Stagg purchased lots adjacent to Van Geisen's in 1695 and 1698 respectively. The Van Riper House is another building from the era.

The first brownstone quarry in Nutley is believed to have been in operation by the early 18th century and was the town's first major industry.[9] Jobs at the brownstone quarry in the Avondale section of Nutley provided work for many Italian and Irish immigrants. Mills situated along the Third River in the area now known as Memorial Park I became Nutley's second major industry.[9]

John and Thomas Speer, Joseph Kingsland, and Henry Duncan all operated mills in the town during the 1800s. Current streets in Nutley are named after these mill owners. Henry Duncan built several mills throughout the town and established the village of Franklinville consisting of 30 homes and a few small businesses which later became the center of Nutley.[9] One of Duncan's buildings has been modified and now serves as the town hall. Kingsland Manor is a national historic place.

Nutley's current town historian, John Demmer, is the author of the book in the "Images of America" series titled Nutley; Demmer is also part of The Nutley Historical Society,[18] a not-for-profit organization dedicated to serve the educational, cultural and historical needs of the community.

Several other passionate historical works on Nutley have been written by local historians, notably the late Miss Ann Troy's "Nutley: Yesterday - Today"; "Nutley" by Marilyn Peters and Richard O'Connor in the "Then and Now" series; and books about the Nutley Velodrome. Local resident Chris Economaki also wrote extensively about the Nutley Velodrome in his autobiographical racing history Let Them All Go! as the Velodrome was the first racetrack he had visited as a child.

Nutley is in the 8th Congressional district and is part of New Jersey's 36th state legislative district.[22] The township was relocated to the 28th state legislative district by the New Jersey Apportionment Commission based on the results of the 2010 Census.[4] The new district will be in effect for the June 2011 primary and the November 2011 general election, with the state senator and assembly members elected taking office in the new district as of January 2012.[22]

Essex County's County Executive is Joseph N. DiVincenzo, Jr.[26] The executive, along with the Board of Chosen Freeholders administer all county business. The county's Board of Chosen Freeholders consists of nine members, four elected on an at-large basis and one from each of five wards, who serve terms of office on a concurrent basis.[27] As of 2011 Essex County's Freeholders are Freeholder President Blonnie R. Watson (at large)[28], Freeholder Vice President Ralph R. Caputo (District 5)[29], Rufus I. Johnson (at large)[30], Donald M. Payne, Jr. (at large)[31], Patricia Sebold (at large)[32], Samuel Gonzalez (District 1)[33], D. Bilal Beasley (District 2)[34], Carol Y. Clark (District 3)[35] and Linda Lordi Cavanaugh (District 4).[36][37] 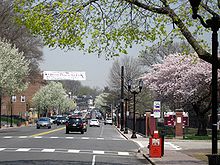 In recent years, on the national level, Nutley leans toward the Republican Party. In 2008, Republican John McCain received 52% of the vote here, defeating Democrat Barack Obama.[38]

After Hurricane Katrina devastated the central gulf coast region on August 29, 2005, Mayor Joanne Cocchiola and Commissioner Carmen A. Orechio reached out to local residents who wanted to help victims of the devastation, and formed the Operation Nutley Cares Committee. A decision was made to adopt Bay St. Louis, Mississippi as a sister city, Bay St. Louis, population 8,500, which sits just northwest of New Orleans, and had at least 60% of the community completely destroyed by Katrina and another 20% condemned. Monetary donations are still being accepted to help fund efforts to assist Bay St. Louis.

Hoffmann–La Roche US-section was formerly headquartered in Nutley, and was the site of the creations of the blockbuster medications Valium and Librium.[10]

Notable current and former residents of Nutley include: