Robert Blake (b. September 18, 1933) is an American actor who starred in the film In Cold Blood and the U.S. television series Baretta. In 2005, he was tried and acquitted for the 2001 murder of his wife, but on November 18, 2005, Blake was found liable in a California civil court for her wrongful death.

His father was born in Italy, arriving in the United States in 1907, and his mother was an Italian-American born in New Jersey. They married in 1929. In 1930, James worked as a die setter for a can manufacturer. Eventually, James and Elizabeth began a song-and-dance act. In 1936, the three children began performing, billed as "The Three Little Hillbillies." They moved to Los Angeles, California, in 1938, where the children began working as movie extras. 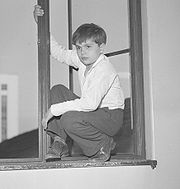 Then known as Mickey Gubitosi, Blake began his acting career when he appeared as Toto in the MGM movie Bridal Suite (1939) starring Annabella and Robert Young. Gubitosi then began appearing in MGM's Our Gang short subjects under his real name, replacing Eugene "Porky" Lee. He appeared in 40 of the shorts between 1939 and 1944, eventually becoming the series' final lead character. James and Jovanni Gubitosi also made appearances in the series as extras.

During his early Our Gang period, Gubitosi's character, Mickey, was often called upon to cry, and the young actor has been criticized for being unsubtle and unconvincing. He was also criticized for being obnoxious and whiny.[1] In 1942, he acquired the stage name Bobby Blake and his character in the series was renamed "Mickey Blake." In 1944, MGM discontinued Our Gang, releasing the final short in the series Dancing Romeo on April 29.

To date, Gubitosi is one of the few living Our Gang actors from the original series. Other notable surviving members are Dickie Moore, Jean Darling, Sidney Kibrick, Jerry Tucker, and Jackie Lynn Taylor. 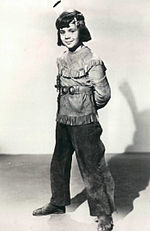 In 1944, Blake began playing an Indian boy, "Little Beaver," in the Red Ryder Western series at Republic Pictures, appearing in twenty-three of the movies until 1947. He also had roles in one of Laurel and Hardy's later films The Big Noise (1944), and the Warner Bros. movies Humoresque (1946), playing John Garfield's character as a child, and The Treasure of the Sierra Madre (1948), playing the Mexican boy who sells Humphrey Bogart a winning lottery ticket and getting a glass of water thrown in his face in the process.

According to Blake, he had an unhappy childhood with a miserable home life and was abused by his alcoholic father. When he entered public school at age ten, he could not understand why the other children were hostile to him. He had fights, which led to his expulsion. When he was fourteen, he ran away from home. The next few years were a reportedly difficult period in his life.[2]

Career as an adult

In 1950, Blake joined the Army. After returning to Southern California, he entered Jeff Corey's acting class and began working on improving both his personal and professional lives. He eventually became a seasoned Hollywood actor, playing notable dramatic roles in movies and on television. In 1956, he was billed as Robert Blake for the first time.

In 1959, he turned down the role of Little Joe Cartwright, a character ultimately portrayed by Michael Landon, in NBC's western television series Bonanza. Blake did appear that year as Tobe Hackett in the episode "Trade Me Deadly" of the syndicated western series 26 Men, which dramatized true stories of the Arizona Rangers. Blake also appeared twice as "Alfredo" in the syndicated western The Cisco Kid and starred in "The White Hat" episode of Men of Annapolis, another syndicated series. Blake appeared in various roles in the series Have Gun Will Travel and also guest starred on John Payne's NBC western The Restless Gun.

Blake performed in numerous motion pictures as an adult, including the starring role in The Purple Gang (1960), a gangster movie, and featured roles in Pork Chop Hill in 1959 and Town Without Pity in 1961 as well as Ensign Pulver (1964), The Greatest Story Ever Told (1965) and other films. In 1967, he played real-life murderer Perry Smith in In Cold Blood; Richard Brooks directed, adapting Truman Capote's non-fiction book for the film. 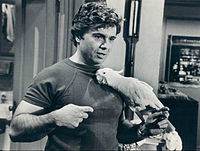 As Baretta with Fred.

Blake played an Indian fugitive in Tell Them Willie Boy Is Here (1969), a TV movie adaptation of Of Mice and Men (1981), and a motorcycle highway patrolman in Electra Glide in Blue (1973). He played a small-town stock car driver with ambitions to join the NASCAR circuit in Corky, which MGM produced in 1972. The film featured real NASCAR drivers, including Richard Petty and Cale Yarborough.

Blake may be best known for his Emmy Award-winning role of Tony Baretta in the popular television series Baretta (1975 to 1978), playing an undercover police detective who specialized in disguises. The show's trademarks included Baretta's pet cockatoo "Fred," his signature phrases — notably "That's the name of that tune" and "You can take that to the bank" — and a memorable theme song, "Keep Your Eye on the Sparrow," written by Dave Grusin and Morgan Ames and performed by Sammy Davis, Jr.

He continued to act through the 1980s and 1990s, mostly in television, in such roles as Jimmy Hoffa in the miniseries Blood Feud (1983) and as John List in the murder drama Judgment Day: The John List Story (1993), which earned him a third Emmy nomination. He also had character parts in the theatrical movies Money Train (1995) and Lost Highway (1997). In addition, Blake starred in the television series Hell Town, playing a priest working in a tough neighborhood.

In 1999, Blake met Bonnie Lee Bakley, formerly of Wharton, New Jersey, who reportedly had a history of exploiting older men for money, especially celebrities.[3] She was dating Christian Brando, son of Marlon Brando, during her relationship with Blake. Bakley became pregnant and told both Brando and Blake that they were the father. Initially, Bakley named the baby "Christian Shannon Brando" and stated that Brando was the father of her child.[4] Bakley wrote letters describing her dubious motives to Blake.[5] Blake insisted that she take a DNA test to prove the paternity.[4] Blake and Bakley married November 19, 2000 after DNA tests proved that he was, in fact, the biological father of her child, renamed Rose. It was his second marriage, her tenth.

Although they were married, Bakley lived in a small guest house behind her husband's house in the Studio City area of the San Fernando Valley.

On May 4, 2001, Blake took Bakley to Vitello's Restaurant on Tujunga Avenue in Studio City. Afterward, Bakley was killed by a gunshot to the head while sitting in the car, which was parked around the corner from the restaurant. Blake told the police he had gone back inside the restaurant to get a gun he left at the table and was there when the shooting occurred. The gun, a .38 caliber pistol, was tested and found not to be the gun that killed Bakley, which was determined to be a 9 mm pistol. Though witnesses in the restaurant testified that Blake indeed returned to the restaurant once, claiming that his wife had been shot, no witnesses claim to have seen him return prior to that; supposedly to retrieve the gun he left at the table where he and Bakley ate.

Arrest and trial for murder

Almost one year later, on April 18, 2002, Blake was arrested and charged in connection with the murder of his wife. His longtime bodyguard, Earle Caldwell, was also arrested and charged with conspiracy in connection with murder. A key event that gave the LAPD the confidence to arrest Blake came when a retired stuntman, Ronald "Duffy" Hambleton, agreed to testify against him.[6] Hambleton alleged that Blake tried to hire him to kill Bonnie Lee Bakley. Another retired stuntman and an associate of Hambleton's, Gary McLarty, came forward with a similar story.

According to author Miles Corwin, Hambleton agreed to testify against Blake only after being told he would be subject to a grand jury subpoena and a pending misdemeanor charge.[7] Hambleton's motives for testifying were called into question by Blake's defense team during the criminal trial.[8]

After Blake posted US$1 million bail, Caldwell was released, but a judge denied bail for Blake. On March 13, 2003, after almost a year in jail, Blake was granted bail, which was set at US$1.5 million, and he was allowed to go free to await trial. Blake was placed on house arrest during this time.

Blake's criminal trial for murder began in December 2004. On March 16, 2005, Blake was found not guilty of the murder of Bonnie Lee Bakley and of one of the two counts of solicitation of murder. The other count was dropped after it was revealed that the jury was deadlocked 11-1 in favor of an acquittal. Los Angeles District Attorney Steve Cooley, commenting on this ruling, called Blake a "miserable human being" and the jurors "incredibly stupid."[9] Blake's defense team, led by attorney M. Gerald Schwartzbach, and members of the jury responded that the prosecution had failed to prove its case.[10] Trial analysts also agreed with the jury's verdict.[11] On the night of his acquittal several fans celebrated at Blake's favorite haunt, Vitello's.[12]

Bakley's three children filed a civil suit against Blake, asserting that he was responsible for their mother's death. On November 18, 2005, the jury found Blake liable for the wrongful death of his wife and ordered him to pay US$30 million. On February 3, 2006, Blake filed for bankruptcy. Expressing disbelief that Blake was found liable by the jury in the civil trial, Schwartzbach (Blake's attorney in the criminal trial) vowed to appeal the jury verdict.[13]

According to the Associated Press, Schwartzbach filed the appeal brief on February 28, 2007.[14][15] The AP also reported that an LAPD Internal Affairs investigation has been opened regarding the lead detective in the murder case, Detective Ron Ito. The complaint, filed by Schwartzbach and civil trial witness Brian Allan Fiebelkorn, alleged that the detective failed to investigate leads that persons other than Robert Blake could have been responsible for the murder of Bonnie Lee Bakley.[16] Fiebelkorn testified that associates of Christian Brando may have been responsible for the murder of Ms. Bakley.[17] A defense theory of who may have been involved in the conspiracy to kill Bonnie Lee Bakley was laid out in a defense motion filed during the criminal trial proceedings.[18]

On April 26, 2008, an appeals court upheld the civil case verdict, but cut Blake's penalty assessment in half. Blake's attorneys had protested that jurors improperly discussed the Michael Jackson and O.J. Simpson verdicts during deliberations of his case, but the appeals judge ruled that such discussions were not improper.[19]

Blake has maintained a very low profile since his acquittal and his filing for bankruptcy with debts of $3,000,000 for unpaid legal fees and state and federal taxes[20] after the criminal and civil trials. Having retired from acting years before the murder of Bonnie Lee Bakley, and because of his legal issues, Blake has expressed that he might return to acting someday to help himself financially.[citation needed] On April 9, 2010, the state of California filed a tax lien against Blake for $1,110,878 with the Los Angeles County recorder of Deeds for unpaid back taxes.[21]