Collingswood is a borough in Camden County, New Jersey, United States. As of the 2010 United States Census, the borough population was 13,926.[5]

Collingswood was incorporated as a borough by an Act of the New Jersey Legislature on May 22, 1888, from portions of Haddon Township, based on the results of a referendum held that same day.[10]

Formerly part of the Newton Quaker Colony, the borough does not license any establishments to serve or sell alcoholic beverages inside borough limits, a policy that dates back to 1873.[11]

The Cooper River serves as the Northern border of Collingswood.

In September 2011, the borough experienced a "super downgrade" of its credit rating by Moody's, from A1 to Ba1, as a result of an outstanding multi-million dollar loan guaranty to a property developer.[20] 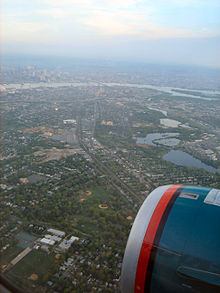 Collingswood's retail district is anchored by Haddon Avenue, a section of County Route 561 which runs from Camden to Haddonfield. Collingswood's downtown has over 20 restaurants with a variety of fare including American, Italian, Indian, French, Chinese, Mexican, Brazilian, Japanese, Ecuadorian, and Cuban cuisine.

On Saturdays from May to November, the town hosts a Farmers' Market under the PATCO line, featuring only local produce, baked goods, and crafts.

The American Planning Association has designated Haddon Avenue here as one of its 10 Great Streets for 2009.The group chose the street, which runs through Collingswood's business district, "for the way it melds the past with the present". Collingswood is the first New Jersey community to be cited under the association's Great Places in America program.

Collingswood sponsors a bike share program, a community greenhouse, as well as a composting program to encourage environmental stewardship.

Collingswood's arts community hosts "2nd Saturdays", with the town's art galleries and restaurants hosting new exhibitions by local, national, and international painters, sculptors, and photographers. Collingswood is also home to a growing theater scene, with the Collingswood Community Theatre and the Collingswood Shakespeare Company offering performances throughout the year. The Ballroom and Theater at Collingswood hosts local theatrical productions as well as national recording artists such as Ben Folds and The Beach Boys. Additionally, the borough's annual Collingswood Book Festival brings recognized authors including Camille Paglia and Joshua Piven of the Worst-Case Scenario series. Beginning in 2009, Collingswood hosted a Green Festival to raise awareness of environmental responsibility.

Knight Park and Haddon Avenue are the heart of Collingswood. Knight Park is the home to daytime recreation of the town. It is located across the street from Collingswood High School and it hosts the home games of the high school's sports teams, such as Women's Field Hockey, Lacrosse, baseball and softball. During the Summer months, the borough offers outdoor movies and classical concerts in Knight Park.

Collingswood has a large gay and lesbian community, Mayor Jim Maley was one of a handful of New Jersey mayors to perform midnight Civil Union ceremonies the day the state's Civil Union law took effect in 2006. In 2004, The Philadelphia Inquirer wrote about the borough's "fast growing gay and lesbian community," and the marriage equality organization Garden State Equality's main South Jersey office is in Collingswood.[37] Top Gun star Kelly McGillis married her partner Melanie Leis in Collingswood in 2010, and the couple reside in town.

In 2006, Philadelphia Magazine ranked Collingswood number one in the region for price growth of homes and property. Values were up about 100% over five years.[citation needed]

Collingswood has several historic homes, including the Stokes-Lees mansion, located in the 600 block of Lees Avenue, which dates back to the 18th Century, making it one of the oldest houses in Camden County.

Notable current and former residents of Collingswood include: