University of Science and Technology of China

University of Science and Technology of China

The University of Science and Technology of China (USTC; simplified Chinese: 中国科学技术大学; traditional Chinese: 中國科學技術大學; pinyin: Zhōngguó Kēxué Jìshù Dàxué) is a national research university in Hefei, People's Republic of China. It is a member of the C9 League formed by nine top universities in China. Founded in Beijing by the Chinese Academy of Sciences (CAS) in September 1958, it was moved to Hefei city in Anhui province in the beginning of 1970 during the Cultural Revolution.[1]

The inception and mission of USTC was in response to the urgent need for the national economy, defense construction, and education in science and technology. It has been featured by its competence on scientific and technological research and expended into humanities and management with a strong scientific and engineering emphasis. USTC has 9 schools, 23 departments, the Special Class for the Gifted Young, the Experimental Class for the Teaching Reform, the Graduate Schools (Hefei, Shanghai, Suzhou), School of Management (Beijing), the Software School, School of Network Education, and School of Continuing Education.

USTC was founded in Beijing by the Chinese Academy of Sciences (CAS) in September 1958, the Director of CAS, Mr. Guo Moruo was appointed the first president of USTC. The founding of the University is aimed at fostering high-level personnel of science and technology absolutely necessary for the development of the national economy, national defense construction, and education in science and technology. The establishment was hailed as "A Major Event in the History of Chinese Education and Science". CAS has supported USTC by combining most of its institutes with the departments of the university. USTC is listed in the top 16 national key universities, becoming the youngest national key university.[2]

In the beginning of 1970, USTC was moved to Hefei, the capital of Anhui province. Since 1978, USTC has initiated and implemented a series of open and reform measures with a forward-looking sense and innovative spirit. It recovered from the Cultural Revolution and achieved rapid development thereafter.

USTC set up the first graduate school in China in 1978 to effectively cultivate its postgraduate students. However, the main campus for graduate study in Beijing, where it was the first formal campus of USTC, was renamed Graduate School of the CAS later.

Since the 1990s, USTC has taken the initiative of adapting to the necessity and challenge of the development of science and technology, education, and social economy. In 1995, USTC was approved by the central government as one of the first batch of universities obtaining the support of construction in the National 9th Five-Year Plan and the "Project 211". In 1999, USTC was singled out as one of the 9 universities enjoying priority support from the nation's "Plan of Vitalizing Education Action Geared to the 21st Century". Since September 2002, USTC has been implementing its "Project 211" construction during the 10th National Development Plan.

The USTCers have mandated the use of USTC in English or Keda[科大] rather than the full name University of Science and Technology of China due to honored tradition and the desire to avoid confusion with many similarly named institutions.

With the motto "Studying diligently, making progress both in study and development of moral character", USTC has made distinguished achievements in talent fostering, scientific research and technology transfer, turning into an important base of high-qualified talent training and high-level scientific research for the nation. USTC is regarded by the Ministry of Science and Technology as one of the 4 universities with best scientific research performance in China. It ranks among the best in the review of Chinese top universities by the US journal "Science" and the French journal "Research".

There are 9 schools, 23 departments, the Special Class for the Gifted Young, the Experimental Class for the Teaching Reform, the Graduate School, School of Management (Beijing), the Software School, School of Network Education, and School of Continuing Education. USTC offers 43 undergraduate specialties, 17 first-category Ph.D. degree programs, 89 second-category Ph.D. degree programs, 105 second-category master degree specialties. It becomes the key base for the education of the Ph.D. students within the CAS. 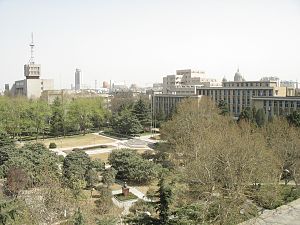 An overview of USTC, including the Teaching Building II and the library

A first-class campus computer network is running within the campus. Five public experimental centers for teaching and research is under construction, namely the Center of Physical Science, Life Science, Information Science, Engineering and Material Science, and Application of Synchrotron Radiation. 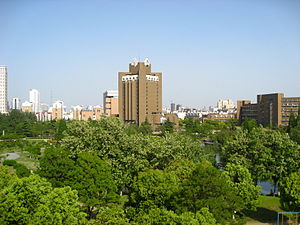 Transportation The campus bus runs from 7:00 am till 23:00 pm. The round-trip buses go through all 4 campus every 30 minutes, with direct-line buses run within 5 minutes between every the campuses. During the week, there are 130 bus-trips in one day, two dozen trips during the day of weekends or holidays. Boarding the bus, the teachers and students, using their E-card, are free of charge.

Hospital The school hospital, is a specific attachment to the university, and holds the aim of providing such services as disease prevention, health care, treatment and health education for the teaching staff and the students. After over forty years of development and construction, the hospital has been steadily expanded, the level of treatment has continuously improved, and the equipment has constantly been upgraded. The hospital covers 5,200 m2, with 110 beds and more than 110 employees.

The hospital is committed to the treatment and health care services for over 10,000 students, about 3,000 teachers and more than 700 retired employees, plus the families of the employees who live on the campus, which adds up to more than 20,000 people. A branch hospital and an outpatient department have been established separately on the west and the south campuses that are also centers for students' living and studying activities. The medical personnel are on duty around the clock for the convenience of the people.

In addition to carrying out daily diagnosis and treatment, the school hospital also, according to the college hygiene regulations, undertakes physical examination services under the principle of prevention. It is already a convention for students to take physical examinations both after their entrance and before graduation, and another check during their college years. Physical examinations are given every two years for school personnel and those who have retired.

To fulfill the demands of the science-major students for medical knowledge, the corresponding doctors of the school hospital have compiled a book titled Health Education for College Students, which, as the textbook for the selective course of health education, illuminates medical knowledge systematically from various angles. In recent years, this course has been taken by increasing numbers of students, and the title "advanced collective" has been bestowed on the hospital by the education authorities. 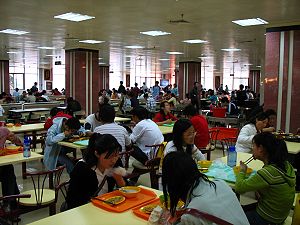 One Dining Hall on the East Campus

USTC actively encourages and push forward transfer of the research results and the industrialization of high and new technology. The University-Region (Enterprise) Cooperation Committee was established for the strengthening of the cooperation with the local governments and enterprises. It has established and developed the relationship of cooperation with some famous large and medium-sized enterprises such as the Daqing Petroleum Administration, Sinopec, the Bao Steel Group, Lenovo Group, and Haier Group. In total, 16 local governments and enterprises have become members of the USTC-Region (Enterprise) Cooperation Committee. Some research results incubation bases have been established, such as the Hefei National University Garden of Science and Technology, the Luohe Hi-tech Garden, the Guiyang Industrial Garden of Science and Technology, the Shanghai Research and Development Center, and the Shenzhen Futian Base of Industry, Teaching and Research. The Anhui Provincial Government and USTC have jointly presented the "Province-University Cooperation Program", fostering the industrialization of technological results. USTC also actively files applications for the "Seed Funds" established by prefectures and cities in China, sparing no efforts in making contribution to the regional economic construction and social development. 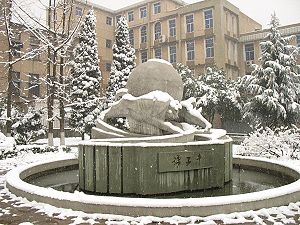 A sculpture near the library on the East Campus

USTC has concluded agreements of cooperation and exchange with around 100 universities and research institutions in more than 30 nations and regions. Around 300 international experts and scholars will visit USTC every year for lecturing and collaborative research. USTC has sent around 10,000 individual visits to more than 30 nations and regions for study and cooperative research.

Only the national laboratories and state key laboratories are listed below, while the former ones with higher qualification. USTC is the only university in mainland China which possess two National Laboratories at the same time.

Highlights: USTC set up the first graduate school in China in 1978 to effectively cultivate its postgraduate students.