Panama City
This article is about the national capital city of Panama. For the U.S. city of the same name, see Panama City, Florida.

Panama (Spanish: Panamá) is the capital and largest city of the Republic of Panama. It has a population of 880,691, with a total metro population of 1,272,672,[2] and it is located at the Pacific entrance of the Panama Canal, in the province of the same name. The city is the political and administrative center of the country, and a hub for international banking and commerce.[3] It is considered a Beta World City.[4]

With an average GDP per capita of $11,700,[5] Panama has been among the top five places for retirement in the world, according to International Living magazine. Panama City has a dense skyline of mostly highrise buildings, and it is surrounded by a large belt of tropical rainforest. It has an advanced communications system; and Panama's Tocumen International Airport, the largest and busiest airport in Central America, offers daily flights to major international destinations.

Panama City was chosen to be the American Capital of Culture for 2003 (jointly, with Curitiba, Brazil).

Panam was founded on August 15,1519 by Spanish conquistador Pedro Arias Dávila. The city was the starting point of expeditions that conquered the Inca Empire in Peru (1532). It was a stopover point of one of the most important trade routes in the history of the American continent leading to the fairs of Nombre de Dios and Portobelo, where most of the gold and silver that Spain took from the Americas passed through.[6] The city was destroyed by a devastating fire, when the pirate Henry Morgan sacked it on January 28, 1671. It was rebuilt and formally established on January 21, 1673 in a peninsula located 8 km from the original settlement. The place where the previously devastated city was located is still in ruins, and has become a tourist attraction known as "Panama Viejo".

Panama is located between the Pacific Ocean and tropical rain forest. The Parque Natural Metropolitano (Metropolitan Nature Park), stretching from Panama along the Panama Canal, has unique bird species and other animals such as tapir, puma, alligators, etc. At the Pacific entrance of the canal is the Centro de Exhibiciones Marinas (Marine Exhibitions Center), a research center for those interested in tropical marine life and ecology. Centro de Exhibiciones Marinas is managed by the Smithsonian Tropical Research Institute.

Tropical forests around Panama are vital for the functioning of the Panama Canal. These forests provide the canal with the water required for its operation (a rare example of a vast engineering project in the middle of the forest which actually helped preserve that forest). Due to the importance of the Canal to the Panamanian economy, tropical forests around the canal have been kept in an almost pristine state. Along the western side of the Canal is the Parque Nacional Soberania (Sovereignty National Park) which includes Summit botanical gardens and a zoo. In this national park, the best known trail is the Pipeline Road, popular among birdwatchers.[7]

Under the Köppen climate classification, Panama City has a tropical wet and dry climate. Panama City sees 1900 mm of precipitation annually. The dry season spans from January to April the wet season spans the remainder of the year. Temperatures remain constant throughout the year averaging around 27 °C (81 °F).

Downtown Panama from the yacht club

Panama's old quarter features many architectural styles, from Spanish colonial buildings to French and Antillean townhouses built during the construction of the Panama Canal.[9] The more modern areas of the city have many high-rise buildings, which together form a very dense skyline. There are currently more than 110 high-rise projects being constructed, with 127 high-rise buildings already built.[10] The city holds the 39th place in the world by highrise buildings count.[11]

The Centennial Bridge, that crosses the Panama Canal earned the American Segmental Bridge Institute prize of excellence together with seven other bridges in the Americas.[12]

The city is located in the Panama District, although its metropolitan area also includes the San Miguelito District, and some other populated areas from the opposite side of the Panama Canal. As in the rest of the country, districts are divided into corregimientos, in which there are many smaller boroughs. The old quarter, known as Casco Viejo, is located in the corregimiento of San Felipe. Twelve other corregimientos along with San Felipe form the urban centre of the city, including Santa Ana, El Chorrillo, Calidonia, Curundú, Ancón, Bella Vista, San Francisco, Parque Lefevre y Río Abajo.

The skyline of Panama City from Ancon Hill. 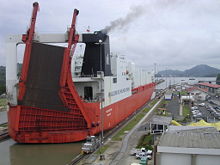 RORO carriers, such as this one at Miraflores locks, are among the largest ships to use the Panama Canal.

Being the economic and financial center of the country, Panama City's economy is service-based, heavily weighted toward banking, commerce, and tourism.[13] The economy is dependent, to a significant extent, on trade and shipping activities, associated to the Panama Canal, and port facilities located in Balboa. The city has benefited from significant economic growth in the latest years, mainly due to the ongoing expansion of the Panama Canal, an increase in real estate investment, and a relatively stable banking sector.[14] There are around eighty banks in the city, with at least fifteen of them being national. 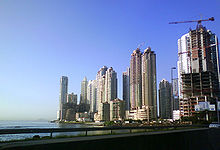 Panama City is responsible for the production of about 55% of the country's GDP. This is because most Panama businesses and premises are located in the city and its metro area.[15] It is a stopover for other destinations in the country as well as a tourist destination in its own right.

Tourism is one of the most important economic activities in terms of revenue generation. Hotel occupancy rate has always been relatively high for the city, having reached the second highest for any city outside the United States in 2008; after Perth and followed by Dubai.[16] However, hotel occupancy rates have dropped since 2009, probably due to the opening of many new luxury hotels.[17] Several international brands, such as Le Méridien, Radisson and RIU, have opened or plan to open new hotels in the city;[18] along with the previously operating ones under Marriot, Sheraton, InterContinental, and many other foreign and local brands. Also, the Trump Organization is currently building the Trump Ocean Club, their first investment in Central America;[19] and Hilton Worldwide plans to open The Panamera, the first Waldorf-Astoria Hotel in all Latin America.[20]

The City proper has around 813,097 inhabitants in the 23 Panama City boroughs.[21] The city, like all of Panama, is ethnically mixed, with mestizos, mulattos, Whites, and Asians all living together.[22]

Panamá Viejo ("Old Panama")[23] is the name used for the architectural vestiges of the Monumental Historic Complex of the first Spanish city founded on the Pacific coast of the Americas by Pedro Arias de Avila on 15 August 1519. This city was the starting point of the expeditions that conquered the Inca Empire in Peru (1532). It was a stopover point of one of the most important trade routes in the history of the American continent leading to the famous fairs of Nombre de Dios and Portobelo where most of the gold and silver that Spain took from the Americas passed through.[6]

The Committee decided to inscribe this property on the basis of cultural criteria (ii), (iv) and (vi), considering that Panamá was the first European settlement on the Pacific coast of the Americas, in 1519, and the Historic District preserves intact a street pattern, together with a substantial number of early domestic buildings, which are testimony to the nature of this early settlement.[24]

Built and settled in 1671, after the destruction of Panama Viejo by the privateer Henry Morgan, the historic district of Panama City (known as "Casco Viejo", "Casco Antiguo" or "San Felipe") was conceived as a walled city to protect its settlers against future pirate attacks. It was designated a World Heritage Site in 2003.

Casco Antiguo displays a mix of architectural styles, which in turn reflect the cultural diversity of the country: Caribbean, Republican, Art Deco, French and Colonial arquitecture mix in a site comprising around 800 buildings. Most of Panama City's main monuments are located in Casco Antiguo, including the Salón Bolivar, the National Theater (founded in 1908), Las Bóvedas, and Plaza de Francia. There are also many catholic buildings, such as the Metropolitan Cathedral, the La Merced Church, and the St. Philip Neri Church. The distinctive golden altar at St. Joseph Church was one of the few items saved from Panama Viejo during the 1671 pirate siege. It was buried in mud during the siege and then secretly transported to its present location.

Currently under an urban redevelopment process, the old quarter has become one of the main tourist attractions of the city, second only to the Panama Canal. Both government and private sectors are working on its restoration.[25]

The city has numerous tourist attractions. Particularly interesting for tourists are sites located in the old quarter, including:

The area immediately east of the Pacific entrance of the canal—known as the Amador Causeway—is being developed as a tourist center. The Smithsonian Tropical Research Institute operates a station and a small museum open to the public at Culebra Point on the island of Naos. A new museum, the Museum of Biodiversity or BioMuseo, is under construction on the causeway. It was designed by the American architect Frank Gehry, famous for the Guggenheim Museum Bilbao and the Disney Concert Hall in Los Angeles.[27] Just outside the city limits is the Parque Municipal Summit.

Throughout the twentieth century, Panama City has excelled in boxing, baseball and football. These sports have produced famous athletes such as Roberto Durán, Rommel Fernández and Rod Carew. At present, these sports have clubs and associations that manage their development in the city. Panama Metro is the city's baseball team. Boxing has its training centers in different gyms in the neighborhoods of the city. There are also many football clubs, such as

There are two main stadiums in Panama City: the National Stadium (also known as Rod Carew Stadium) and the Rommel Fernandez Stadium, with capacities of 27,000 and 22,000 respectively. It is also important to mention the Roberto Durán gymnasium, with a capacity of 8,000 fans.

Around 45% of the country's physicians are located in Panama City.[30] Most Panamanian doctors receive their degrees from local universities, although some of them receive additional U.S. or foreign training. The standards at the top hospitals compare favorably to those in the United States. Panama City is a common destination of medical tourism.[31]

Panama's international airport, Tocumen International Airport has two runways and is located on the eastern outskirts of the city where it is easily accessible. There are direct flights between Tocumen and New York, Newark, Washington, D.C., Los Angeles, Houston, Dallas, Orlando, Miami, Fort Lauderdale, Atlanta, Amsterdam, Madrid, Mexico City, Bogota and all major cities in the Caribbean area, Central America and South America, like Santiago de Chile. Panama City has a regional airport Marcos A. Gelabert, located in an area once occupied by Albrook Air Force Base. Marcos A. Gelabert Airport is the main hub for regional flights within Panama and the Pearl Islands in the Pacific and Bocas del Toro islands in the Caribbean.

Panama has a form of public transportation consisting of colorful painted buses colloquially known as diablo rojo. A diablo rojo is usually "customized" or painted with bright colors, usually depicting famous actors, politicians or singers. It is popular for bus drivers to customize the interior and exterior of their diablo rojo. There is a bus terminal near the Marcos A. Gelabert airport which together with the airport serves as the main transport hub for the rest of the country.

There are frequent traffic jams in Panama City due to the high levels of private transport ownership, per mile of traffic lane. In an attempt to curb traffic jams, President Ricardo Martinelli has brought forward a citywide metro system initially 14 km long, stretching across the city.[32] This new metro system along with the Metrobus[33] will replace the diablos rojos and also propel the city and country toward Panama's goal of entering the first world.