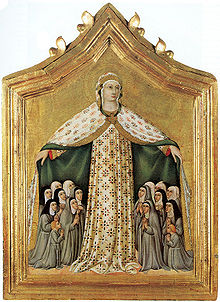 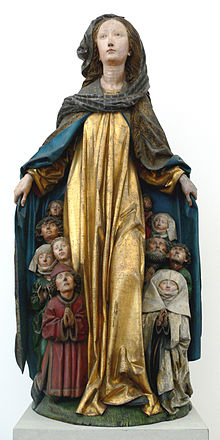 The "Ravensburger Schutzmantelmadonna", painted limewood of ca 1480, now in a Berlin museum

The Virgin of Mercy is a subject in Catholic art, showing a group of people sheltering for protection under the outspread cloak of the Virgin Mary. It was especially popular in Italy from the 13th to 16th centuries, often as a specialised form of votive portrait, and is also found in other countries and later art, especially Catalonia and Latin America. In Italian it is known as the Madonna della Misericordia (Madonna of Mercy), in German as the Schutzmantelmadonna (Sheltering-cloak Madonna), and in French as the Vièrge au Manteau or Vierge de Miséricorde (Virgin with a cloak or Virgin of Mercy).

Usually the Virgin is standing alone, though if angels hold up the cloak she is free to hold the infant Christ. The people sheltered normally kneel, and are of necessity shown usually at a much smaller scale. These may represent all members of Christian society, with royal crowns, mitres and a Papal tiara in the front rows, or represent the local population. The subject was often commissioned by specific groups such as families, confraternities, guilds or convents or abbeys, and then the figures represent these specific groups, as shown by their dress, or by the 15th century individual portraits. Sometimes arrows rain down from above, which the cloak prevents from reaching the people.[1]

Probably the oldest version known is a small panel by Duccio of ca. 1280, with three Franciscan friars under the cloak[2] Here the Virgin sits, only one side of the cloak is extended, and the Virgin holds her child on her knee with her other hand.

The immediate inspiration of the iconography comes from a vision reported in the Dialogus Miraculorum of the Cistercian Caesar of Heisterbach which circulated widely from about 1230.[3] Beyond that, the origins of the image may relate to rituals and a vision or miracle connected with a famous icon in the Blachernae Church in Constantinople.[4] This gave rise in Russian Orthodoxy to the Pokrov icons, although the image is not found in Byzantine art. In these the thought is similar, but the image less literal - the veil with which the Virgin protects mankind is small and just held in her hands.[5] The Western image is also found in some Eastern Orthodox icons, one of a number of Western iconographic features that infiltrated Orthodox art, whether in Cyprus under the Crusaders[6] or 16th century Eastern Europe.

Usually the image, whether in sculpture or painting, stands by itself, but in the most famous example, the Madonna della Misericordia altarpiece in Sansepolcro by Piero della Francesca, of 1445-62, the subject is the central panel of a large altarpiece, with a smaller Crucifixion above it, and many other panels. In the Spanish The Virgin of the Navigators of the 1530s, where those sheltered are a group connected with the Spanish voyages to the New World, including American indigenous peoples, the group are shown over a panorama of ships at rest in a harbour.

In Germany an almost identical image was used featuring Saint Ursula, usually holding her attribute of an arrow to avoid confusion.[7]

The image came in for special derision from Martin Luther, who compared it to "a hen with her chicks".[8]

The term "Virgin of Mercy" is found in a number of other contexts not directly related to the image. It is a common translation of the Eleusa type of icon of the Virgin and Child. The Virgin of Mercy is patron saint of Barcelona, celebrated in the week-long La Mercè festival each year, but in this role is not especially associated with this type of image. The Order of the Blessed Virgin Mary of Mercy, founded, also in Barcelona, in 1218 by Saint Peter Nolasco, has used the image but is not particularly associated with it.

In Santería, the Virgin of Mercy is syncretized with Obatala.