Costumes of the rich women of Urfa in the early 20th Century.

Şanlı (from Arabic shan (شأن) "dignity" + Turkish adjectival suffix -lı) means "great, glorious, dignified" in Turkish, and Urfa was officially renamed Şanlıurfa (Urfa the Glorious) by the Turkish Grand National Assembly in 1984, in recognition of the local resistance in the Turkish War of Independence. The title was achieved following repeated requests by the city's members of parliament, desirous to earn a title similar to those of neighbouring cities 'Gazi' (veteran) Antep and 'Kahraman' (Heroic) Maraş.

The history of Şanlıurfa is recorded from the 4th century BC, but may date back to 9000 BC, when there is ample evidence for the surrounding sites at Duru, Harran and Nevali Cori.[3] It was one of several cities in the Euphrates-Tigris basin, the cradle of the Mesopotamian civilization. According to Turkish Muslim traditions Urfa (its name since Byzantine days) is the biblical city of Ur, due to its proximity to the biblical village of Harran. However, some historians and archaeologists claim the city of Ur is in southern Iraq. Urfa is also known as the birthplace of Job. 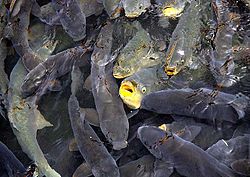 According to tradition, Nimrod had Abraham immolated on a funeral pyre, but God turned the fire into water and the burning coals into fish. 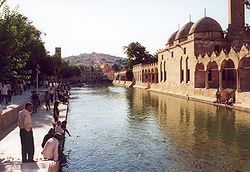 The pool of sacred fish remains to this day.

Urfa was conquered repeatedly throughout history, and has been dominated by many civilizations, including the Ebla, Akkadians, Sumerians, Babylonians, Hittites, Hurri-Mitannis (Armeno-Aryans), Armenians, Assyrians, Chaldeans, Medes, Persians, Macedonians (under Alexander the Great), Seleucids, Arameans, Osrhoenes, Romans, Sassanids, Byzantines, and Crusaders.

The city of Edessa

In the Byzantine period Edessa was a powerful regional centre with churches, schools and monasteries.

The age of Islam

Islam first arrived around 638 C.E., when the Rashidun army conquered the region without a fight. Islam was then established permanently in Urfa by the empires of the Ayyubids (see: Saladin Ayubbi the Kurdish warrior), Seljuks and Ottoman Turks. In the aftermath of the First Crusade, the city was the center of the Crusader County of Edessa, until 1144, when it was again captured by the Turk Zengui, and most of its inhabitants were slaughtered together with the Latin archbishop (see Siege of Edessa). For the ten years following the Turkish capture, Urfa was at the center of European history, since the very reason for which the Second Crusade was launched was the city's recapture. While it began with an enthusiastic massacre of Jews in western Europe and the presence of an Emperor and a King of France gave it much lustre, it was a disaster, its only success recorded resulting from auxiliary operation when an English fleet took from the Arabs and passed into the hands of the future King of Portugal the city of Lisbon.[4]

Under the Ottomans Urfa was a centre of trade in cotton, leather, and jewellery. There were three Christian communities: Assyrians, Armenian, and Latin. According to Lord Kinross,[5] 8,000 Armenians were massacred in Urfa in 1895. The last Syrian Christians left in 1924 and went to Aleppo (where they settled down in a place that was later called Hay al-Suryan "The Syriac Quarter").[6]

The First World War and after

At the end of World War I, with the Ottoman Empire defeated, and European armies attempting to grab parts of Anatolia, first the British and then the French occupied Urfa. The British occupation of the city of Urfa started de facto on 7 March 1919 and officially as of 24 March 1919, and lasted till 30 October 1919. French forces took over the next day and their uncomfortable presence, met by outbursts of resistance, lasted until 11 April 1920, when they were defeated by local resistance forces (the new Turkish government in Ankara not being established, with the National Assembly declared on 23 April 1920.

The French retreat from the city of Urfa was conducted under an agreement reached between the occupying forces and the representatives of the local forces, commanded by Captain Ali Saip Bey assigned from Ankara. The withdrawal was meant to take place peacefully, but was disrupted by an ambush on the French by irregular forces at the Şebeke Pass on the way to Syria, leading to 296 casualties among the French, and more among the ambushers. 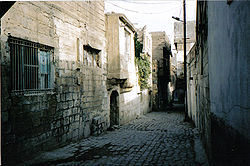 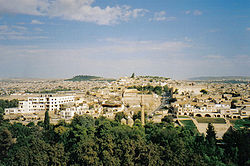 The skyline of Şanlıurfa as viewed from the Castle which dominates the City Centre.

Modern Şanlıurfa presents stark contrasts between its old and new quarters. The old town is one of the most evocative and romantic in Turkey, with an ancient bazaar still visited by local people to buy fruit and vegetables, where traditionally dressed and scarfed Arab and Turkish villagers arrive in the early morning to sell their produce. Much of the old town consists of traditional Middle Eastern houses built around courtyards, invisible from the dusty streets, many of which are impassable to motor vehicles. In the narrow streets of the bazaar people scurry to and from carrying trays of food, which is eaten on newspapers spread on low tables in a corner of the little shops, many people drinking water from the same cup. This very oriental atmosphere is bewitching but below the surface parts of the old city are very poor indeed, with people still living in cave houses (built into the side of the rock).

Although most of the residents are from ethnically different backgrounds, such as Arab or Kurdish, with Arabic and Kurdish languages being widely spoken along with the Urfa dialect of Turkish, the local population feels largely assimilated into Turkish society, with very little open political support for Arab or Kurdish nationalism. There is also a large Turkmen population, mainly consisting of the Baraks. Urfa is regarded in Turkish popular sentiment as being the most devout city in Turkey after Konya. It is a stronghold of the governing Justice and Development Party.

The climate of the region being mostly arid, the plains of Urfa and Harran are hot and dry. However, since the early 1990s Şanlıurfa has made huge leaps of development thanks to the Southeastern Anatolia Project, that provided a reliable supply of water for local farmers and fostered a real agricultural boom in every cultivar, but especially organic cotton production. This in turn is driving significant development of medium and light industry in the city itself. Hence, unemployment and poverty are present on a way smaller scale than in other Eastern Turkish cities, and many luxury cars can be spotted on the streets of Urfa. The huge reservoir is also a spectacular sight, hosting regular water-sports tournaments, also offering the commodity of many waterfront restaurants.

As the city of Urfa is very deeply rooted in history, so is its unique Cuisine, an amalgamation of the cuisines of many civilizations that have ruled in Urfa, since the Prophet Abraham and the Sumerian times and many dishes carry names in Arabic, Syriac, Turkmen, and even Armenian. At the first glance, it carries the staple of the Eyalet of Aleppo in a very classic, albeit in a very spicier manner;

There are very important pieces of work done on the Urfa cuisine as it is widely believed that Urfa is the birthplace of many dishes, including Raw Kibbé (Çiğ Köfte), that according to the legend, was crafted by no-one else but the Prophet Abraham himself from the ingredients he had in hand.[9]

Urfa is also known throughout Turkey and the bordering Syria for its very rich kebab culture, making large use of lamb meat, fat and offal.

The offal has also a primordial place in the regular Urfa Cuisine, being prepared in more than two hundred different ways.

Urfa's meze menu is also very rich, and carries a great variety, mostly unknown in other parts of Turkey, such as the "Ağzı Yumuk" or the "Semsek".

One will note, from the vegetables used in the Urfa cuisine, a lot of endemic varieties like the "'Ecır" or the "Kenger", and of course, the "İsot", the legendary local red capsicum that is a smaller and darker cultivar of the Aleppo pepper that takes a purplish black hue when dried and cured, used to flavor a lot of dishes, even a variety of ice cream.

The cuisine also makes a lot extensive use of the eggplant and attributes more than a hundred recipes to that item only.

Unlike most of the Turkish cities that use different versions of regular butter in their regional cuisine, Urfa is, together with Antep, Mardin and Siirt a big user of clarified butter, made exclusively from sheep's milk, called locally "Urfayağı" ("Urfabutter"). Other than that, Urfa is a heavy consumer of quality Olive oil, that mostly arrives into the city from nearby Syria.

Among Urfa's classic sweets, one should definitively count the "Şıllık", that is a coarse walnut ground covered in sweet pastry, the Kahke, flavored with aniseed and baked in a steamer, and the "Külünçe", that is a masonry oven baked pastry item in a way similar to the Iraqi Kleyça.

The bitter Arab coffee "Mırra" and the coffee substitute drink made from wild terebinth "Menengiç kahvesi" are among the most common hot beverages of Urfa.

-The legend of the "isot" goes that during the French invasion and subsequent occupation of the early 1920s, the people of Urfa were at first not much concerned about their city being invaded and their homes looted. They apparently only began the armed resistance when they heard the French were marching in their capsiucum fields.

-Although well connected to the Turkey's highways and with a decent industrial production, Urfa is not a huge metropolis, but still a large city. Known for its relative conservatism (most restaurants do not serve Alcohol), many coffee-houses have separate sections for families or groups of single-men (unlike the most of Turkey).

-An important local tradition usually associated with Urfa and Mardin is the "Sıra Gecesi", where groups of young men gather at each others home following a preestablished sequence, especially in winter evenings, to play Ottoman Instruments such as Kanun Ud and Bağlama, sing regional classics and to eat together. Kebabs, Rakı and Çiğ Köfte are the indispensable staples of these evenings.